It hurts that Vaughn's suspension will be on Wednesday during an important match against the Chicago Sky. But it's also an opportunity for another player who is a better fit for the team's long term plans.

Share All sharing options for: Stefanie Dolson will have a huge opportunity in light of Kia Vaughn's suspension

The WNBA has suspended Washington Mystics center Kia Vaughn for one game. This is due to an elbow she threw at Connecticut Sun forward Chiney Ogwumike's head early in the third quarter during their Sunday game. A screenshot of the elbow is below: 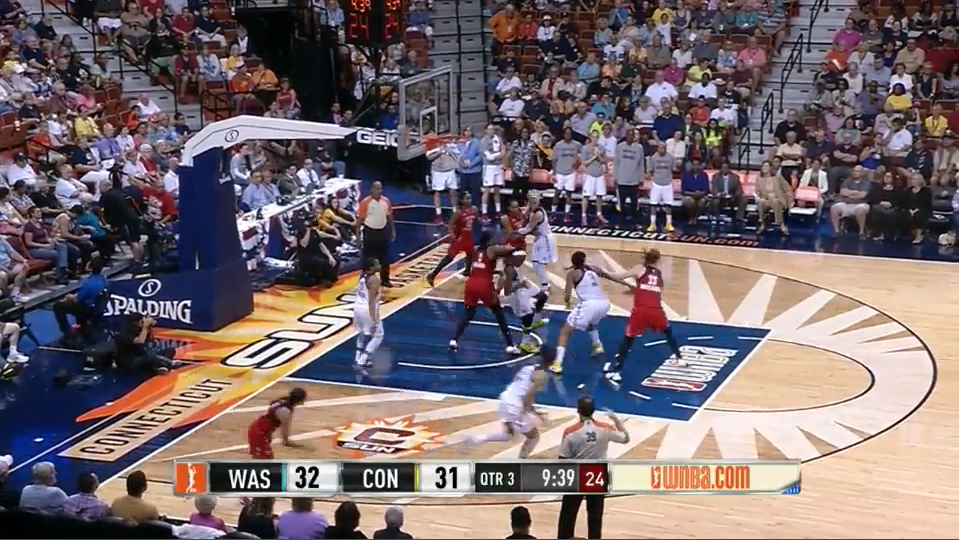 Though Vaughn was not ejected at the time, the league determined that it was a flagrant foul, and dealt with the matter accordingly.

On top of that, reserve guard Kara Lawson will be out at least one week due to a left ankle sprain suffered in that Connecticut game. But I will focus more heavily on the low post for this piece, since I think the guards can hold their own without Lawson. They've managed without her before.

So, Vaughn's absence is a blow for the Mystics, and she has played a big role in their playoff push. But instead of looking at the negative here, I actually view this as a HUGE opportunity for another player on this roster. A player who figures to have a future in D.C. longer than Vaughn will.

That player is Stefanie Dolson.

Dolson is the Mystics' top 2014 draft pick, yet she hasn't had a chance to start a game this season to this point. It is mostly because of Kia Vaughn, because she has played very well this season, and I'll add this. Vaughn should be starting over Dolson anyway. Here are some statistics between the two centers below, via Basketball Reference:

As you can see, Vaughn is doing considerably better than Dolson on the PER rating, and TOV%. In fact, she is averaging a career low in TOV% at 12.6%. All on a team where she has a high usage rating of 21.4% and a team that has been turnover prone throughout 2014. Then Vaughn is also not as foul-prone per Dolson, once you take into account their per 36-minute statistics.

However, with Vaughn out of the picture for Wednesday, Dolson is almost definitely going to be the starting center on Wednesday, but it's not like she's going to be a liability. In fact, you could make an argument that she should get more chances to start sooner, rather than later.

Yes, Dolson has a really bad TOV% rate at 24.2%, and her foul rate is also nothing to be proud of. But those are probably the only major statistical woes she has.

There are areas where Dolson is outperforming Vaughn in as well. First, she has a considerably higher FG%age and a higher FT rate, which means more opportunities for more points. Second, Dolson is a much better free throw shooter as well, where she make 79.3% of her shots at the line. Vaughn only makes 61.5% of hers.

Third, Dolson's individual defensive rating is identical to Vaughn's at 95. Yes, her individual offensive rating is below Vaughn's, and the same with PER, but that's likely because of her turnover rate, which should go down as her career progresses. And during a game where Dolson doesn't turn the ball over at an insane rate, it's not out of bounds to say that she should be on the floor more than Vaughn.

So yeah, it stinks to see Vaughn suspended for Wednesday, and she'll come back strong after it. But Dolson should be more than able to show why she should be the Washington Mystics' starting center herself, sooner, rather than later.

And now is her chance to do just that.