In a game with playoff hopes at stake for both teams, the veteran Seattle Storm overwhelmed the young Tulsa Shock to get a big 74-68 win that keeps the Western Conference playoffs complicated.

After the Tulsa Shock pushed their lead back to its height of 13 with 7:03 left in the third quarter, the Seattle Storm would mount a comeback to steal the momentum and earn a season-sustaining 74-68 win.

Star point guard Sue Bird had 10 of her team-high 22 points in the fourth quarter to help will the Storm to victory offensively. On the interior, post players Crystal Langhorne and Camille Little dominated the paint to help the Storm establish a 20-4 advantage in points in the paint in the second half. All told, Seattle outscored Tulsa 38-19 over the final 17 minutes of the game as the younger team simply never found answers as the Storm stepped up.

"We played with a lot more energy," Storm coach Brian Agler said about what happened in the second half. "It took us a little bit to get it going, but then we got some flow and hit a couple three-point shots and got Sue and Tanisha coming off the pick and roll. The two main things are: points in the paint completely changed from the first half to the second, and then we didn't turn the ball over."

And while the Storm deserve ample credit for the win - especially their three second half turnovers - there's simply no avoiding that a young Shock team fell apart when presented with the opportunity to gain ground on seizing their first playoff berth since relocating to Tulsa.

The Shock began to settle for more perimeter shots against the Storm's gritty defense while they were only able to get rushed and contested shots in the paint. As the Storm mounted their comeback, the Shock seemed to get more frustrated and moved the ball less as they tried to force their way back into the lead - they had just five assists in the second half.

"They stepped up their defense, were aggressive and got to the free-throw line," said game-high scorer Skylar Diggins (23) according to a Storm release. "We both shot bad from the free-throw line - they just shot twice as many as we did and made a few more. You have to credit them for that. They took advantage of us in the second half."

The combination of settling for outside shots and not working the ball inside contributed to them getting just 9 free throws in the second half while the Storm shot 19. Compounding matters, four of the Shock's starters played nearly the entire second half with Glory Johnson and Courtney Paris looking visibly spent leaving the Shock to miss the shots they were taking. 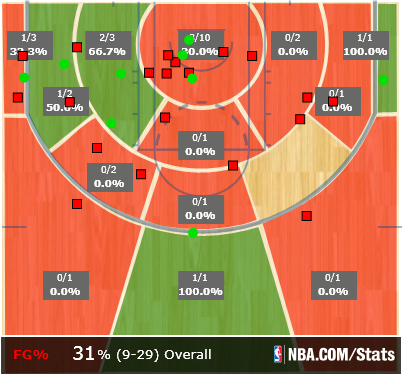 The Tulsa Shock's shot chart in the second half against the Seattle Storm.

The win keeps the Storm's playoff hopes alive as they sit two games behind the fourth place San Antonio Stars with two games left. Although the loss was a big blow to the Shock's playoff hopes, there's still a chance they can get that first playoff berth if they win their final two games while the Los Angeles Sparks lose their final three.

@NateP_SBN Tied 2-2 in head-to-head with LA, but would pass them on conference record if they win last 2, LA lose their last 3.

"For us, this has been the problem all year - we have to finish games," Diggins said. "We have to step up, but you have to credit them tonight. They were able to finish. They have a strong veteran core there that did their job. We just have to do a better job of finishing."