Okay, the San Antonio Stars rookie swingman didn't drain another game winner. But she did score 30 points on 12-of-20 shooting, and led them to a 80-64 rout of the New York Liberty.

The biggest quarter McBride has was the first, where she scored 15 points on 6-of-7 shooting, and on top of that, she also made all three of her three point attempts. Here's her shot chart: 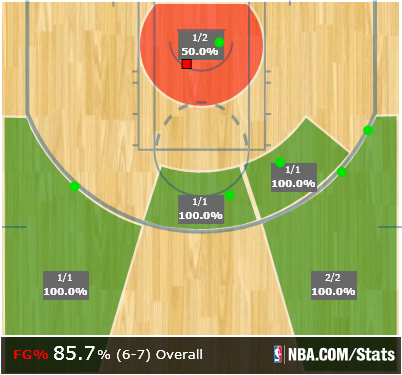 McBride was fifth in All-Star voting for all frontcourt players, and actually fell from being in fourth place during early returns. The Stars took their frustrations to Twitter after seeing her start her game out right.

In addition for San Antonio, Danielle Adams had a good night at the office where she added 16 points and made four threes of her own, and Danielle Robinson scored 13 points.

As a team, what helped lead the Stars to this victory was team assists and taking care of the ball. They made 22 assists on 31 made field goals, while only committing 10 turnovers. The Liberty did outrebound the Stars, 41-34, but they committed 16 turnovers which turned into 18 Stars points.

For New York, Cappie Pondexter actually had a good night statistically where she scored 17 points on 4-of-9 shooting, had four assists, and only one turnover.

And sophomore guard Sugar Rodgers led New York with 21 points and scored 17 points in a quarter on 6-of-10 shooting. That's more than the 15 points McBride scored in the first. Unfortunately, Rodgers made those 17 points in the fourth quarter, when the outcome of the game was all but decided.

With the win, San Antonio is now 11-9, and has a three game lead over the Los Angeles Sparks for the third seed in the Western Conference Playoff race. The Liberty's loss brings New York down to a 8-13 record and back into last place in the Eastern Conference.