The fourth quarter pretty much tells the entire story of an 83-72 Minnesota Lynx win over the L.A. Sparks, with Maya Moore leading the way with 16 of her game-high 30 points in the final period.

#sparks fans want to know why their team is 7-10? It's plays like that. A secondary break & Tan White WIDE OPEN for a layup.

All of the L.A. Sparks' problems - both strategic and structural - are magnified when facing a team that plays basketball as intelligently and together as the Minnesota Lynx.

And after going back and forth throughout the first three quarters, the Lynx came together for a dominant fourth quarter to beat a seemingly uninspired Sparks team, 83-72 (box score).

And really, those fourth quarter shot charts alone tell the story of the game and an increasingly frustrating Sparks season to watch. 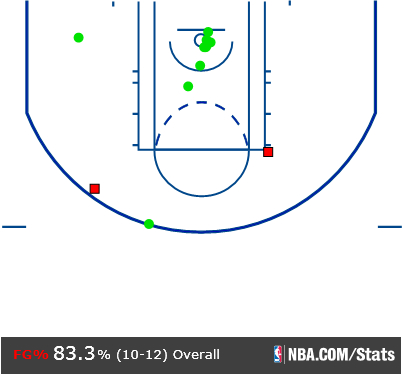 Fourth quarter shot chart for the Minnesota Lynx against the L.A. Sparks on 7/8/14.

The Lynx shot 10-for-12 (83.3%) to outscore the Sparks 27-13 in the fourth quarter. Minnesota did an excellent job of spreading the court, running the offense through center Janel McCarville and forward Devereaux Peters, and simply passing and cutting to get high percentage scoring opportunities in the paint - when they weren't hitting those shots, they were putting themselves in position to get to the free throw line (6-for-7 free throw shooting). Exacerbating problems for the Sparks was their heavy reliance on a larger lineup with three bigs and two guards: the Lynx just spread the court and found a way to force a big to stay in front of a wing on the perimeter.

The most lethal threat to the Sparks: Maya Moore.

Moore had a 16 of her game-high 30 points in the fourth quarter, including 5-for-5 free throw shooting and a dagger three to put the Lynx up by 11 with 46 seconds left. She was the beneficiary of that Lynx spacing as she often had a slower or smaller player attempting to guard her. In a sort of quirky role-reversal statistical outcome, forward Devereaux Peters showed her value to the team, recording 4 of her game-high 6 assists in the final period while point guard Lindsay Whalen had 4 of her team-high 9 rebounds in the fourth.

Despite some gaudy individual numbers for the Lynx, the numbers on top of the shot chart reflect a team that was playing extremely well as a unit. Meanwhile, the Sparks looked like a group of individuals that had faith in neither their system nor their teammates. 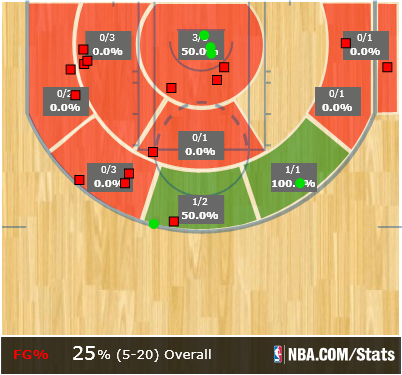 Fourth quarter shot chart for the L.A. Sparks against the Minnesota Lynx on 7/8/14.

For those wondering how a team that gets eight more shots than their opponent can get beat so badly, the Sparks' fourth quarter shot chart pretty much explains it: for all the Sparks' talent and the effectiveness of their bigger lineups in theory, they bailed the Lynx out by shooting 13 of their 20 fourth quarter shots outside of the paint. The one bright spot of the game for the Sparks was that their size gave them a serious rebounding advantage, which helped to create all of those extra shots.

The Sparks finished the game with a season-high 20 offensive rebounds, including 5 in the fourth quarter. But for all of those offensive rebounds, they only managed 20 second chance points and the fourth quarter shot chart helps to understand why - they got so perimeter oriented that those second chance scoring attempts still produced jumpers, which has hardly been a strength for the Sparks this season.

Center Jantel Lavender certainly helps matters with her ability to actually make jumpers: tonight, she scored a team-high 17 points on 7-for-13 shooting to go with 10 rebounds. The problem is when star Candace Parker falls in love with her jumper: she went 5-for-18 from the field to score 16 points, just two of which came in the fourth quarter when her team fell apart. Further driving home the problem: Nneka Ogwumike went without a shot in the first half despite finishing with 10 points and a game-high 14 rebounds.

It's really difficult to know what to say about the L.A. Sparks that hasn't been said multiple times for over a year now. They've now lost three of their last four games, all three losses being showcased nationally on ESPN2.

If you don't think things have reached a crisis point, there's still no sign that they're closer to answers.