Kayla McBride made her second game-winning shot of the year, and it's probably more amazing than her first. End result? A 71-70 San Antonio Stars (10-9) win over the Indiana Fever (8-10) Saturday at Bankers Life Fieldhouse.

The rookie swingman made a three with 1.8 seconds left, capping off a 17-3 run in the last 5:36 minutes of the game. She did it while being the player to inbounds the basketball starting with 6.8 seconds left. McBride passed it to Danielle Robinson, whose defender overcommitted to her as D-Rob drove to the left, and not very far. That ultimately opened McBride up for an open look, so D-Rob dished the ball to her... and SWISH!!!

Though the game-winner is her most notable basket, McBride had 14 points and 3 rebounds during the entire game, which led all Stars scorers. Indiana also committed six turnovers in that time, which turned into 10 of San Antonio's points. OUCH!

The last huge run in the fourth quarter was a really dominant and clutch stretch for the Stars, where they made 5-of-6 baskets. Danielle Robinson scored 4 points (one made shot and two free throws), and assisting on two more baskets. Danielle Adams was the leading scorer with five points in the run, and also blocked the ball twice in that stretch.

The Fever actually had a big run of its own before the Stars, which probably makes this win even more emphatic in many ways. In the fourth quarter, Indy made a 13-2 run to start the period which turned a close 54-52 to a comfortable 67-54 lead with 5:36 remaining in the game, setting up the Stars run we saw from that point on.

The Fever's last basket was a Briann January three point shot with 6.8 seconds left and gave the Fever a temporary 70-68 lead, because Danielle Robinson made the go-ahead free throws seconds before. So most of that 17-3 run was really a 14-0 run for the Stars. That's just how dominant this run was.

The Stars' stunning comeback spoiled the season debut of Fever forward Tamika Catchings. While Catchings did not have a great shooting night where she only had 6 points on 1-of-7 shooting, she still contributed 7 rebounds and 4 assists, two of them during the Fever's last run. Shavonte Zellous led all scorers with 16 points, but fouled out of the game with 2:16 left in the game. If she stayed, perhaps things may have been different. Click here for the box score.

Last, but not least, when it seemed like the Fever was going to have a solid victory, even though the Stars' run was starting to get under way, we saw this while Danielle Adams was attempting free throws:

Goodnight from Indiana? The game’s not done just yet… #wnba #summerhoops pic.twitter.com/sZRScXEC7e

At the same, time I was writing this: 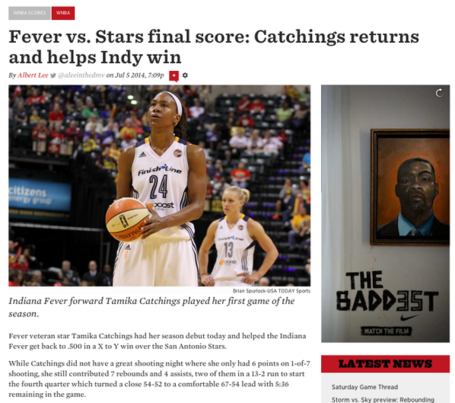 I guess I learned a lesson the hard way. :)