The Daily Swish: The Mercury, Lynx, and Mystics are winning and winning

While the WNBA wants to talk about Brittney Griner and Diana Taurasi of the Phoenix Mercury, the Washington Mystics have compelled us to think otherwise.

Share All sharing options for: The Daily Swish: The Mercury, Lynx, and Mystics are winning and winning

Happy Monday everyone. I'm writing this late at night because I finished something big for the team of the day: the Washington Mystics. Let's get to the scores.

The Los Angeles Sparks defeated the Seattle Storm, 77-69 on the road. The win gave Penny Toler her first win as head coach. And for the Storm, this is the first time that head coach Brian Agler has had a five-game losing streak. Fans have been talking about the Sparks and their troubles alright....

...but if there's a team that really needs sweeping change, it's the Seattle Storm. And it's time for us to stop beating around the bush with this subject. The Storm needs to terminate Brian Agler by the end of the season. And whoever replaces him needs to rebuild the roster from the top down. Agler is responsible for Seattle's current situation and hurting their future, such as signing veterans who were well past their prime, and trading younger players for veterans, like acquiring Crystal Langhorne on Draft Day in exchange for two consecutive first round picks. And all of this was done on a team that seriously needed a major youth movement to begin with over the last couple years.

Of course, one team out East and some of its fans are laughing at the Storm's expense as blackandgoldforever put it out, probably a bit too bluntly. The Storm did sweep this team in the regular season, but .... here's the meme below: 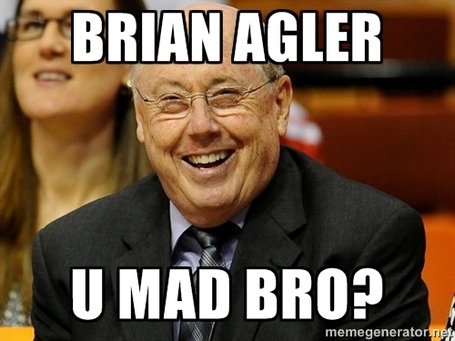 I'll have more on the Storm later, but it really is time to bring in someone else. If I was in the Storm's shoes, I would have done this awhile ago. Anyway, here's a recap by Jayda Evans of the Seattle Times.

The Indiana Fever defeated the San Antonio Stars, 75-68. Lynetta Kizer came up big, scoring 16 points in less than 15 minutes off the bench. In fact, Indy's reserves were huge in coming up with the victory. That win also helped them get back to second place in the East with the Washington Mystics, at the time. For San Antonio Becky Hammon and Danielle Robinson combined for 33 points. Here's a recap from StarsHoops.net.

The Phoenix Mercury's win streak is now 15, after beating the New York Liberty, 78-63. Brittney Griner had 18 points, and six blocked shots, while Diana Taurasi had a double double with 15 points and 10 assists. As a team, Phoenix had 12 blocked shots for the game, while New York had just one. Here's a recap from WNBA.com.

The Minnesota Lynx won their seventh straight game, defeating the Connecticut Sun, 76-65. Maya Moore had 17 points and 4 assists in the win, while Kelsey Bone almost had a double double with 15 points and 9 rebounds. This game was ultimately won in the field goal percentage battles, as Minny made 48.4% of their shots, while the Sun only made 32.9% of theirs. Queenie has a recap and notes for you here.

The team of the day defeated the Atlanta Dream to reclaim sole possession of second place in the Eastern Conference, 77-67. Our recap is here, and SB Nation's Peachtree Hoops has another here. In short, the Mystics won four straight, while the Dream lost four straight.

The Tulsa Shock beat the Chicago Sky, 79-69. Odyssey Sims scored 24 points, grabbed 6 rebounds, and dished 8 more assists, while Skylar Diggins added 18 more points. Sunday was Glory Johnson's birthday, and she scored 15 points and 11 rebounds to celebrate it. 14 of those 15 points were in the second half. Jessica Breland had the best performance for the Sky with 12 points 9 rebounds, and 4 blocks. The Tulsa World has more for you here.

Washington Mystics guard Ivory Latta had a recent breast cancer scare and talked about it publicly over the weekend. Here are several links on the story:

How did the Mystics start playing good basketball this month? Didn't Swish Appeal peg them in last place? Yes we did, but the way things are going, looks like we're going to eat more crow. Click here to read about some statistical trends that we have seen in their last eight games, when they started to turn things around.

Marc Allard of The Norwich Bulletin has a nice piece on Lynx forward Maya Moore. He states that Moore is now the face of the WNBA. Click here to read.

Indiana Fever head coach Lin Dunn is retiring after the 2014 season, and she is savoring her farewell tour in the WNBA. Here's a nice column by the Daily Herald's Patricia Babcock McGraw for more.

The Newsday based in Long Island has a column on Liberty forward Swin Cash, and what she is providing the team. Click here to read it.

Chicago Sky forward Elena Delle Donne hopes to return to the court later this week, according to her team. Here's a piece from The News Journal for more info.

Leah Johnson and Miah Register were a lesbian couple on the University of Richmond women's basketball team from 2011-12. Both ultimately left to Farleigh Dickinson because they alleged that there was homophobia within the Spiders' program. Now, they are engaged and have created an alliance dedicated to eliminate societal boundaries. Click here to read more from SB Nation LGBT sports blog Outsports.

Recently, ESPN First Take's Stephen A. Smith made some controversial comments in regards to gay athletes, most notably St. Louis Rams defensive end Michael Sam, and also about domestic violence and Baltimore Ravens running back Ray Rice. SB Nation's national team took issue with them and you can read about it here and here.

Staying on the topic of Stephen A. Smith, Cindy Boren of The Washington Post has another take. Click here to read it.

These aren't the only relevant links out there from the weekend. Have more? Share them in the comments below.

UPDATE at 11 p.m. ET - Forgot to put up an open thread. There is a game right now between the Fever and Sparks. Game is on NBA TV nationally, and TWC SportsNet in the LA area. So, use the comments here for that.