Stars vs. Shock video: How did Danielle Robinson get her game winning shot?

Share All sharing options for: Stars vs. Shock video: How did Danielle Robinson get her game winning shot?

We were going to call it a night, but we had big performances by several players in the league.

Today is a day where three players scored career highs: Minnesota Lynx forward Maya Moore, and the WNBA's "House of Guards" backcourt of Skylar Diggins and Odyssey Sims of the Tulsa Shock. The latter two scored a combined 73 points, but their team lost to the San Antonio Stars, 95-93.

How did this happen? With 3.5 seconds left, Stars guard Danielle Robinson found an open look to the basket for a layup. The whole video is embedded above.

Let's first start with D-Rob walking down the court. Now you're seeing this: 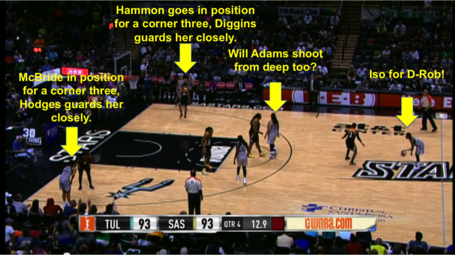 As Nate mentioned Monday, the Stars have had the highest three point percentage in the WNBA, as they make 38.3% of their shots. Let me also add that they made more three point shots, with 156 shots made out of 407 attempts before heading into Tuesday's contest. Furthermore, five players (Kayla McBride, Becky Hammon, Danielle Adams, Jia Perkins, AND Shameka Christon have made at least 21 threes each) in that time frame.

With Hammon, McBride, and Adams on the floor, that's going to stretch a defense big time. Notice that Sophia Young-Malcolm's on the floor too and moving back, but isn't guarded as tightly. Since she hasn't made a three point shot yet this season, or is even a serious threat from deep, not a surprise that Glory Johnson, the defender on her, stays closer to the lane.

Notice that because Adams is a threat from deep, Courtney Paris has to be away from the basket to account for it. But now, this matchup sets up the shenanigans that was D-Rob's game-winner: 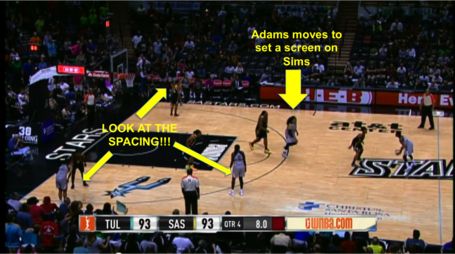 Adams moves to set a screen on Odyssey Sims. Hammon and McBride stay at the corners for a possible three point shot. Young-Malcolm is now behind the three point line too and that spreads the defense out a lot. Johnson is wise to not fall for the bait, but at the same time, she hasn't moved in Paris' direction either...

Let's see what happens once Adams sets the screen. 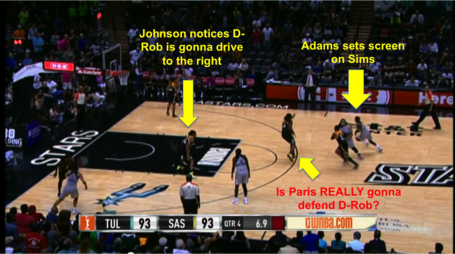 D-Rob drives to the right, noticing that Paris is on the perimeter. Johnson now realizes what's about to happen too... Since there are three defenders to the left of Robinson as she is driving to the hoop, there isn't much of an option to pass to McBride or Malcolm-Young without a good risk of a turnover. But to her right is a tightly guarded Becky Hammon.

At this point, the Shock defense has eliminated all three point threats and said, "Okay, D-Rob, if you beat us, you will drive to the hoop. McBride ain't droppin' a THIRD game-winner for 2014!" (McBride already scored 26 points for the night as well.) 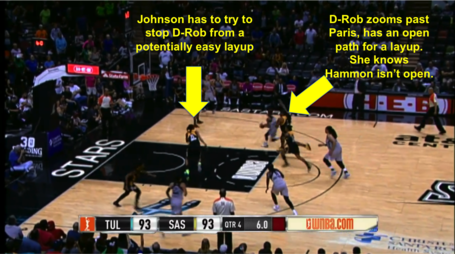 Since that's the only option left for San Antonio at this point, Robinson drives to the hoop, attempts a shot, and Johnson hopes to make a last second block. 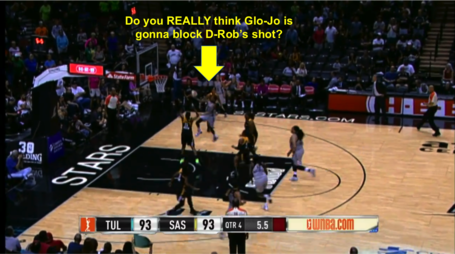 If you're a Shock fan, you hope so. But from hindsight.... 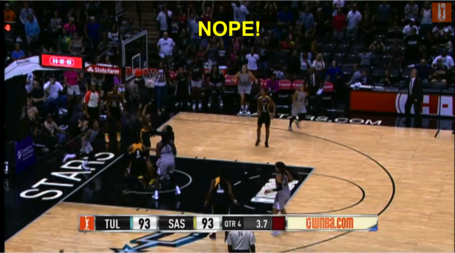 This play isn't from some complex set. However, it visually confirms how much of a threat the Stars are from the three point line. And of course, it shows just how damn good Danielle Robinson is.

If you want to watch the career-high performances for the Shock players, click here and here.