Mystics vs. Fever final score: Thibault talks about style of play after 80-77 loss to Indiana

The second half of this game showed us the kind of basketball the Mystics should be playing on the offensive end of the floor. But the first half and the second quarter? Ugh.

Share All sharing options for: Mystics vs. Fever final score: Thibault talks about style of play after 80-77 loss to Indiana

The Indiana Fever (8-9) defeated the Washington Mystics (7-11) on the road at Verizon Center, 80-77, which helped them get solid footing on the fourth seed in the Eastern Conference.

The run that effectively decided this game was during the entire second quarter where the Fever outscored Washington, 31-14. During that time, Lynetta Kizer led the way with 10 points in the period on 5-of-6 shooting, and Natasha Howard also added six more points. Howard ultimately led all scorers with 20 points for the night.

The Fever shot 14-of-17 in the quarter, and their shot chart resembled a video game with the settings and sliders set to the easiest mode possible. 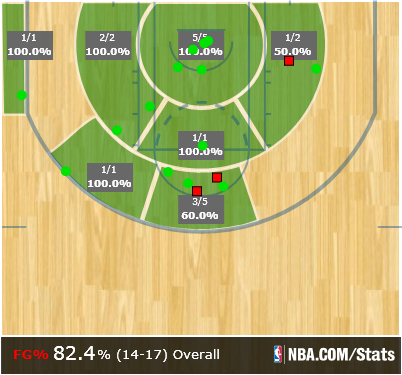 During that run Howard and Kizer also had great nights shooting from midrange, and the Fever hasn't been too great at that this season.

I think the women’s game in general, the WNBA needs to be a more free flowing game. -Washington Mystics head coach Mike Thibault

In the second half, the Mystics finally started playing more uptempo and the way that Mike Thibault would like them to play. They ultimately outscored the Fever, 48-38 and forced the Fever to commit 11 turnovers. All the starters were scoring at a rather even rate as well. But it wasn't enough to pull off the W because of the horrible second quarter, and the ho hum first, even with the Mystics racing out to a 8-0 lead.

If you want to read the box score to find out more on how many points or rebounds someone had, click here to get to it.

The biggest takeaway I got from this game came from Coach T, who was frustrated with the team's slow pace of play this season so far. He also tied that into a larger theme. Most notably that the WNBA game and women's basketball needs to be more uptempo and free flowing like NBA offenses tend to be. Here's his opening quote in his press conference embedded above, or click here for the link from Monumental Network:

When I changed this team, when I came here, and we went with younger players, and we tried to make changes, there’s a way I want to play, a tempo I want to play at, and they haven’t grasped that. I’ve kind of let them bail out by calling plays for them, and trying to help them. And they need to learn how to play basketball.

I think the women’s game in general, the WNBA needs to be a more free flowing game. I don’t want to be a walk-it-up team. I don’t want to play that way. And so, there’s gonna be some tugging right now to get that done.

I don’t want to go into halftime two out of the last three games going crazy about stuff. But the message was delivered at halftime that we’re going to do it this way. Quit fighting it. So we played a good second half.

That wasn't his only quote in regards to how the WNBA game can improve. Toward the end of the video, he was asked a question on missed layups. The Mystics definitely missed some easy bunnies in this game:

Well said Coach T. And someone send a link to that presser to Dave Miller at TWC SportsNet. I can definitely see him say "Amen" after Thibault's points on where the WNBA can improve its style of play.