The Washington Mystics squandered a 15-point second half lead, but held on to beat the L.A. Sparks 79-75 at Staples Center.

I watched tonight's game between the L.A. Sparks and Washington Mystics specifically because I figured that Mike Thibault and his staff are good enough at figuring out how to exploit an opponents' weaknesses that they'd find a way to keep it competitive - maybe even pulling off a road upset.

Sure the Sparks have a number of advantages over the Mystics, including the star power issue that Albert has harped on multiple times. And yes the Sparks were playing for the chance to move into third place.

I could sit here and re-hash all the many problems that continue to plague the Sparks this season, but simply reflecting on Time Warner analyst Dave Miller's points at halftime really tells the story of this game.

With things tied at 34 at halftime, Miller made the following three points:

During the second half, the following occurred:

It's not like figuring out what's going wrong for the Sparks is rocket science, but every loss seems to be the byproduct of a combination of problems.

Chief among them are defense, where the Sparks allow the fourth-highest opponent field goal percentage in the league.

On the bright side, the Sparks did cut a 15-point third quarter Mystics lead to 0 in the fourth quarter in part because of Candice Wiggins harassing defense on Ivory Latta, who had 15 points including 7-for-7 free throw shooting to go with a team-high 5 assists - with Latta struggling to find daylight, the Mystics started rushing things a bit and the lead dissipated.  But that was negated by the Sparks' complete inability to guard Tierra Ruffin-Pratt, who had 11 of her team-high 18 points in the third quarter as she made the Sparks pay for putting bigger players on her.

Just to top it all off, Ruffin-Pratt made all five of her shots in the quarter as well. Here's the shot chart: 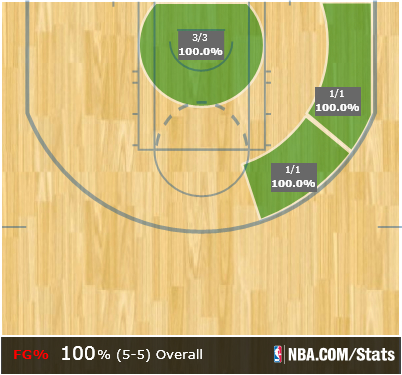 And, if you've been following us throughout the year, there's just not much more to say about the Sparks right now.

In a game that they had every reason to want to win before the All-Star break, they were never able to bring their considerable individual talents together into a coherent team concept.

For more commentary on this game from others, check out our game thread.