Here's a more detailed breakdown on how Phoenix Mercury center Brittney Griner made her fourth career WNBA dunk, this time on the Washington Mystics.

The Phoenix Mercury displayed excellent ball movement, taking advantage of the Washington Mystics' defense early in the 4th quarter of their game on Tuesday night, culminating in a Brittney Griner slam dunk. A video of the play is embedded above.

Before the video, Diana Taurasi walked the ball up the court and eventually passed the ball to Candice Dupree. Right when Taurasi made that first pass, Mystics guard Bria Hartley still had eyes on her: 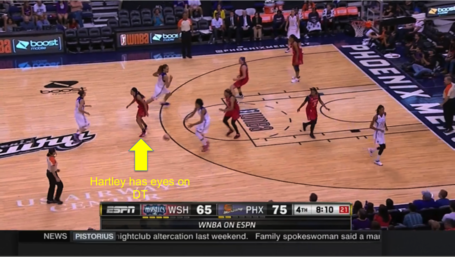 Now after the two made some contact, Taurasi moves behind the three point line. But Hartley now moves her eye from Taurasi and moves toward the ball. This allows Taurasi to get wide open: 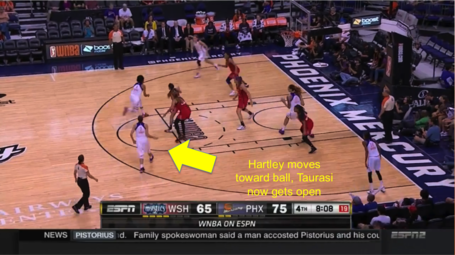 In addition, to Taurasi, DeWanna Bonner is wide open on the right corner as well. Why both of them are open like this is beyond me. This sets the stage up for the time the YouTube video above started.

Now Mercury forward Candice Dupree drives to the left, and then passes the ball to Penny Taylor. Right after Dupree passed the ball to Taylor, she set a screen on Monique Currie, who moved through it, but it did slow her down toward getting to Taylor. 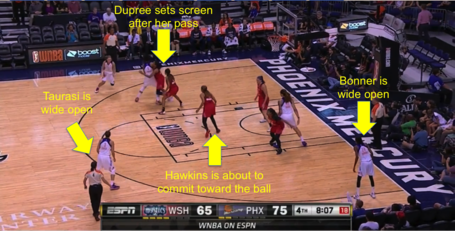 Now there's another player here who also had a chance to notice Taurasi getting open, but didn't, namely Tianna Hawkins. She continued to defend with her eyes on the ball, which was something that Taylor noticed and took advantage of here. That's basically a concession to allow DT to do whatever she wants.

So, first it was Hartley who took her eyes off DT. Now, it's Hawkins who does the same. If Hawkins had her eyes on AND moved toward Taurasi instead, sure, it's a mismatch one-on-one, but I'll bet that we won't see the whole sequence of events that happens after this because this is when the play develops.

Taylor notices really quickly that Hawkins has overcommitted to the left side. So she passes to a wide open Taurasi who's on the right center side of the court. Mystics forward Tierra Ruffin-Pratt was double-teaming Griner with center Stefanie Dolson. Ruffin-Pratt's had her eyes on DT for much of this time at least. So when she see Taylor's pass, she's now thinking, "OH MY GOD! DT IS GONNA SHOOT!" 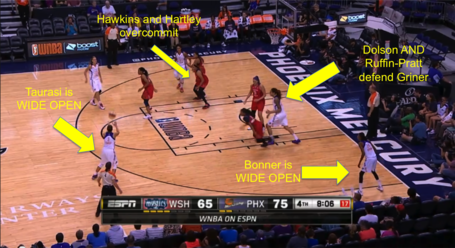 As Taurasi catches the ball, Ruffin-Pratt commits to defending the shot. So now let's see what DT does when TRP picks her poison with one of the best point guards in the WNBA: 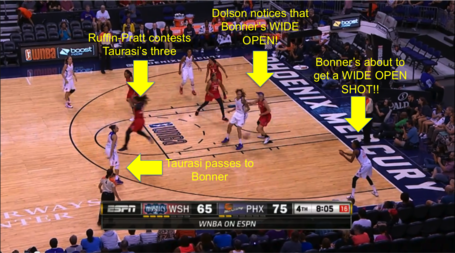 Taurasi passes to a WIDE OPEN Bonner. TRP now looks silly for committing toward a shot that never happens.

As DT passes the ball, now Dolson is thinking, "What the hell!? I gotta defend this shot!!!!" In the screenshot above, she makes the decision to let go of her defensive assignment on Griner, and runs to contest the shot that Bonner is going to take! Hawkins at this point now has her eyes on the ball and sees that Dolson is going to contest and now defends Griner. That is the good thing, but: 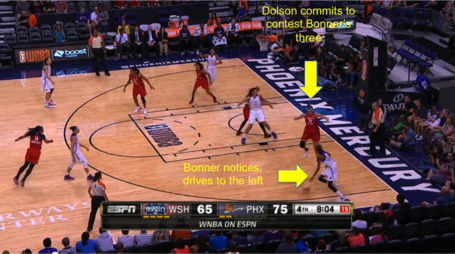 Bonner's got a trick up her sleeve too. She drives to the left where she has a TON of space to operate which makes Dolson look silly. That's two times where the Merc tricked the Mystics into thinking that they're going to make a wide open three.

At this point, Bonner has the chance to take a potentially wide open midrange pull up shot. But instead, she continues to go toward the hoop. At the same time, here's Hawkins thinking, "Bonner's gonna take the shot!" So now she picks her poison with Bonner: 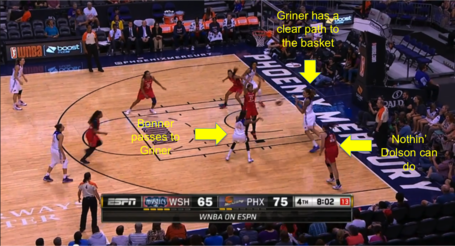 Instead of taking a shot, Bonner sees that Griner is open to the hoop and passes it to her, while Hawkins jumps up in the air to defend a shot. So the Mystics now took the bait THREE TIMES when it looked like the Mercury could take a shot.

What does Griner do? 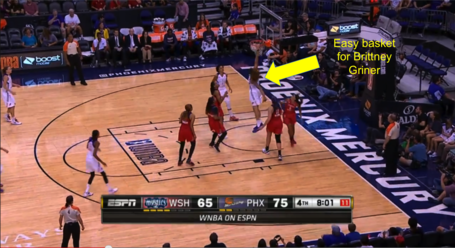 Yup. Not hard for her to dunk it given how open she was at this point. All the Mystics could do is watch in awe, though Hartley made a very vain attempt to try do something as Griner gathered her momentum.

ESPN is certainly going to call it a Top 10 Highlight for SportsCenter and make it look like Griner did this all by herself. But the dunk is really the end result of the Phoenix Mercury's excellent ball movement and execution that took advantage of the Washington Mystics' defensive mistakes.

To read the recap of this game, click here.