2014 WNBA All-Star Starting lineup review: Did the fans get it right?

The 2014 All-Star starting lineup has been announced and save injury replacements, know who will be taking the floor first. Did the fans get it correct? (Yes that's a real question.) Here's my take.

Share All sharing options for: 2014 WNBA All-Star Starting lineup review: Did the fans get it right?

So this is what we know: Fans continue to vote for their players and since they are the ones who fill the seats, I don't see this changing anytime soon.

Personally? I'm all for rewarding the players that have earned their spots. Some people vote for their faves, some vote based on a team's winning percentage, I just wanted the best group of players at the halfway point to be rewarded with the ability to let off some steam and enjoy playing basketball in its purest fashion: pickup with little to no defense until the game is on the line.

The lineup for the West is spot on. Don't believe me? 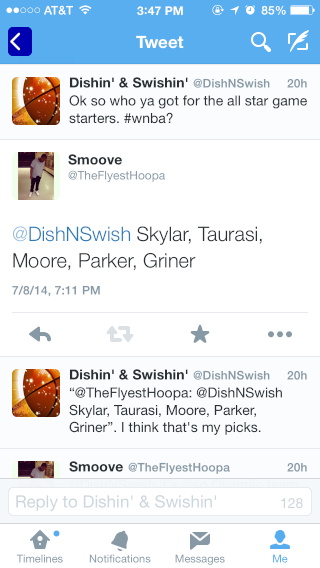 These have been the best five players in the Western Conference so far in the season. Seimone Augustus seemed to be in the equation along with backcourt mate Lindsay Whalen from early returns but Diggins fan base and overall improvement this season allowed her to comfortably slide into the starting five. From a guard's perspective, Augustus has missed 5 of her team's 20 games this season, which effectively removes her from the starting lineup due to there being contenders behind her that haven't missed a tip.

The frontcourt was a given. You've got the reigning MVP, the reigning Finals MVP and last year's number one overall pick and league leader in dunks and blocks. Who wouldn't want to see these three play together? Other than Australia and France in a few years, of course.

It just couldn't be more difficult to choose 11 players from the Eastern Conference period, much less decide who should start. Between health issues, team struggles and players just not playing well, every person's preference is bound to have some slight difference.

McCoughtry was the only easy choice as she's in a league of her own in the East.  In reality, Delle Donne's performance makes her an All-Star starter easily so I'm fine with her selection. Tamika Catchings just returned to play her first games of the season and while she looks good, if we're actually rewarding players for their play this season, she's nowhere in the mix.

The first names that came to mind were Jessica Breland, Tina Charles, Erika de Souza and Erlana Larkins. Charles is eliminated almost immediately because I realized I was writing the article and she's a post player shooting 48% from the field. Larkins has solid numbers but they're just not strong enough to beat out the other two. Breland has been amazing for the Sky but two things came into play: de Souza has had the stronger games in their head-to-heads AND de Souza's previous two all star appearances were in '09 and last season. Her number in those two seasons:

Pondexter would probably make my starting lineup in an apple-bobbing contest for the second backcourt spot but it wasn't obvious and the voters agree as she beat out Ivory Latta by just 172 votes.

Schimmel shouldn't be in the starting lineup at all. She just hasn't consistently gotten the minutes and has only started two games for her Dream team in Atlanta. She certainly looked it to start the season, but she's probably the biggest shock of the starting ten. I'd replace her with Shavonte Zellous who's been very solid for the Indiana Fever.