The Mystics have been a bad team offensively. And today, that showed. When superstars get going early against teams without them, it generally is just too much. That's what happened Sunday as the Liberty blew out the Mystics at the Garden, 81 to 64.

The key statistic in this game was the number of assists that the Liberty had in the first half. They had 17 dimes on 23 made field goals. The assists were pretty evenly distributed too, as five players had at least three assists each, led by Anna Cruz who had five in the half, and the game.

The Mystics on the other time had three assists on ten made field goals. That helped blow the game wide open in the second quarter. But even before the second quarter, the Liberty threatened to make this game a snoozer early so don't let the 22-17 score in that period fool you.

Cappie Pondexter scored 15 points in the first half on 7-of-8 shooting, almost all of them in-rhythm jump shots. When an offense is flowing on all cylinders and a team has 17 assists in the first half, the shot chart should look pretty nice. For New York, that was the case. Here's how they did in the half: 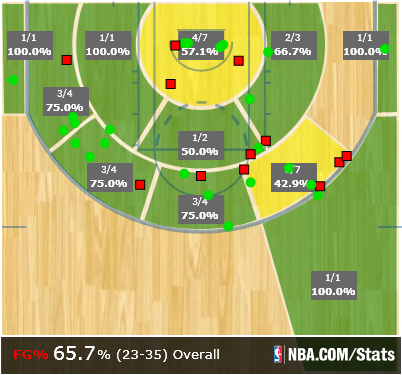 The Mystics' woes went beyond the lack of effective ball movement. They once again could not convert at the rim at an acceptable rate. If Kara Lawson didn't have a good day at the office (she had 17 points and some early threes to keep the game close in the first quarter), things would have been much worse.

In the second half, the damage was done and the Liberty's offense cooled off. Except that Pondexter made all three of her shots in the third quarter and didn't play in the fourth. So she had 21 points for the game on 10-of-11 shooting. A great game for her.

The Liberty headed into this game dead last in the Eastern Conference. However, if their ball movement continues to be like the way it was today, this team shouldn't have a problem getting back to playoff contention before too long.

As for the Mystics, let's face it. They are going to lose some games because they're outmanned, so I get it. But they need to start making shots or this team could be really hard to watch. Their next three games are at home against Phoenix, Chicago, and Atlanta, in that order, so... yeah. They better get their offense together. Quick.

Queenie will have more notes on this game soon.