Alex Bentley scored a career-high 21 points while forwards Kelsey Griffin and Alyssa Thomas stepped up with Chiney Ogwumike in foul trouble to guide the struggling Connecticut Sun to their third win of the season with an 88-71 win over the Indiana Fever.

UNCASVILLE, Conn. – There were almost as many fouls called (53) as there were field goals made (56) in Saturday's game between the Connecticut Sun and the Indiana Fever, but that was not enough to take Alex Bentley out of her rhythm.

The second-year guard out of Penn State was clicking Saturday night, scoring a career-high 21 points on 9-of-13 shooting as the Connecticut Sun put together arguably the best 40 minutes of basketball they have played all year in a 88-71 win over the Indiana Fever. 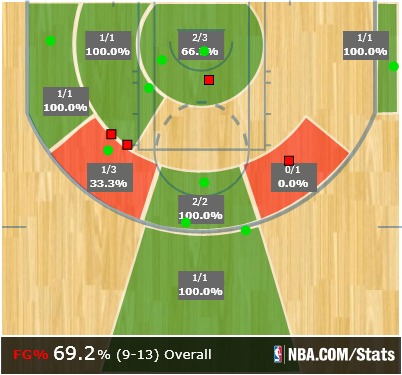 Bentley's previous career high was 19 while playing for the Atlanta Dream last season. She had a 12-point game earlier this year, but came in averaging 6.9 points per game.

Connecticut struggled out of the gate, turning the ball over four times and allowing Marissa Coleman to connect on a 3-pointer before Bentley finally got the Sun on the board with 7:23 to play in the first quarter.

Things could have gotten ugly for Connecticut 11 seconds later, as Chiney Ogwumike went to the bench with her second personal foul. The rookie out of Stanford, Connecticut's most consistent player all season, sat out the next 13 minutes, but Bentley kept momentum on the Sun's side, scoring six of the next 10 points in the game to give Connecticut a 10-7 lead.

"She played great," Connecticut coach Anne Donovan said. "Not just her offense, obviously, but defending (Indiana guard Briann) January is pretty important when you're playing Indiana, and she did a great job."

Bentley made January's night a living nightmare, never allowing the Fever's leading scorer an inch. January finished with four points on 1 of 7 shooting while turning the ball over five times.

With Indiana putting the heat on Connecticut late in the third quarter, cutting what was a 10-point halftime deficit to six with 4:20 to play, Bentley stepped for the Sun, hitting a 3-pointer out of a timeout. She then got on the end of a Kelsey Griffin steal on the Fever's ensuing possession and finished at the other end to put the Sun up 11.

I'm happy for her. She continues to get better each and every night, and we need her to.-Connecticut Sun forward Katie Douglas on Alex Bentley's performance

"I'm happy for her," said Sun forward Katie Douglas, who finished with 15 points against her former team. "She continues to get better each and every night, and we need her to. We need her to be that consummate point guard for us. Some nights she's going to be attacking and some nights it could be distributing, but it's just a great team win and just a much-needed team win."

As important as Bentley's performance was, the play of Griffin and Alyssa Thomas was as crucial to the Sun's dominating performance. With Ogwumike only playing 18 minutes due to foul trouble, the two forwards stepped up off the bench. Thomas did the scoring, contributing 11 points, but Griffin did the dirty work yet again.

The fifth-year forward out of Nebraska has made a living in Connecticut as the Sun's grinder down low, bailing the team out of difficult situations with plays that go overlooked by many, but not by Donovan, who again sang Griffin's praises Saturday night after a performance that included seven rebounds and six steals, calling her a "blue-collar" player and an "overachiever."

"It was really important," Donovan said of the forwards stepping up with Ogwumike out. "Last game we talked about the first half and how we started the game kind of lackluster against Washington, so we kind of talked through that. We weren't going to have that happen again. And then we lose Chiney, so it's really interesting to see how we responded.

"And Kelsey Griffin...she comes in as an undersized post that people think they can take advantage of, and she just, with her hustle, made up for Chiney's absence very quickly. Give (Indiana forward Lynetta) Kizer credit. I thought she came in and did a nice job for them off their bench, but I really like our post rotation right now. Tonight was a great testament to that when Chiney is not playing well, other people can fill in."