The Indiana Fever (4-3) defeated the Washington Mystics (4-3), 64-61. The Fever was able to pull off a win thanks to a big third quarter run where Erlana Larkins scored 10 points in the period, and 13 points overall for the game.

If you look at the box score overall, the Mystics held the Fever to 35% shooting overall, and 64 points. They out rebounded the Fever too, 41-29. That generally means that the Mystics will win the game if their offense is at least okay. But they lost, since they only scored 61 points.

Here is their shot chart overall for the game: 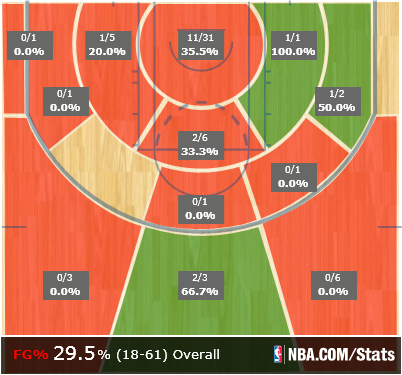 What makes this even more frustrating is that the majority of their shots were taken at the rim, and they failed to convert them. 11 made shots out of 31 at the zone closest to the rim? That's bad.

But the worst part about this game was the third quarter. That is what basically decided this game, where the Fever began to take a lead, and never let go from then on. During that quarter, Erlana Larkins scored 10 points, 8 of them at the rim. In fact all of her made baskets were there. And even though the Fever shot 35% for the game, they made 56.3% of their shots in the third quarter. Here's Indy's shot chart, just for the third quarter: 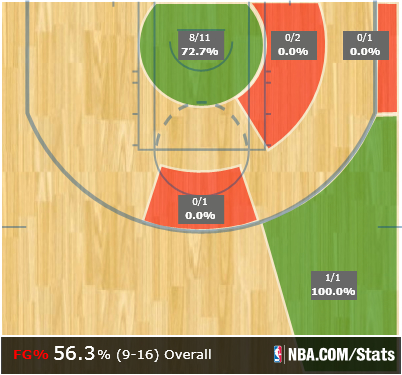 And here's Washington's shot chart, also just for the third quarter. I'll let the picture tell you their field goal percentage because it was pathetic. 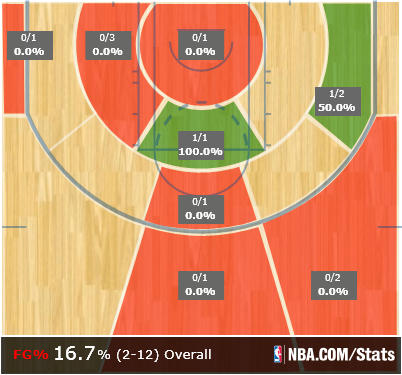 In addition during the third quarter, the Mystics committed seven turnovers while the Fever only committed two. That pretty much sums up how they lost.

Mike Thibault didn't have the benefit of seeing these shot charts in real time during his press conference. But he talked a lot about the Mystics' offensive ineptitude for this game, and this season as a whole...  (Click here if you cannot see the embed):

To the Mystics' credit, they made a late run to get them in position to win the game. Bria Hartley made some late buckets, including a crossover on Fever guard Maggie Lucas to make the score 61-58 with 17.7 seconds remaining. Here's a link to the video recap from WNBA.com, so you can see the play there at the 1:43 mark.

Here are some other things of note. First, Marissa Coleman led all scorers with 20 points, and she made all eight of her free throws. Coleman wasn't part of that big third quarter run, but without her, the Fever may have lost this game.

Then, the Mystics stormed to a big first quarter lead. In fact, they were leading by as many as 16 points in the second quarter. However, as Coach T mentioned in his presser above, he called early leads "fool's gold."

The Mystics were leading 18-7 at the end of the first quarter by shooting only 25% (5-of-20) from the field. To be fair, they also made all eight of their free throws, but still, leading by double digits after only shooting 25% isn't going to make a coach feel confident about a win.

So, what's my takeaway from this? For the Fever, this is a big win and now they're on a four game winning streak. For the Mystics, it is great to see that they are defending teams very well. But they are going to have to be more careful with the basketball and make their shots at a higher rate all around if they're going to win games consistently.