Crystal Langhorne was a model of low post efficiency for the Seattle Storm tonight, but the Phoenix Mercury just had more weapons and more efficiency to help them get a win.

After a competitive first quarter, the Phoenix Mercury used 57.9% shooting in the second quarter to separate themselves en route to a comfortable 87-72 win at home over the Seattle Storm.

The Seattle Storm deserve credit for fighting to keep this game close - it didn't really get out of hand mathematically until the final few minutes - but ultimately the Phoenix Mercury were just too balanced and too big inside as they improved to 4-1 on the season.

Brittney Griner looked unstoppable in the second quarter, scoring 8 of her 19 points and showing increasing confidence and poise in her second year. With Candice Dupree matching Griner with a season-high 19 points of her own - 6 in the second quarter - the Mercury seemed able to get whatever they wanted shot they wanted in the paint. The two posts also had four assists apiece, reflecting an increasingly fluid offense with multiple players able to create scoring opportunities for others.

"They were scoring also so we weren't really making stops," Storm wing Shekinna Stricklen said of the Mercury's second quarter run. "I got in and tried to do whatever I could do. Their transition was tough because we weren't communicating and that led to some easy shots."

From the perimeter, Diana Taurasi added a team-high 20 points and a game-high 7 assists of her own including a circus shot to end the half.that put the Mercury up 9. All told, the Mercury shot 53.2% from the field for the game to badly outshoot the Storm, who shot just 41.3%.

Despite falling to 2-6, the Storm continued to show signs that their record is more a reflection of their strength of schedule - they've now played two road games against the Mercury and have the Minnesota Lynx up next - than how often they'll win in the long-term. And there were plenty of bright spots that suggest room for improvement beginning with Crystal Langhorne. 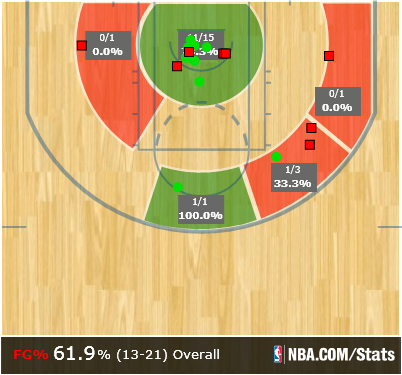 After a shaky start to the season, Crystal Langhorne has found a groove in the low post right. Langhorne entered the game on a tear, shooting 21-for-24 from within five feet of the basket over the last three games. Tonight, she added 11-for-14 shooting around the basket to score a season-high 27 points along with a game-high tying 8 rebounds.

After looking a bit flummoxed by Griner the first time around, tonight she was far more decisive and used her combination of agility and beautiful footwork to work her way under and around Griner. Adding to the performance: she only got blocked by the 6-foot-8 Griner once. It was her six points in the first quarter while going right at Griner that set the tone and helped the Storm get out to a 20-18 lead after one period.

Unfortunately, her Storm teammates just didn't give her much help tonight: taking away Langhorne's performance, the rest of the Storm shot just 30.95%. Shekinna Stricklen did score 13 points on the strength of 3-for-6 three point shooting and Tanisha Wright continued to be effective as a distributor with 7 assists and just 2 turnovers, offering some vision of how good they could be once Sue Bird starts hitting shots.

But the Mercury's defense should be credited with successfully holding Langhorne's teammates in check for most of the night.

"We have certain schemes in place to take them off their strengths, basically," Mercury coach Sandy Brondello said, according to a Mercury release. "Knowing individual tendencies is a real big thing for me and to take them away from their strengths... We're OK if one player can score 27 and then we can limit everyone else."

Yet ultimately, the Mercury's balance offensively - inside and out - was just that much more impressive, overshadowing an All-Star caliber night from Langhorne.

"We got off to a good start but couldn’t sustain it," Storm coach Brian Agler said, according to a Mercury release. "Again I take nothing away from Phoenix they have a great team, they are very, very good. From the offensive standpoint they might have the most depth out of anybody in the league."

For more on the Storm's season, check out our brief overview of their first seven games from earlier today.