With both starting shooting guards out, the Lynx and Storm both struggled to create shots at times. But costly mistakes down the stretch undermined the Seattle Storm's comeback attempt in a 74-69 loss to the Minnesota Lynx.

The Minnesota Lynx really only played to the dominant standard we've come to expect of them for one quarter against the Seattle Storm today.

But a strong second quarter at home was enough to help them hang on and beat the visiting Storm 74-69 today.

The Lynx shot 57.9% and had assists on 10 of their 11 field goals while outscoring the Storm 23-15 in the second quarter after an up and down fourth quarter. In addition to moving the ball well and holding everyone outside of Seattle star Sue Bird to 3-for-9 shooting in the second period, the Lynx dominated the paint: while they had a 12-2 scoring advantage in the paint, they didn't allow the Storm even one offensive rebound.

And with both teams' starting shooting guards out of this one, it was post play that ultimately became the story of this game.

During a mostly dismal second half, Lynx center Janel McCarville started to show off her shooting touch a bit as she scored 10 of her game-high 22 points mostly on jumpers. 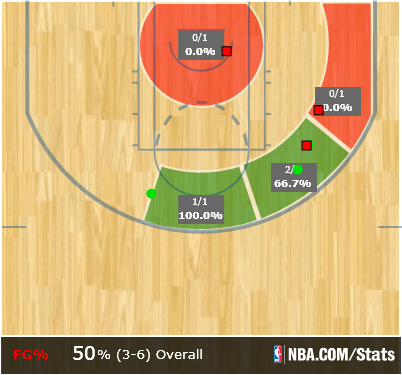 Janel McCarville's second half shot chart against the Seattle Storm.

While McCarville led the Lynx in scoring, MVP candidate Maya Moore crept toward a triple-double with 14 points as well as team-highs of 8 rebounds and 7 assists despite a 4-for-12 shooting night. Devereaux Peters added 12 points, 7 rebounds and a game-high 4 steals to the winning effort.

Crystal Langhorne had a team-high 8 rebounds for the Storm, but was largely missing in action offensively with just 6 points on just 2-for-6 shooting as the Lynx frontcourt made it difficult for her to even get touches. When McCarville wasn't guarding her one on one, the Lynx swarmed her in the paint, and did a good job of rotating to stop her from scoring out of pick and rolls.

Yet the Seattle managed to not only hang around, but also take the lead with 3:26 left in the fourth quarter after recovering from Minnesota's hot second quarter.

Defensively, the Storm did a decent job containing the Lynx offense for the most part in the second half, holding them to 30.8% shooting from the field and forcing them to shoot 16 of their 26 shots outside of the paint. But the Lynx made it up at the free throw line, making 16 of 18 attempts in the second half of a game that was tied with 3 minutes left.

With their defense containing the Lynx, the aforementioned Bird was in position to help save the day for the Storm once again. However, after recording a team-high 21 points and 7 assists as it appears that her patented jumper is returning to form after a poor start to the 2014 season, miscues in the final moments of the game killed the Storm.

The Storm had two opportunities to take the lead again in the final two minutes but a Jenna O'Hea turnover on a pass to post Angel Robinson and a missed wide open layup by Robinson allowed the Lynx to hang on for the win. Down three with 12 seconds left, Bird turned the ball over on an out of bounds set on what appeared to be a miscommunication.

The Lynx win comes after a loss in Seattle on Friday and is the third in four games, all three at home. There's still plenty to figure out in Minnesota, but it's not unreasonable to repeat the same caveat: they're still within half a game of first place in the Western Conference and have yet to play a game this season at full strength with star power forward Rebekkah Brunson still out.