An early barrage of three pointers by the San Antonio Stars (8-8) set the tone of this game. They beat the Washington Mystics (7-10), 73-65 at Verizon Center.

Washington Mystics General Manager and Head Coach Mike Thibault is known by the Swish Appeal community as a straight shooter, which we appreciate. A lot. For that reason, he's probably the WNBA coach that we like seeing the most in a post game conference, win or lose.

In his postgame presser (embedded above or click here for the link) after the Mystics' 73-65 loss at home to the San Antonio Stars, Thibault stated that one of the "biggest keys to playing San Antonio is to take away their three point shot." Last Tuesday, a/k/a the "Dolson Domination" game, the Stars only made 2-of-15 of their threes. In the first quarter of this game, this is how San Antonio did: 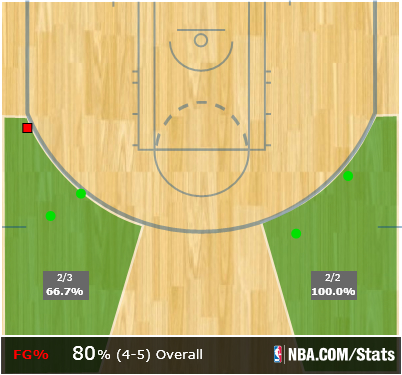 The Stars' shot chart only from the three point line in the 1st quarter.

Yeah. Becky Hammon got hot from beyond the arc and made all three of her attempts, and Kayla McBride made another. Meanwhile, the Mystics in the first quarter failed to make any of their four three point attempts. Needless to say, it was 27-18 Stars after the first, and the Mystics played catchup from thereon. Ultimately, the Stars made 7-of-15 threes while the Mystics were 2-of-17.

After being down by double digits at several points throughout the game, the Mystics did manage to make a run, and they led by two points with 8:10 left in the game after Kara Lawson made two free throws. But from that point on, the Stars shot 6-of-11 from the field, and scored 17 points along with free throws. Another thing about this run for the Stars. All but one of those shots were near the rim. 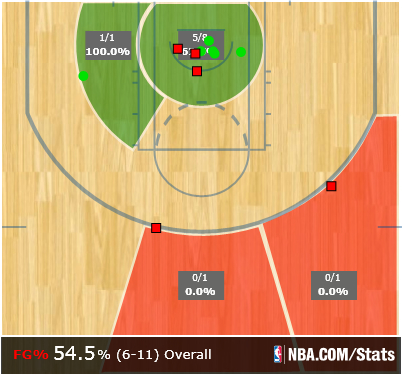 The Stars' shot chart from 8:10 in the 4th quarter until the end of the game.

The Mystics on the other hand were much worse, only shooting 3-of-11 after they got their quick lead.

If you look at the box score, there were some things that Washington did well. They outrebounded the Stars 40-34. They also kept the turnovers in check generally speaking, only committing 12 of them. Nowhere close to the 31 they committed against the L.A. Sparks in the triple overtime classic. However, the Stars also scored 18 points on those turnovers. Then the Stars committed even fewer turnovers themselves. They had nine total.

Monique Currie scored 18 points on 7-of-14 shooting, while Ivory Latta also had an efficient night herself with 14 points. Latta also made both of the Mystics' threes. Ultimately, their efforts weren't enough.

There are also some other things that don't really show up on the box score or on a shot chart. First, the Mystics missed several layups at the basket. Then, there were several times where there wasn't much ball movement within the Mystics' offense, and that forced some buckets late in the shot clock.

So at the end of the day, the Mystics did some things well when you look at the box score. But they failed to limit San Antonio's three point game early, and they also failed to make some easy buckets on their end as well. Hopefully these things change as they head toward the second half of the regular season.