Share All sharing options for: Storm vs. Lynx final score: Little has career-high 31 points, leads Seattle to a 81-71 win

I gotta admit. Despite my quibbles with the team's strategy and the like, the Seattle Storm is better than its current 7-10 record.

First let's talk about Little. She was on point tonight, in particular at the rim and at close mid-range. She also made two of her four three point shots. Here's a visual representation of her performance: 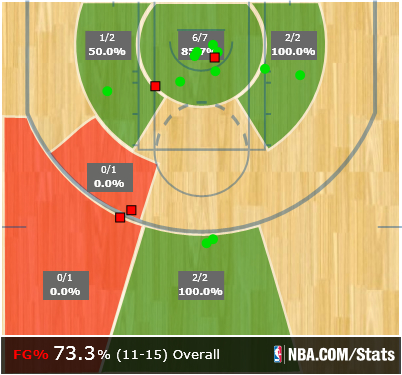 In addition for the Storm, Jenna O'Hea added 15 points off the bench where she made five of six threes. Sue Bird and Crystal Langhorne added 11 each for the victors. For the Lynx, Maya Moore led the team in scoring with 20 points and added 10 rebounds, while Damiris Dantas and Lindsay Whalen added 12 and 11 points respectively.

After a blistering 7-0 start, the Lynx have been 4-5 since, and they also have come up winless in two tries against the Storm. They will have a very quick opportunity to try to even up things against Seattle, as the two teams will face off in Minneapolis this Sunday.