Penny Taylor had her best game in two years with 20 points to keep the Mercury close and Taurasi hit a late three to seal the victory versus the Fever at Bankers Life Fieldhouse.

Coming into tonight's game versus the Fever, the Mercury had gone 3-0 since moving Penny Taylor into the starting lineup in place of Erin Phillips and one had to imagine with the Fever's recent struggles, that streak would continue. The Mercury scored the first points of the game on two free throws from Taurasi but from there it was a struggle. Phoenix finished the game with a season-low 8 assists but showcased a skill that has seemed to be lacking in the last few seasons: resiliency.

Being that I've been a Mercury fan faithfully since 2004, I've seen quite a few games and one things I can say about the team is that in games like this, the last three seasons especially, the Mercury would hang their heads and eventually bow out quietly. Not tonight.

With Indiana coming in and playing the scout to perfection, Sandy Brondello's team was forced to adjust. The offense was unable to create the openings that had been there prior so the Mercury went to isolation basketball. Now this wasn't the high-school caliber isolation basketball, it was good basketball players scanning the floor searching for the mismatches.

Candice Dupree is impossible to guard in space from 17 feet in and since the Tulsa loss, there seems to be a concerted effort to take advantage of this as she took 15 shots in this game, hitting 7 for 18 points, and hasn't taken less than 12 since the slip-up against the Shock. Dupree also seems to be making more of an effort on the defensive end as she came up with three very solid blocks in this game.

The same can be said for Penny Taylor. Even when healthy, the best part of Taylor's game has long been the bag of tricks she brings to work everyday. Seeing a defender cut her off only for her to counter and still find a way to get a shot off is an art in itself and she quietly combined with Dupree to keep the Mercury in the game as she shot 8-of-11 for 20 points and added 4 boards.

Here's a visual example of exactly how Taylorwent about getting the job done, primarily from the inside: 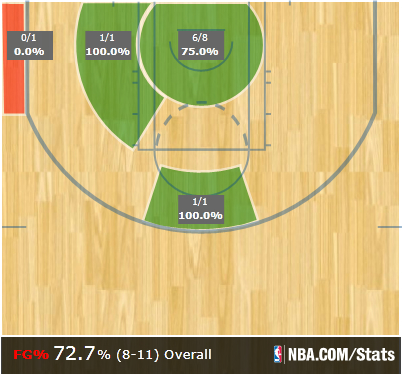 What I found most impressive about this game was the play of Brittney Griner. Especially considering the stretch she's had recently, she could've easily forced way more than the six shots she took.

The Fever came into this game clearly illustrating that Griner would not beat them. While she didn't have her best offensive game, scoring just one basket and finishing with 4 points, Griner decided to continue to play hard and impact the game from the defensive end, tying a career-high six blocks.

Phoenix: The Mercury seem to have truly committed themselves to Brondello's style of play, which is similar to the way she played at her peak. Solid defensively. Closing out to shooters properly and rotating to play the next pass.They've always taken really good care of the ball. This was a game in which Taurasi and the gang could have easily started throwing the ball around and turning it over but even though Indy came in with a solid game plan, this team took care of the ball to the tune of only 7 turnovers; all this while forcing the Fever into 17, 8 individually from Briann January.

This team owns the best record in the WNBA for a reason. The scariest part is that DeWanna Bonner has still yet to really find her role on this team offensively. She's done a good job of knocking down the open shots she's gotten, but I still think Bonner could be a 13-15 point a night scorer once she figures out where her shots should come from.