Emma Meesseman beat the Connecticut Sun, 69-63. That is all.

Washington Mystics forward Emma Meesseman scored a career high 22 points on 11-of-14 shooting. She matched her career-high in rebounds (for the second straight game), grabbing 13 of them. She dished two assists, stole the ball three times, AND blocked two more shots. Those are EXCELLENT fantasy numbers.

BUT here's the most important part. The Mystics beat the visiting Connecticut Sun, 69-63 to get their first winning streak since June 1. And the score is closer than the game really was given that the Mystics were leading by as many as 13 points in the fourth quarter. But I digress. Why?

Meesseman was on fire all night. I'll first show you her shot chart for the whole game, just to show just how well her shot was falling: 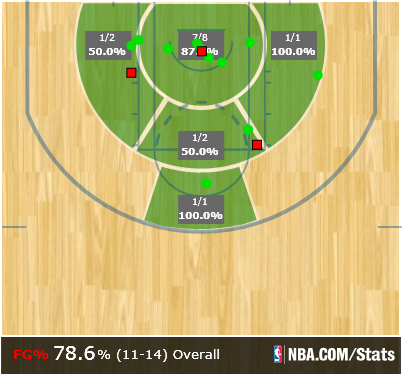 There were times earlier this season when she would be aggressive finding her shot in the first quarter, but then she would disappear after that. This game started like that when Meesseman scored six points in the first quarter, and only two more in the second. And in the second quarter, the Mystics were sloppy where they committed five turnovers and only shot 26.7% for the field.

But in the third quarter, Meesseman scored 10 points on 5-of-7 shooting, and grabbed seven rebounds. She totally dominated the quarter in a way that I have never seen her do before.

If someone came into this game pro-OGS, this game was "supposed" to be about a Maryland Terrapins basketball reunion with Sun rookie Alyssa Thomas playing against Mystics sophomore Tianna Hawkins. Furthermore, Thomas was named the 2013-2014 ACC Female Athlete of the Year, just days before the Terps' official entry into the Big Ten Conference.

Instead, we watched Meesseman spoil those storylines and show why she is a rising star in this league.

That's right. I said it. She's a rising star in the WNBA. Some folks in the WNBA were wondering why the Mystics decided to acquire Bria Hartley and Hawkins in exchange for another starting player. Well, after seeing this performance, those guys know that this performance is one of the main reasons why, in addition to what their acquired players bring to the table.

I felt really down on this team during their recent road trip. But I'm feeling good about them once again after their last two wins.

Mike Thibault's press conference is embedded above. Click here for the link from Monumental Network if you can't see it.