Wake Forest's Dearica Hamby, Mykia Jones, and Jen Hoover chill out for a cause

Share All sharing options for: Wake Forest's Dearica Hamby, Mykia Jones, and Jen Hoover chill out for a cause

WINSTON-SALEM - The Wake Forest women's basketball team took its turn Monday in the "Chillin4Charity" campaign currently sweeping the country, staging their version of the popular event at BB&T Field. Head coach Jen Hoover, surrounded by her staff along with players Dearica Hamby and Mykia Jones, were each doused by a cooler full of an ice-cold sports drink after calling out colleagues and former teammates to participate in the charity initiative.

The campaign had several incarnations before University of Arizona coach Niya Butts re-directed the movement to the women's college basketball world. The "rules" of the challenge require the challenger to donate money to a designated charity and then challenge someone else to take the "cold water" challenge. If the challenge is not met within a set time amount then the offending party donates a significant amount to the charity. If met, the challenged becomes the challenger, and the campaign moves forward ad infinitum.

"I have former teammates and friends that I have back from home that were doing it like Andraya Carter from Tennessee," Hamby said. "I saw her tweet about it and I saw some of the other ACC coaches talk about it so I mentioned it to Coach Hoover and I volunteered myself to do it." 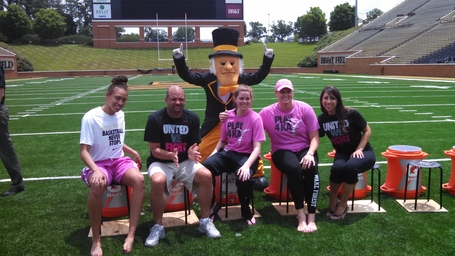 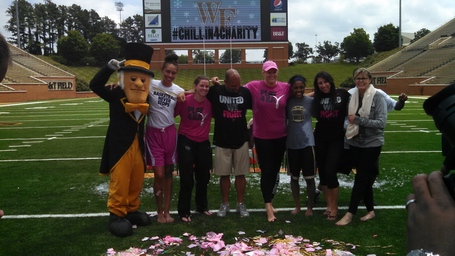 The charity of choice for Wake Forest and other participating NCAA schools is the Kay Yow Cancer Fund, established by the late N.C. State head coach during her battle with the disease. Teams across the country play special games each season to benefit the fund, often wearing pink uniforms that are auctioned off following the contest. Each instance of these "Chillin4Charity" events means the Yow Fund gets a donation.

"It started going across the country, and I kept waiting to see who was going to call me out," Hoover said. "Joye Lee-McNelis (Southern Miss) and Jaida Williams (Coastal Carolina) texted me and challenged me. I know Dearica was really excited about it, right from the get-go she was like, ‘I'm down.' Anytime the Deacs can get together for a cause and do it as a family, we're going to do it."