The sophomore guard leads the Black and Gold to their first road win of the 2014 season.

Diggins, who entered today's contest averaging 18.3 points and 5.6 assists per game, had yet another efficient shooting performance, making 11 of her 20 shots. She also converted 10 of 13 free throws. What stood out was that Diggins concentrated her shots at the rim, and made 10-of-13 shots at the basket. Her shooting chart is shown below: 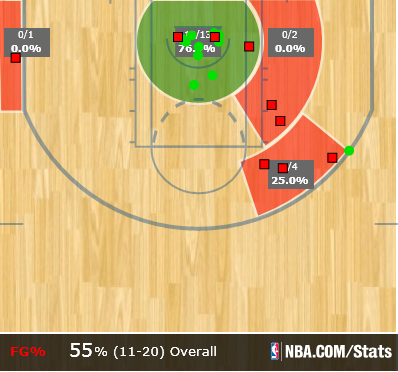 I should note that Diggins also had six steals for the game, but also had seven turnovers, which was probably the only negative part about her game today.

Meanwhile, her backcourt mate, Odyssey Sims also had an efficient night, where she scored 18 points on 7-of-15 shooting and made both of her three point attempts. Sims also had nine assists, and just one turnover. Overall, I'm really impressed with the Diggins-Sims backcourt, which is clearly shaping up to be the best young guard duo in the WNBA.

So how did the Shock win this game? With 2 minutes and 23 seconds left, Jessica Breland made a shot to make the score 86-79 in favor for Chicago. However, Glory Johnson led Tulsa with six points and Jordan Hooper made a three pointer in the final two minutes of regulation to ultimately make the score an 88-all tie. Sims also had two assists in that time span.

Tulsa then headed into overtime with momentum on its side, and it continued. They shot a very hot 85.7% (6-of-7) from the field in the extra period, while the Sky made 42.9% of theirs (3-of-7). Though Epiphanny Prince led all scorers with 8 points in overtime, only two other Sky players scored during the period. For the Shock, five players scored at least one point.

So how dominant was the Shock from 2 minutes and 23 seconds left in the fourth quarter until the end of the game? The Shock outscored the Sky, 26-15, making 9-of-10 shots, while the Sky made 5-of-13 of theirs. Then the Shock also out-rebounded the Sky, 7 to 3. In other words, it was a dominant performance for the Black and Gold.

For the Sky, Jessica Breland had an excellent game, scorign 26 points on 12-of-16 shooting, grabbed 10 rebounds, dished five assists, and blocked seven shots. Then Prince added another 24 points and dished eight assists. In fact, the Sky had the upper hand to win the game for most of regulation, in particular during the second quarter, when they outscored the Shock, 24 to 11.

But, with the exception of the second quarter, the Shock outscored Chicago in every other period. This is definitely a great win for Tulsa, and should give them more confidence as they head into their next game this Wednesday against the Indiana Fever.

Meanwhile for the Sky, they have lost two in a row and six of their last seven. They need to find a way to get out of this skid despite the loss of their frontcourt due to injuries and illnesses, and quickly.