The Sparks' 87-77 win over the Shock was neither as close as the final score nor as easy as they made it look in the third quarter.

The Los Angeles Sparks 87-77 win (boxscore) over the Tulsa Shock at Staples Center tonight was far closer to the type of performance most WNBA fans would have expected from them this season.

They had their share of defensive lapses, but turned up the defensive intensity in the third quarter to hold the Shock to just 31.6% shooting; they didn't dominate the glass, but turned around a poor rebounding first half to hold the Shock to just 2 offensive rebounds in the third period. They doubled Shock guards Skylar Diggins and Odyssey Sims out of pick-and-rolls to hold the dynamic duo to a paltry combined 2-for-8 shooting and 0 assists during the third - although turnovers don't loom as a major factor in the Shock's loss, the inability of their guards to make the type of plays they had been during their four-game winning streak put their offense into disarray.

Offensively, there were signs of the wavering focus that have plagued them throughout the season, but after studio commentator Dave Miller noted that they might have been settling for a few too many jumpers the Sparks came out and adjusted their shot selection in the third quarter as well - after shooting more than half of their shots outside the low post in the second quarter, the Sparks pounded the ball inside in the third. 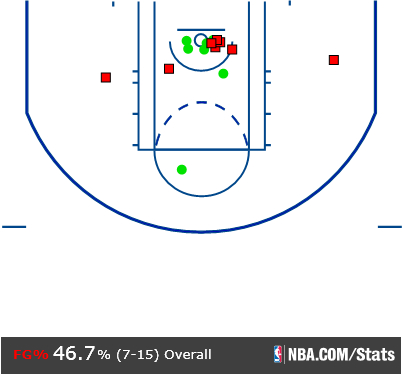 Ultimately, although Tulsa managed to play L.A. even in the second half on the strength of a meaningless late run, the Sparks' 25-16 third quarter gave them enough of a cushion to coast to a much-needed victory at home that ended a four-game losing streak during which they looked somewhere between mediocre and needing to make some serious changes.

It was by no means a perfect performance for the Sparks, but it also shows that so much of what was going awry for them had little to do with the things that show up in the boxscore: despite Candace Parker's standout all-around performance (24 points, 7 rebounds, 6 assists) and Jantel Lavender's efficiency in the high post (18 points and 13 rebounds), so much of this win for the Sparks was about defensive focus, unselfishness on offense, and simply playing with the type of intensity that makes it look like they cared about the outcome.