The Atlanta Dream (8-3) won its fifth straight game over the Washington Mystics (5-7) at home Wednesday, 83-73, by making points in the paint and overcoming an early three point barrage.

These two teams met last Sunday, with the Dream winning that contest, thanks to scoring 18 points off of offensive rebounds, while the Mystics didn't score any off of theirs.

This time, the Dream beat the Mystics 83-73, thanks to dominating the Mystics inside the paint, where Atlanta scored 48 points, as opposed to Washington, who scored 28. Here's a visual representation of their performance: 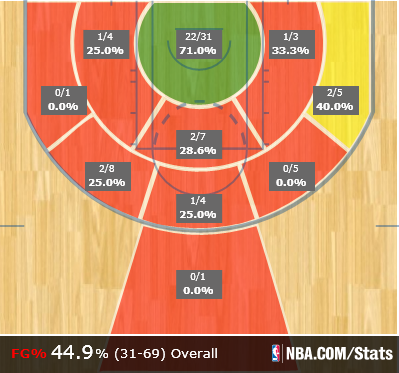 Overall, the Dream wasn't efficient anywhere else on the court. But whether it was Erika de Souza, Aneika Henry, Sancho Lyttle, or Angel McCoughtry (who scored 10 of her team-leading 27 points in the third quarter to give the Dream the lead), they made a great effort to take it to the rack and they were making their baskets at a high rate.

Yes, the Mystics came back in the fourth quarter to lead again 66-63 early, but the Dream then went on a 14-0 run that sealed the deal. It wasn't one of those runs where the Atlanta scored four three point baskets in a row. But rather, it was done from baskets at the paint, and at the free throw line, which made this game demoralizing at that point.

It should be mentioned that the Mystics were leading for most of the first half of this game, thanks to some hot shooting from Ivory Latta and Bria Hartley who made six out of Washington's seven threes for the first half. However, the Mystics never appeared to be aggressive towards making shots at the basket and at least try to get to the free throw line if nothing else. Then in the second half, the Mystics cooled from three, making only one shot out of seven attempts.

Here's another startling stat. The Mystics had no free throw attempts in the first half despite leading, and only had four attempts all game. The Dream had more. You can look that up in the box score. Therefore, based on what I was seeing in the first half, I didn't see the Mystics realistically winning this game, even though they were leading for much of the first half.

This loss really hurts for Washington, mainly because they did not show the aggression that Atlanta had all game with the inside game. They just can't have a performance where they aren't fighting their way toward the free throw line and expect to win. And their next contest is against the Minnesota Lynx this Friday at Target Center.

Hopefully they put forth a better effort then. And perhaps get some luck too.