Skylar Diggins had a career-high 26 points to lead the Tulsa Shock past the Seattle Storm for a fourth consecutive win.

Tulsa is about to win their fourth straight game for the first time since August 22-27, 2009.

Skylar Diggins is going to steal the headlines for the Tulsa Shock's 85-79 win and deservedly so: she scored a career-high 26 points, including 11-for-12 shooting from the free throw line.

Perhaps the defining moment of the game, and maybe even the entirety of her second season thus far, was consecutive three point play opportunities off jumpers in the paint with the Shock down by three points with 3:30 left in the fourth quarter. Diggins missed the free throw on the first opportunity - and the calls might have been an early sign of her getting superstar respect from the officials - it put an exclamation point on a career day.

After Diggins' pair of plays gave the Shock a two point lead with 3:12 left, putting the finishing touches on a big game with a 12-point fourth quarter. The Shock never relinquished the lead after being down by seven just two minutes earlier.

That was far closer to the player we grew accustomed to at Notre Dame: the point guard capable of making plays to will her team to victory in clutch moments. With Diggins leading the way, the Shock went on a 16-3 run over the final four minutes to seal the victory.

Yet beyond Diggins, this was a team effort. Backcourt mate Odyssey Sims had a team-high 6 assists despite a poor shooting night. And the play of Courtney Paris - experiencing a career year of her own - was impressive both due to her scoring (16 points and 12 rebounds) and her defensive effort, as described by Chuck Chaney of Shocking Tulsa.

Paris helped hold Crystal Langhorne to just eight points on the evening. Langhorne scored 23 points easily against Tulsa in their previous meeting. However, Paris’ physicality took over and Langhorne never looked comfortable in this contest.

"I took it very personally," said Paris on her defensive of Langhorne. "I put that on me. Second half of that game I didn’t challenge her. The effort wasn’t there for me. I have been carrying that around me for a long time. So, I wanted to make sure we turned things around a bit."

With Langhorne being neutralized and Glory Johnson adding a team-high 13 rebounds to Paris' effort, the Shock dominated the paint: the Shock won the offensive rebounding battle 12-5 to outscore Seattle 17-6 in second chance points - including that second three point play by Diggins - to contribute to a 42-26 advantage in the paint. Those high percentage shots helped the Shock shoot a scorching 57.1% in the fourth quarter to offset the Storm's 54.8% shooting through the first three. 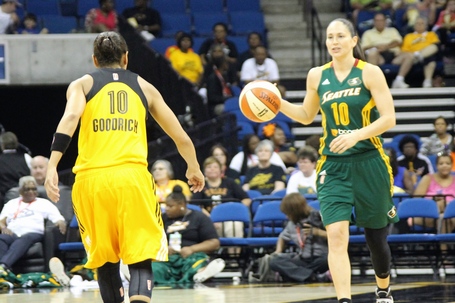 Wright scored a team-high 24 points to help the Storm mount their seven point fourth quarter lead with two big threes in the first half of the period. However, her help dissipated in the second half: Sue Bird finished with 12 points and 3 assists, but had no assists in the second half while Shekinna Stricklen contributed 11 points but went scoreless in the second half.

Individual performances aside, the win is Tulsa's fourth in a row. After an 0-5 start to the season, that's significant not only in the standings where they have risen to fourth place or because they'll have a shot at .500 in their next game but because it's the Shock's first four-game win streak in Tulsa - there has been talk of progress since the relocation for a while now, but they might finally be turning the corner this season.