Stars vs. Storm Final Score: San Antonio gets blown out Friday by Seattle, has to rebound against Sparks Saturday

The San Antonio Stars are downright skidding after getting their teeth kicked in by a Not So Good This Year Seattle team. Now they get to play Los Angeles. Good luck!

Share All sharing options for: Stars vs. Storm Final Score: San Antonio gets blown out Friday by Seattle, has to rebound against Sparks Saturday

So, the San Antonio Stars have problems right now. They lost Friday to the Seattle Storm, 79-72, in a game which was nowhere close to what the score indicated. But more on that later.

The thing about basketball is that it's a game where the team that scores MORE points wins. San Antonio hasn't been scoring a whole lot, mostly because their shooting has been garbage and -- no, wait, that's pretty much it.

Defense wins championships, right? Okay, cute, that's fun to say, but when your offense is THIS BAD it doesn't matter how good your defense is. Also, the Stars' defense hasn't been that good. In fact, the San Antonio Stars are currently the worst defensive team in the WNBA! What an achievement for this squad. 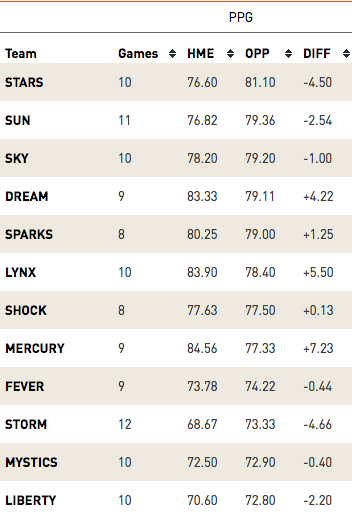 Take a look at the Seattle Storm's averages. They scored 10 more points than they average last night and allowed one fewer. The Stars gave what is one of the worst teams in the league (by the numbers, anyway) an above-average performance AT HOME after a week off. That, friends and esteemed enemies, is a crappy performance.

Not to be one of those people, but the seven-point deficit at the final buzzer is not indicative of the way this game was played. Seattle led by 19 points going into the fourth quarter - they led by 15 points at the half. This isn't a story about the plucky Stars making the final score respectable -- it's about the three garbage quarters they played that gave the Storm a reason to rest their starters.

Kayla McBride did not play well today, nor did she play well against the Mercury last week. Expecting consistency out of a rookie is a mistake so her slump is both excusable and not particularly noteworthy other than it's obviously contributing to the Stars' poor play. One of McBride's best assets is her 3-point shooting, an area the Stars also typically rely on Jia Perkins in.

Unfortunately, the Stars have a bit of a live-by-the-three-die-by-the-three thing going on right now. They shot 3-18 from 3-point range on Friday night. That's, uh, really bad. They're still the second-best 3-point shooting team in the league with a .358 shooting percentage from long distance; so perhaps last night can be chalked up to the shots just not falling. The looks San Antonio got weren't particularly bad - and I never got the feeling that they were forcing up overly difficult shots. Over the course of a season percentages tend to balance out, so maybe this is just the basketball gods punishing the Stars for Perkins and Hammon's never-missing-a-three-again runs early this season.

Tonight San Antonio has the chance to rebound against one of the best teams in the league after losing to one of the worst. It's not exactly a prime position to be in, particularly since the Sparks lost a close game last night that allegedly will have the team Fired Up for tonight's game. I don't really know if that means anything -- they're professional athletes, so I assume they come out hard for every game -- but if anything it certainly won't make the Stars job any easier.

You may recall that the Sparks kicked the heck out of the Stars in their first meeting, a 20-point loss for San Antonio in Los Angeles. The Sparks are a very good offensive team. They average 80 points a game this year and have this pretty good player you might have heard of in Candace Parker; heck, Nneka Ogwumike is no slouch herself. They are desperately looking to get over the championship hump this season -- losing a close game to the Tulsa Shock isn't exactly something they're looking for.

Tonight's game tips off at 7 p.m. CST. I'll have the usual recap up on Monday morning -- please excuse the vomit stains, I'll be suffering from severe United States Soccer Anxiety.