The Washington Mystics (5-5) beat the Chicago Sky (5-5), 79-68, snapping a three-game losing streak. They also got their offense clicking once again, shooting 47.1% from the field while the Sky only made 38.2% of their shots.

Share All sharing options for: Mystics vs. Sky Final Score: Washington gets back to .500 with a 79-68 victory

The Washington Mystics have been in a funk as of late, as they haven't been able to get their offense clicking in their last several games. But today, their offense finally got back in a groove once again as they beat the Chicago Sky, 79-68. 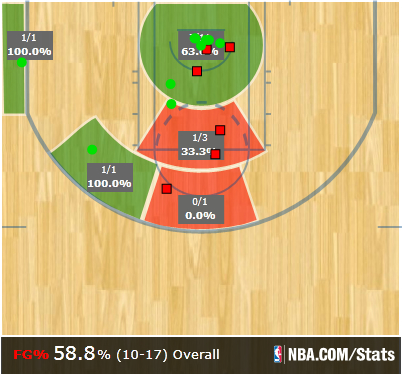 The Mystics' shot chart in the 4th quarter from the NBA's media site.

Kara Lawson led the Mystics in fourth quarter scoring, with eight points on 3-of-3 shooting after going scoreless before that point. She however contributed in a big way as a playmaker, dishing out 10 assists for the night.

The player of the night however was Emma Meesseman, who her first career double with 16 points, 11 rebounds, five steals, three assists, and two blocks. Her presence was felt on both ends of the court tonight. In the fourth quarter, while she only scored four points, she played great defense. Meesseman had three steals and a block during the fourth.

Bria Hartley and Tianna Hawkins also scored double digits for the night with 13 and 10 points respectively.

For Chicago, Allie Quigley led all scorers with 18 points off the bench, while Epiphanny Prince added 17 more. There were some times where Chicago led, including the third quarter. But all-in-all, the Mystics were in control of the game and came out with the W in the end.

After a strong 5-1 start without Sylvia Fowles, it was looking like the Sky could be in good position to be the top seed in the Eastern Conference's regular season for the second straight year. However, they now have lost four straight games, and just played their second straight game without forward Elena Delle Donne, who had a recent flare-up of Lyme Disease. She will be re-evaluated Monday, per the Chicago Tribune. Let's hope that Delle Donne gets back in action soon, because this team needs her in order to make a big playoff push.

For the Mystics, this was a much-needed win. A loss here would have dropped them to 4-6, just shy of the Eastern Conference cellar. Their next five games include a home-and-home against the Atlanta Dream, then three road games against the Lynx, Storm, and Stars. Their record over these next five games will play a big part as to where they will ultimately be in the Eastern Conference standings.