Sun vs. Mercury Final Score: Bentley and Douglas lead Connecticut to a 96-95 win

All five starters reached double figures for the Connecticut Sun, who defeated the Phoenix Mercury 96-95 at Mohegan Sun Arena for their second straight win.

Share All sharing options for: Sun vs. Mercury Final Score: Bentley and Douglas lead Connecticut to a 96-95 win

UNCASVILLE, Conn. – A couple weeks ago, the Connecticut Sun probably would have surrendered their fourth-quarter lead against one of the league's best teams, a team that is lead by Diana Taurasi and Brittney Griner.

The Sun have turned a corner, it would seem. The frail, inconsistent and sometimes confused that strung together loss after dissatisfying loss is gone, replaced by a team with confidence, a team on the rise that managed to hold off the Phoenix Mercury for a 96-95 win at Mohegan Sun Arena Thursday night.

For some, Connecticut's win could be considered an upset. For others, a remarkable escape. For Katie Douglas, however, there was nothing out of the ordinary about this win. Douglas, a 13-year veteran of the league and one of only two players on the Sun with five or more years of experience, has remained consistent in her comments about Connecticut, saying that it is a team capable of winning. To her, winning at Mohegan Sun Arena should be as ordinary as it gets.

I was proud of the way we were able to sustain their runs ... and make sure we got stops when we needed them. - Connecticut Sun guard Katie Douglas on defeating the Phoenix Mercury

"It's about the Connecticut Sun, no matter who we play," Douglas said. "And obviously, we respect every opponent, but we're a young team and we're just trying to find some momentum, and we're just trying to get better. Whether it's Phoenix, with their star-studded roster, or L.A., or anybody that comes in here...we've got to understand the importance of home games and protecting our home court.

"Tonight, you know, our opponent was Phoenix. We obviously respect them, they're a great opponent. I was proud of the way we were able to sustain their runs and come back and not lose our composure on them and make sure we got stops when we needed them."

Sun guard Alex Bentley was whistled for an offensive foul for running into Taurasi with 25.1 seconds to play, giving Phoenix the ball and a 24-second shot clock to work with.

Taurasi held the ball out beyond the 3-point arc for about 15 seconds before making her move. The UConn legend drove to the lane and missed. Griner got the offensive rebound, but could only manage a difficult, contested shot that bounced into the hands of Connecticut forward Alyssa Thomas as time expired.

"When you want to be out there, it's like what you're meant to do," Sun forward Chiney Ogwumike said. "You're meant to battle until the last shot, and it feels good to get a win off of defense, not just off of a miracle shot. Even though it was cool, you want to earn it, and we got that last stand and that's what we count on."

The "miracle shot" Ogwumike referred to was Renee Montgomery's 3-pointer from just in front of the half-court line to beat the buzzer and give Connecticut a 46-42 halftime lead.

Bentley ended the third quarter in a similar fashion, hitting a 3-pointer from 28 feet away as time expired to give the Sun a 74-71 lead. Despite four ties in the fourth quarter, Phoenix never led in the final 10 minutes.

After a 21-point explosion in Saturday's 88-71 win over Indiana, Bentley was again a star for Connecticut, contributing 22 points on 9-of-12 shooting, breaking the her career mark that she set last time out. Douglas also added 16 points, and made all four of her three point shots. Their combined shot chart is below: 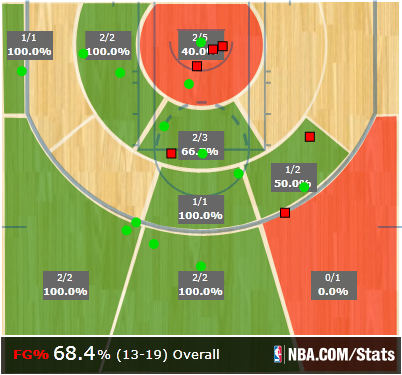 All five Sun starters reached double figures, while the bench added 23 in one of the Sun's more impressive team performances of the season.

The results are starting to come for Connecticut, like Douglas and others always said they would — Thursday's win means the Sun end their four-game home stand with a 3-1 record. Not only are the results starting to fall into place for Connecticut, but the team looks more relaxed. There is a better understanding between teammates and coaches. They are actually hitting shots. Everything is clicking, and in Bentley's opinion, they have an identity now.