After an 0-5 start, the Tulsa Shock have won their second straight game. Led by an impressive fourth quarter performance from Skylar Diggins, the Shock's guard play gave the visiting New York Liberty fits throughout.

The New York Liberty have a pretty good collection of talent with individuals that have accomplished quite a bit.

But to this point in the 2014 season, they simply aren't a very good team by any standard and anyone hanging on to pre-season expectations to the contrary needs to adjust accordingly.

Accepting that they've actually performed well beneath what fans and analysts imagined after trading for Tina Charles makes it much easier to see today's 72-57 loss to the Tulsa Shock as more of another disappointment in a young season with a surprising number of them than a surprising loss.

@JBowman_SA I don't know if it's that surprising. The score though, that's surprising.

Charles was the lone bright spot for the Liberty today, scoring a game-high 25 points and grabbing 10 rebounds in a game in which the Liberty never led, were out-rebounded, and had 9 first half turnovers that led to 12 Shock points. Ultimately, the loss was a microcosm of the multitude of problems that the Shock have struggled with throughout the season, but none looms larger in the box score than Shock guard Skylar Diggins' team-high 21 points and game-high tying 7 assists.

After the Liberty reduced a 15-point third quarter deficit to just five after a Charles free throw with 9:24 left, the Shock's dynamic perimeter play really caused them problems even with reigning Sixth Woman of the Year Riquna Williams missing the entire quarter with an apparent ankle injury suffered during the third quarter. Diggins scored 10 of her 21 points in the fourth quarter, seemingly able to get into the paint at will with all four of her made shots coming inside the key in addition to earning three free throw attempts - a layup and a three point play. 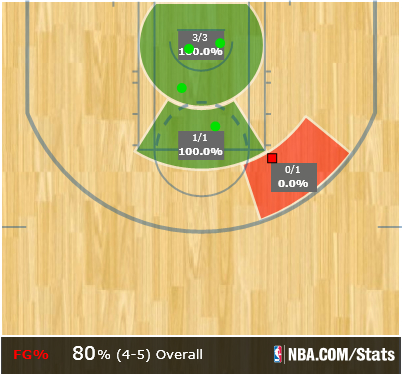 The Liberty didn't exactly do much to keep Odyssey Sims out of the paint either: although Sims only shot 3-for-11, looking at where both she and Diggins got their shots only reinforces the point that the Liberty did a poor job of staying in front of Tulsa's main guards. 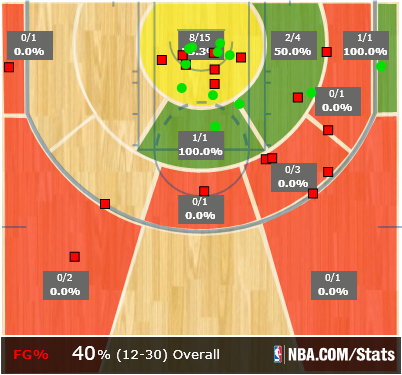 As illustrated in the chart above, Tulsa's starting backcourt got 50% of their shots within five feet of the basket. A few of those are transition baskets and clearly they didn't convert every shot. Yet the chart reflects the ease with which Tulsa's guards got into the paint to loosen up the defense - if they weren't scoring, they were able to probe the Liberty's defense and kick out to shooters.

Three of Diggins' 7 (recorded) assists came in transition, the last of which was the result of Odyssey Sims making a weak backcut as nobody picked her up as the Shock brought the ball up the court at half speed. But the rest were plays in half court sets on passes to shooters who were able to get shots off before Liberty defenders were able to contest.

Outside of Tulsa's guard play, their frontcourt was extremely effective inside and out. Despite Charles' strong performance, Shock center Courtney Paris continued her solid play this season with a career-high 16-rebound, 12-point double-double of her own. Although the Liberty managed to effectively turn Glory Johnson into a low-efficiency jump shooter on offense - she shot just 2-for-14 - she managed nine rebounds and did a solid job defensively.

Off the bench, rookie Jordan Hooper continued to play well with 8 points, including a pair of threes - the threat of her shooting ability gives the Shock's guards an extra target and she's proven able to knock shots down when she gets looks. And once again, Tulsa's biggest lead (17) came in the second quarter when Hooper and Riquna Williams were in the game to spark an 11-3 run.

The young Shock seemed to have figured something out after a rough start while the experienced Liberty continue to look for their first consecutive wins of the season.