The Washington Mystics (3-2) beat the Los Angeles Sparks (2-2), 92-84 in triple overtime where they overcame 31 team turnovers. A big character win for one of the WNBA's youngest teams.

In a press conference after the Washington Mystics' 92-84 triple overtime win over the Los Angeles Sparks, Mystics General Manager and Head Coach Mike Thibault was glad to see that his young team "survived a test." A test where they played toe-to-toe against a more talented Los Angeles Sparks squad, and committed 31 team turnovers along the way.

Through it all, they persevered and came out on top. Thibault then said that "I'd rather much learn those lessons and get a win at the end than say it was a great learning lesson, and have a loss." You can watch the press conference above, but if you cannot see the embed, click here for the link from Monumental Network.

I'd rather much learn those lessons and get a win at the end than say it was a great learning lesson, and have a loss.-Washington Mystics Head Coach Mike Thibault

There's another major thing to talk about during this game during the overtime periods. Thibault decided to play a lineup which consisted of Latta, Bria Hartley, Jelena Milovanovic, Emma Meesseman, and Stefanie Dolson for nearly the entire time. These five were also playing toward the end of regulation.

That's three rookies, one sophomore, and one veteran squaring off against Candace Parker, Nneka Ogwumike, Lindsey Harding, Arminitie Herrington, and Alana Beard, who played most (or all) of the overtime minutes for the Sparks. Two of the Mystics' veterans, Kia Vaughn and Kara Lawson did not play at all during any of the overtime periods. Monique Currie was only there for a few seconds, but to be fair, she did score 14 points in the game. Without Currie's performance in the first half especially, the Mystics may not have been in position to win the game.

I was particularly impressed with the shooting efficiency of Bria Hartley and Stefanie Dolson who scored 20 and 14 points respectively during the game.

Hartley did not just lead all Mystics players in scoring, but she also led all Mystics scorers in overtime, scoring 10 points, making three of her four shot attempts and three out of four free throws.

And for Dolson, I was very pleased to see that she had a very good day making her baskets at the rim, in particular against a team like the Los Angeles Sparks which features both Parker and Ogwumike in the low post. Here is her shot chart below, per the NBA's media site: 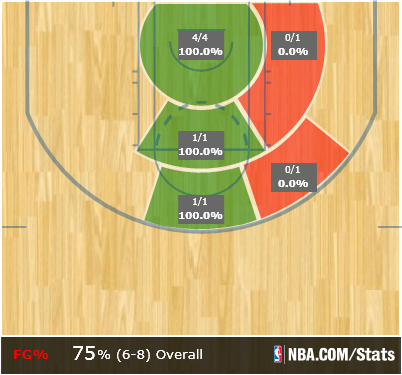 In previous games, Dolson has had a low shooting percentage making baskets at the rim, and it was very encouraging to see that she had this type of a performance against L.A. That said, Dolson committed six turnovers, including three in the overtime periods, so she needs to make better decisions with the basketball, in particular when she is looking to pass the ball.

Here's one last stat in the game that must be mentioned. The Mystics dominated the Sparks on the glass, outrebounding them 52-39. They did so again in the overtime periods, 13-9, but the Sparks had more offensive rebounds, 5-2. Rebounding has been something the team has worked hard on over the past week in practice, and it is good to see the results from that.

So who were the leaders for the Sparks? Candace Parker led all scorers with 32 points, but she took 28 shots to get there. Meesseman did a very good job defending her today. Ogwumike and Harding also scored in double figures.

I leave this recap saying this. The Washington Mystics' win today over the Los Angeles Sparks is a signature win in every sense of the word for this young group. But it could be even deeper than just a big win for this season.

When the Mystics become a perennial contender for the Finals and WNBA championships, we will look back at defining moments which significantly helped get them there in the long run. This game will definitely be one of them.