Mystics vs. Liberty Final Score: Latta takes over late to lead Washington to a 68-60 win

The Washington Mystics (2-2) got their first home win of the season by defeating the New York Liberty (2-3), 68-60. They did so under the hot hand of Ivory Latta, who scored 10 points in the last four minutes of the fourth quarter.

Share All sharing options for: Mystics vs. Liberty Final Score: Latta takes over late to lead Washington to a 68-60 win

The Washington Mystics will play eight of their first 11 games at home, so it's imperative that they start the year strong. Unfortunately, they lost their first two games at Verizon Center, and were on the verge of potentially losing this game after they gave up a 12 point lead early in the fourth quarter. At that point, it almost appeared inevitable that the New York Liberty would leave Verizon Center with a win.

The run started with Emma Meesseman making two free throws after Alex Montgomery committed a flagrant foul on her which tied the score. Then Jelena Milovanovic made the go-ahead three. Then Ivory Latta made a three pointer with just under four minutes left. And from there, Latta scored each of the Mystics' next three baskets, including a dagger three with 26.9 seconds remaining to give the Mystics a 67-60 lead. Here's a visual representation of Latta's shooting efficiency in the fourth quarter, from the NBA's media site: 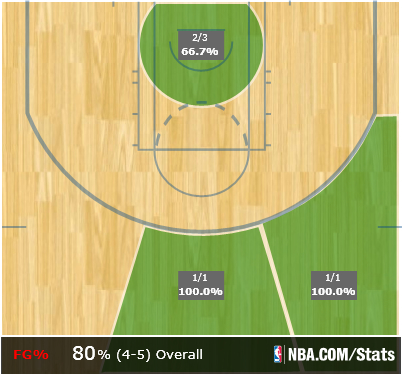 Again, Latta had a great performance tonight, and it also helped the Verizon Center crowd really get into the game.

There is another major storyline here as well. The Mystics changed up their starting lineup by replacing Kara Lawson and Monique Currie with Tierra Ruffin-Pratt and Jelena Milovanovic respectively. Considering that Lawson and Currie haven't been playing well, and that the Mystics were 0-2 with a starting lineup of Latta-Lawson-Currie-Meesseman-Vaughn, this doesn't come as a big surprise to me. TRP didn't score a single point in the game but had four assists, including a couple while on the fast break which were really nice passes. Milovanovic had 14 points on 4-of-12 shooting.

The Mystics also made a concerted effort on the rebounds, winning the battle, 41-26 overall. They also outrebounded the Libery on the offensive end, 13-5. Stefanie Dolson made two of those crucial offensive rebounds with four minutes left in the game by tipping them to her teammates. This included a tip where she set up Ivory Latta's first three in her takeover of the game.

The Liberty didn't have much scoring help. Cappie Pondexter had a very efficient night, scoring 20 points on 9-of-14 shooting, and Anna Cruz scored 12 points on 4-of-10 shooting with three made three pointers. But the rest of the team was 11-of-36 overall, and Tina Charles failed to score in double digits.

It remains to be seen as to whether the Mystics will keep this current lineup for Sunday's game against the Los Angeles Sparks. But this is definitely certain. Mike Thibault will not hesitate to bench starters and replace them with younger players who have been playing more consistently so far. And the starting lineup in this game showed us a good glimpse of the style of basketball that Thibault wants to implement long term.

Queenie will provide more thoughts on the game from a Liberty fan perspective soon.