Maya Moore didn't get 30 again. The Lynx have played three games in four days with three rotation players injured. And yet they're still undefeated.

In a clash of undefeateds featuring two of the league's most dominant scorers, the outcome of the game ended up being determined by the ability of everyone else to pick up the slack as defenses keyed in on the scoring stars.

Yet the point guard position ended up being the key positional battle and with the Sky's Courtney Vandersloot forced out of the game due to foul trouble in the third quarter, it was Lynx point guard Lindsay Whalen ultimately got the better of that battle as Minnesota picked up a 75-72 win on the road to remain undefeated.

What happened on the Sky's botched final possession? Vandersloot's post-game quote can be found here.

Whalen finished with a game-high 22 points and four assists and defended a seemingly flustered Vandersloot on the final possession of the game, which led to a contested desperation heave by Elena Delle Donne to try to send the game into overtime with a long three. Yet despite Whalen's clutch scoring down the stretch and solid defensive position on the final possession, it was her struggle to stay in front of Vandersloot throughout the game that helped the Sky stick around in a game that Delle Donne struggled to find her rhythm as a scorer.

Vandersloot finished with 10 assists and 8 points of 4-for-8 shooting - even when she missed shots, her ability to get into the lane and force the defense to rotate helped create opportunities for others. But her absence during a pivotal stretch of the third quarter that might have been more significant.

"I think Vandersloot having to sit out was a big key and I think Whalen was trying to be persistent putting some pressure on her, especially in transition," Lynx coach Cheryl Reeve said after the game, according to a Sky release. "That helped us in the end being able to use that advantage."

How is Minnesota still winning this game? They haven't hit a FG in almost 5 minutes #WNBA

Playing their third game in four days, the Lynx began to show signs of running out of gas in the third quarter as they went through as they went six minutes without a field goal. But Minnesota's ability to get to the free throw line offensively helped them maintain a lead. Meanwhile, the Sky were unable to capitalize on the Lynx's drought as they fell in love with their perimeter jump shots and Delle Donne managed just one basket through a double team on the low block. 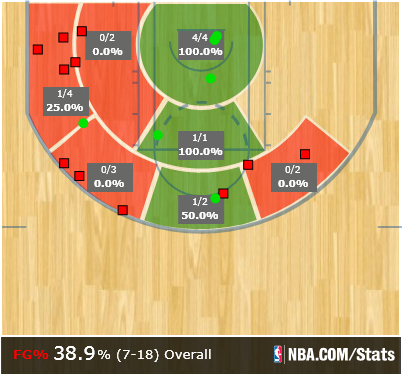 Although Lynx star Maya Moore fell well short of continuing her 30-point streak with just 14 points on 5-for-14 shooting, her role in containing Delle Donne can't be ignored: her game-high +10 plus/minus rating is a reflection of her dogged coverage of the Sky's star, both working to deny the ball, staying in front of her once she got the ball, and challenging her shots extremely well.

"Going into the game my biggest concern was defense," Moore said, according to the Sky release. "I knew I'd be matched against Elena and that was my main focus. If we can get some stops and our momentum defensively everybody feels better on the offensive side. Everyone stepped up and we shared the ball. Overall it was a really good team win."

Nevertheless, the game was a testament to just how well-rounded this Lynx team is: while Whalen led all scorers and Moore made her presence felt defensively, Seimone Augustus scored 17 points on 7-for-16 shooting, Janel McCarville had a team-high 12 rebounds and veteran free agent pickup Tan White came off the bench for 10 points and 4 steals.

The game wasn't exactly pretty as both teams shot under 43% from the field and the scoring stars were held in check, but that almost makes Minnesota's win more impressive: playing their third game in four days with three rotation players out, they could've been forgiven for dropping a game on the road (even if the Sky are missing two starters themselves). But to see them continue winning even on an "off day" for Moore is a testament to just how good this veteran group is and how scary they could become once they get fully healthy.