Maya Moore continues to cement her status as one of the WNBA's greats with a record fourth consecutive 30-point performance to help lead Minnesota to a 4-0 start.

AND she does it! Maya Moore with 30 points, becoming the first #WNBA player to post 30+ points in 4 consecutive games. #LosLynx

With a layup with 3:13 left in the fourth quarter, Maya Moore became the first player in WNBA history to reach 30 points in four consecutive games.

More importantly for the Minnesota Lynx, they've started their 2014 season 4-0 with tonight's 87-82 win over the visiting New York Liberty.

As impressive as the milestone itself is for Moore, the fact that she's doing it with such ease is arguably even more impressive: she's getting shots from just about anywhere she wants, which included 5-for-8 shooting from the 3-point line in tonight's win. 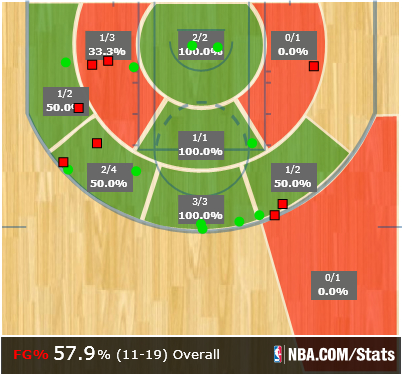 More amazing is that Moore's scoring prowess has managed to overshadow rather impressive performances from her Team USA teammates: Seimone Augustus scored 18 points on 8-for-16 shooting while Lindsay Whalen scored 20 points to go along with four assists. As a reminder of the team's balance, center Janel McCarville finished with a team-high six assists.

The Liberty weren't without bright spots of their own as they dominated the rebounding battle with a 37-28 edge led by Tina Charles' game-high 14 rebounds to go with a team-high 24 points. Rookie guard Anna Cruz continued to impress with her poise as a distributor and scorer with a game-high 7 assists and 8 points on 4-for-7 shooting.

But ultimately, Minnesota has the player playing the best basketball in the league right now along with All-Star teammates. And that's without three injured rotation players in Rebekkah Brunson, Devereaux Peters, and Monica Wright.