Alyssa Thomas has made her case as the best player ever at Maryland and there's a chance that you might hear people refer to her as "the female LeBron James" on draft day. But some fans have asked whether there's a women's basketball comparison for her and there might just be an option worth considering.

Earlier today, Todd Carton of SB Nation's Maryland site Testudo Times concluded his series exploring the best players in program history by making the case for Alyssa Thomas as the Greatest of All-Time.

You should read the whole thing if for some reason you're not already familiar with Thomas - and given how much of their content we've cross-posted this season, I find it hard to believe you're unfamiliar with her - but here are a few highlights that are most relevant to the 2014 WNBA draft:

Every year on draft day you hear people defining a player's greatness by their standing in program history. Very few can claim the type of resume that Thomas has - for someone coming from a major conference program, that range of statistical accomplishments is almost unheard of. The fact that she was responsible for about a quarter of her team's statistical production on a team that made the Sweet 16 three consecutive years, including this season's Final Four, only reinforces that.

So it's easy to see why people call Thomas the female LeBron James, as described earlier this season by Zack Ward, especially when you consider how much she did for the team last season. But some people have (justifiably) tired of the label, wondering instead whether there's a better comparison for Thomas, especially as she enters the professional basketball ranks where a comparison to LeBron carries even more of a burden. So as we've found comparisons for other players, can we find one among current WNBA players for Alyssa Thomas?

Possibly. First let's just quickly run down some of the things that make her such a strong prospect.

We've had a number of stories about Thomas this season, with the help of Testudo Times of course.

Alyssa Thomas discusses what motivates her

Carton touched on her rebounding, but I think what might get lost in all the talk of her "versatility" is that Thomas is an exceptional rebounder and has the size to contribute that, if nothing else, to a WNBA roster. Most importantly, she had an offensive rebounding percentage of 11.03% entering the NCAA Tournament, which I can tell you is better than quite a few post players who will be drafted today. It's an important indicator for success because it just happens to be the skill that transfers across levels the best in men's or women's professional basketball - whether she has an obvious WNBA position or not, there's a good chance that she'll be a plus rebounder at her position.

With an impressive rebounding presence on the defensive end as well (26.67% defensive rebounding percentage), her ability to grab boards and lead the break at her size makes her a huge asset for any team that has an interest in adding to their transition game. Her assist ratio of 18.48% and pure point rating of 1.06 is better than a number of guard prospects, including a number talked up as first round picks - she's that good at setting up scoring opportunities for others.

It should be mentioned that she has a loose handle and occasionally over-dribbles, but that critique can only be taken so far: she managed to cut her turnover ratio from 14.79% to 10.93% (pre-tournament) this season. Last season's turnover ratio could probably be attributed to the fact that she was just more responsible for her team's ball handling duties, but given how much she has the ball in her hands and the fact that she's the focal point of every defense the declining turnover ratio has to mitigate the major concerns about her ability as a ball handler.

And Carton's point about free throw attempts is particularly important given that she spent so much time on the wing. Her 36.88% free throw rate is down considerably from last year's 45.38% rate but still well above average for someone spending as much time as she does on the perimeter. Hitting 79.7% of those free throws helps her scoring efficiency quite a bit as someone who doesn't add much from three point range.

However, something not really touched upon well enough when discussing Thomas is her scoring efficiency. She significantly improved her 2-point percentage from 45.23% last season to 52.43%, which is in the elite range especially as someone who had a usage rate above 28% in both years. But the reason that's probably not discussed more often is that shooting is also her most noticeable weakness.

Alyssa Thomas has one glaring weakness that justifiably has people concerned about her potential to be as dominant in the WNBA: her shooting range is really poor.

I started to do a shot chart for her as I had with the other perimeter players in this draft, but at some point I stopped because every game pretty much looked like this: 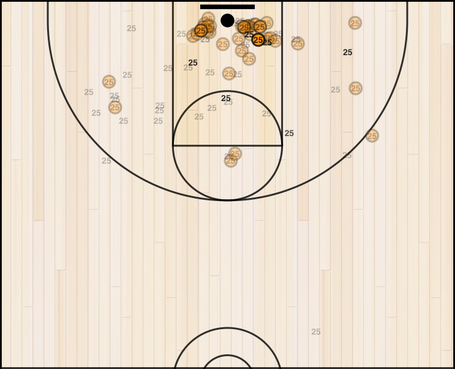 Alyssa Thomas' shot chart from five games during the 2013-14 season.

In short, Thomas is very efficient within five feet but considerably less so as you drift further from the paint. It really has to be taken into account that her role changed to more of an interior player this season, but it's also clear that she wasn't lacking for opportunities to score from mid-range both off the dribble and in spot-up situations.

Although her shooting range is certainly a weakness, the fact that she was still able to post a true shooting percentage of 57.2% (bearing in mind that 60% is elite) is actually quite remarkable - many players playing the wing with as much defensive attention as she gets would need the help of three pointers to post a TS% that good. Defenses sag off Thomas but she still just absolutely punished opponents in the paint, whether it be finishing around the rim or getting to the free throw line - even in the shot chart above, she shot 48.1% from the field, about 3% lower than average; the obvious weakness doesn't exactly prevent her from scoring more points than anyone in Maryland history.

Yet for some, this raises the question of whether Thomas is actually a positionless frontcourt tweener who has a perimeter skillset minus the shot but doesn't have the refined post game that would make her an impact post player. My initial reaction to that is to point back to the rebounding prowess: regardless of what positional label you want to apply here, she's very likely going to give you rebounds. My next reaction is to look back to the recent history.

Knocking Thomas for her shot makes sense in theory: if defenses sag off a perimeter player who can't knock down shots, she not only becomes a limited offensive player but also a liability to the team. But in reality there are enough examples with suspect shots - and far lower scoring efficiencies than Thomas - making it in the league either because they improve their shooting range or simply do other things so well that shooting range doesn't matter. And we haven't seen a player recently as good at "everything else" as Thomas to say with any certainty that lacking a shot will undermine her career.

Unfortunately, Catchings' career was cut short by injuries making it difficult to make an exact statistical comparison, but we can compare at similar time points and the similarities are strikingly consistent.

Similar prospects to Meighan Simmons based on SPI style ratings for 2008-2013 prospects.

Rebounds + steals + blocks per 40 minutes is a stat that NBA draft analyst Ed Weiland uses over at Hoops Analyst and, though it doesn't help all that much normally for the WNBA, I use it here to help understand what this group of players has in common: they're all versatile wings with really strong interior tendencies for whom scoring was not their primary contribution to the team.

Of course, they're also extremely different highlighting the fact that there just isn't really a good comparison to Thomas.

One Swish Appeal commenter noted that Thomas is Nicole Powell without the jumper, which matches what these numbers say. Nicole Powell was and has been throughout her pro career an outstanding three point shooter, which is just not reflected in these style numbers and that's actually helpful in a way because it highlights just how versatile she was at Stanford. The same goes for Gilbreath, albeit to a lesser extent, who was really not a great scorer in college but was an outstanding defender and did a lot of little things (including leading her team in blocks. The problem with the backhanded Powell comparison is that Thomas is so much more efficient at scoring inside the arc that we can expect her to be more than a spot up shooter.

You probably won't hear anyone say that Thomas is "a taller Karima Christmas" any time soon, but Christmas was another "power wing" who had a reputation for "playing bigger than she is" and just didn't have much to offer in the way of three point shooting - she emerged as a key contributor to the Indiana Fever last season and would be an absolute terror at 6'2".

Coming back to the Catchings comparison, it's not an exact match - and Catchings had almost as many three point attempts (23-for-67) in 17 games during her senior year as Thomas did in her entire four-year career (19-for-71) - but they're close enough to say that Thomas could very well have a similar impact on the game, if not quite to the MVP-DPoY-HoF type extent. As she did in college, Thomas is very much a player who could end up playing 3-4 positions in the WNBA. When you add the blue collar work ethic and unwavering intensity on top of that, White's comparison really makes a lot of sense.

The worst case scenario for Thomas is that she ends up being a 6'2" rebounder who can score hustle points if she never overcomes her shooting limitation - at 6'2", it's reasonable to think she'll put up numbers better than Christmas did last year (and Christmas' impact was probably a bit underrated by some). The best case? An all-star power forward who does a little bit of everything for her team. Let's not forget that Catchings has been a perennial MVP candidate despite her low scoring efficiency in many seasons.

Ultimately, the issue becomes how you justify passing on a talent like Thomas. Answering "Chiney Ogwumike" and "Odyssey Sims" might be reasonable; answering "she has a broken jumper" seems to place way too much weight on her weaknesses given her considerable strengths.