By all accounts, Kayla McBride's WNBA draft stock has risen after Notre Dame's impressive run in the 2014 NCAA Tournament. But how good will she be and what does that mean for how high she should be drafted?

Right now, all signs point to the Tulsa Shock selecting Odyssey Sims with the second pick in the 2014 WNBA draft, leaving the San Antonio Stars with an interesting set of choices at the third pick.

Although the assumption for most of the season has been that Alyssa Thomas would clearly be the next best player left on the board, there has been at least some talk linking Stefanie Dolson to the Stars and, throughout the national championship game, Notre Dame's Kayla McBride was repeatedly called a "top three pick".

There's certainly nothing totally unreasonable about the Stars selecting McBride with the third pick, but was it over the top to think that she has definitely risen to the third best prospect before the consensus top two?

The answer to that question might lie in how much upside you believe a player who thrives on mid-range jumpers can become.

Although most of the attention directed toward McBride focuses on her outstanding shooting ability, her biggest and most impressive improvement from junior to senior year might have been her ball handling efficiency. Adding to that point, she was actually more efficient during ACC conference play than she was for the season overall. Just to pile on since you probably haven't heard, the fact that she became a more efficient ball handler despite needing to take on even larger responsibility for ball handling duties with the departure of star guard Skylar Diggins is even more promising.

During conference play, McBride had a pure point rating of 2.47 that would make a number of point guard prospects in this draft jealous. But to fully appreciate those efficiency numbers, it's important to know that she accomplished that while also just doing more than she had been previously - an easy way to weed out draft prospects is to look for players who got less efficient when asked to do more; McBride got better when her team required more of her.

Something else I'm not sure she's given enough credit for is her rebounding ability: she had an offensive rebounding percentage of 6.2% last season - outstanding for a guard - and was at about 5% for most of this season, perhaps moreso a result of having to handle the ball a bit more often than any critique of her effort.

Of course, she got better on the scoring front during conference play as well, hitting 52% of her 2-point attempts despite hitting a bit of a slump from the three point line. Overall, a 49% 2-point percentage and 3-point percentage of 36.4% at a usage rate just over 28% makes her easily one of the most efficient draft prospects at shooting guard in years - you hate to use hyperbole like saying a "once-in-a-generation" guard, but at the very least that combination of numbers give her a strong case as the best scorer to enter the draft at least in the last six years and the best wing scorer since Maya Moore (whose numbers are just untouchable).

She's that efficient a scorer ... from the field.

Unlike some other players, you wouldn't look at McBride's shot and say there's a mechanical fix or poor decision-making that explains the problem. It's really just a simple fact of playing basketball: occasionally, jump shots just don't fall, even if you're as prolific at it as McBride is. 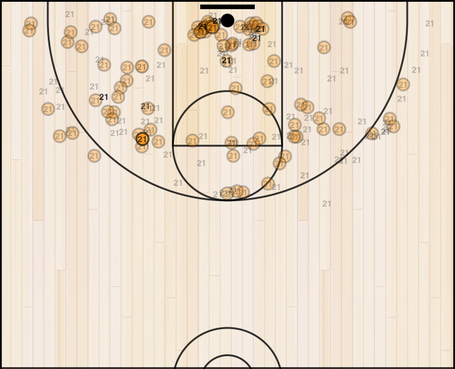 Shot chart for Kayla McBride from a selection of 13 Notre Dame games in 2013-14.

The shot chart app that I selected for this shot charting project along with the guys at Rocky Top Talk didn't have a feature to break down the numbers by area, but two things really stand out about, which are represented well on the chart: first, McBride shoots under a quarter of her shots from beyond the three point arc in contrast to many of the guards in this draft who are at 40% or more, reflecting McBride's comfort with scoring just about anywhere.

Second, it's hard to say too much about this without shot location numbers, but one thing that really stood out about McBride watching her this season is that she's not a righty who skews toward the right side of the court with her scoring opportunities - in the vast majority of the games I watched, the fact that she took so many shots going to her left in the mid-range (whether off screens or off the dribble) was actually sort of disconcerting compared to most other guards in college basketball.

Anyway, you can see in the shot chart that McBride really does rely on the mid-range jumper quite a bit, but the fact that she scores so efficiently from that area actually negates whatever concern there might be about her low free throw production (which normally reflects exactly that heavy reliance on a jumper that we see from McBride).

So yeah, the weakness isn't really a weakness. And when she's not hitting shot, she's so good as a facilitator and rebounder as a guard that she doesn't just disappear from games.

When I put up a draft board a few weeks ago, I had McBride as the first player outside the elite three of Ogwumike, Sims, and Thomas but the reality is that McBride really belongs in that elite prospect group when you start comparing her statistical profile to prospects of the past - the only decision was really whether to put Ogwumike and Sims in an elite class of their own or group them with McBride and Thomas.

In short, this four-player elite in this draft is very likely fail-proof though all of them have varying levels of weaknesses.

The inadequacy of WNBA comparisons brought me back to the glory days of one of my favorite NBA players: Ray Allen, whose stunningly consistent shot is a work of art and ball handling ability allowed him to handle ball handling duties for stretches in his career. That's quite a lofty comparison - and possibly a truly ridiculous upside - but finding a ceiling for McBride after the season she had is extremely difficult. 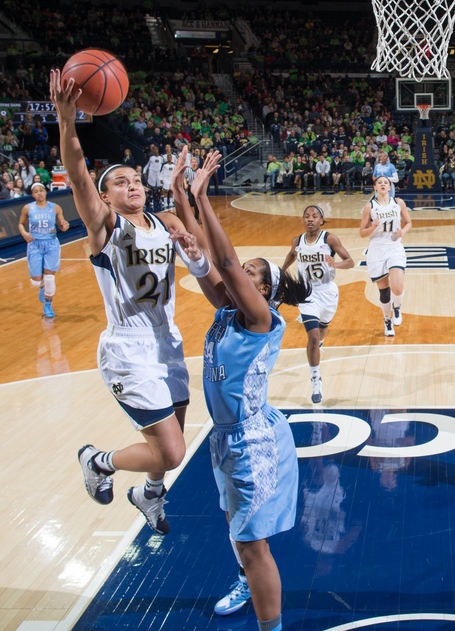 More of our coverage of McBride from throughout the season (and one worthy blast from the past):

Kayla McBride: A star in her own right

But going back to the question of McBride being a candidate for the third pick, the question really comes down to what you need: if shooting and ball handling is what a team needs, McBride is probably a good fit; if rebounding and versatility in frontcourt is something a team could use, Thomas makes sense.

For San Antonio in particular, part of the reason why Thomas makes so much sense is that they've had a rather long-standing rebounding problem - especially offensive rebounding - that Thomas would go a long way to ameliorating. Their shooting efficiency struggles from last season are a bit exaggerated by the fact that they were missing key parts of their rotation in both Becky Hammon and Sophia Young. McBride would certainly make for a fun future backcourt with Danielle Robinson, but - barring trade - that would give them a loaded perimeter rotation with a frontcourt that still struggles to win the rebounding battle.

Either way, there's little-to-no question that selecting McBride third wouldn't be a massive reach or indefensible decision. And if any team in the league plays similar to Notre Dame offensively, it's probably San Antonio (both Spurs and Stars) - McBride would fit that philosophy well.

It's the type of decision that might make fans ask "what if" years from now regardless of who the selection is, but without being able to see the future it's hard to go wrong with either.