Louisville's Shoni Schimmel will certainly be drafted by a WNBA team in Monday's draft, but if she makes a roster and succeeds she'll be a somewhat unique case.

Share All sharing options for: 2014 WNBA draft prospect profile: Why Shoni Schimmel's pro potential is so difficult to project

If forced to choose one game for someone to watch to get a sense of Shoni Schimmel's WNBA potential, it would be her season-high 31-point performance in Louisville's 76-73 loss to Maryland in the 2014 NCAA Tournament's Elite Eight.

After hitting her first three shots en route to an efficient 14 points in the first half on 5-for-9 shooting, the second half was a bit more difficult as described by Todd Carton of SB Nation's Testudo Times after the game. Yet Schimmel was not to be denied a final moment in the spotlight, scoring three threes in the final minute of the game as described in detail by Indian Country Today Media Network after the game. It was a perfectly executed final play that would've added another moment of brilliance to a career that already had its fair share had Schimmel's shot gone down.

There's an element of style over substance there or at least a need to dig a bit beneath the surface of her 31 points to understand the weight of a 12-for-29 shooting performance. But it perfectly captures why she draws the type of crowds that many women's basketball programs can only fantasize about: Shoni Schimmel is at once one of the most entertaining, explosive, and unpredictable players in the nation, which makes her easily one of the most intriguing prospects for the 2014 WNBA draft and among the most difficult to figure out.

Schimmel's performance against Maryland in the 2014 Elite Eight (via Reina Estimo).

Schimmel is known for her three point shooting prowess - especially after winning the women's and overall three point championship prior to the men's Final Four in Dallas this year - but what she probably deserves most credit for is her ability to shoot those threes with such ease off the dribble, not to mention the consistency of form.

What's more: she's shown signs of improvement over the course of her career, shooting a career-high 37.6% from beyond the arc this season on a career-high 314 three point attempts. Few players can even create the types of shots she takes, much less make them - unlike some of the other three point shooting prospects in this draft, Schimmel gets those shots off a combination of spots-ups, pull-ups off the dribble, coming off screens, and a few feet beyond the arc. Not only can that be exciting to watch, but it's also the kind of scoring ability that always seems to give her team a chance to stay in the game.

More impressive volume shooting style is that she turns the ball over so infrequently, down from a turnover ratio of 16% last season to 11% this season - although she doesn't exactly project as a WNBA point guard, her pure point rating of -0.31 at a 27% usage rate is an impressive efficiency as a ball handler.

Her ability as both a playmaker and scorer can make her difficult to defend, even when she's not hitting shots.

However, hitting shots - especially inside the arc - is where the challenge comes in projecting Schimmel's value as a WNBA prospect.

In spite of Schimmel's impressive scoring ability, her shot selection and efficiency might be a problem as a WNBA prospect. 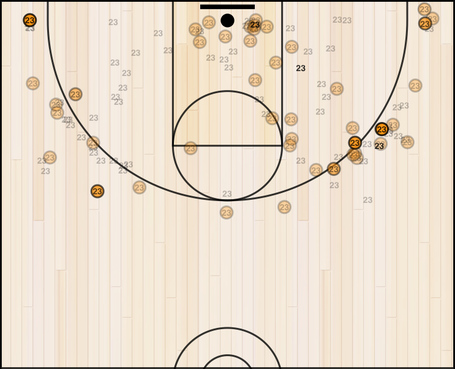 Shoni Schimmel's shot chart for seven games during the 2013-14 season.

What you see above is a shot chart taken for Shoni Schimmel over seven games this season: including three against UConn, Louisville's Elite Eight game against Maryland, and the February 23 game against Rutgers. While admittedly a small sample size, it actually turns out to be relatively representative of her season by the numbers.

Shooting numbers for Shoni Schimmel during the 2013-14 season.

Rather than the specifics of the percentages, the thing to really take away here is that Schimmel really struggles to score inside the arc - that's especially true from the left side of the court.

On the one hand, the analytics movement will tell you that mid-range shots are inefficient anyway so being a player who scores the majority of her points from beyond the three point arc and near the rim isn't all that bad. On the other hand, the fact that Schimmel shoots such a low percentage from two point range while shooting more than half of her shots from beyond the arc is a problem based on the performance of past prospects.

In fairness, Schimmel is also well-known for her passing ability and it's worth noting that she's better than many scorers of her caliber at driving and creating for others going left or right, even if she doesn't always get credited for an assist. But we can't just ignore what's there either when comparing Schimmel to past prospects.

Schimmel is very different than most players you'd consider "three point shooters", but the fact remains that college shooting guards who take that many threes just haven't made it in the WNBA during the 11-player roster era. For Schimmel, that's compounded by the fact that the track record for wings generally (shooting guards or small forwards) shooting under 45% is really poor for players not possessing elite athleticism.

The players who have made it in the league for more than a year (including the year they were drafted) with 2-point percentages as low as Schimmel's: Miami's Riquna Williams (41.73%) with Sugar Rodgers (39.73%) and Tierra Ruffin-Pratt (40.91%) having a shot at being the second and third in the last six drafts. Yet even with Rodgers and Ruffin-Pratt, their ability to get to the free throw line to score at a high rate (30.51% and 50.49%, respectively) was an asset; Schimmel's free throw rate of 18.98% is well below average for a wing prospect.

All of that makes it really difficult to project Schimmel as a WNBA player, despite her obvious strengths.

Riquna Williams does provide hope for Schimmel as a similarly inefficient scoring guard who did make the league. But in trying to use that as an optimistic comparison, we'd have to acknowledge that Williams is insanely athletic - Schimmel, in contrast, isn't likely to overwhelm WNBA defenders with athleticism.

Still, Williams did come up as a player with a similar profile when looking at SPI playing styles comparisons among an interesting cluster of similarities.

Similar prospects to Shoni Schimmel based on SPI style ratings for 2008-2013 prospects.

If you're wondering what on Earth those player's have in common, that's understandable. But remember this is a playing style comparison: all of these players are relatively high usage perimeter shooters whose ball handling ability allowed them to both score for themselves and pick up assists while creating scoring opportunities for others (in case you're wondering, Kayla McBride's rebounding ability is what separates her from this group). Despite being different in more ways than they're similar, the common thread makes for an interesting way to project's Schimmel's WNBA potential.

Again, the only player in this group of perimeter scorers with a 2-point percentage less than Schimmel's is Williams. But if we accept Williams as a unique case (and I submit that we should), Schimmel is significantly less efficient than the other seniors on this list (Prince left Rutgers after her junior season). When considering the struggles of players like Clarendon and Hill in their first seasons, that's probably a reason for concern. 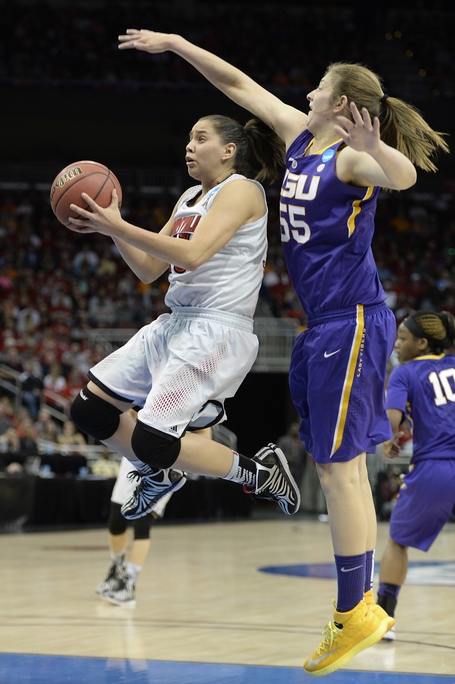 More analysis of Shoni Schimmel from throughout the 2013-14 season

Schimmel's struggles with scoring efficiency in her senior season

Schimmel has a strong case to become the best three point shooter drafted in the last seven years on Monday and that could be the thing that saves her from the fate of other similarly inefficient players. The question is whether that inefficiency from her college days will undermine her ability to perform at the next level - that's why Vanderbilt's Christina Foggie is included in the cluster above. Foggie is neither the prolific three point shooter nor the dynamic ball handler that Schimmel is, but she's a three point shooter (she shot 51.72% of her shots from beyond the arc this season) who's far more efficient than Schimmel. Although Foggie struggled against quicker defenders, it seems that teams considering players like Schimmel, Tricia Liston, Maggie Lucas, or Meighan Simmons as "three point shooters" have to at least entertain someone like Foggie who's as good a spot up shooter as any of them.

But again, what really separates Schimmel from all the other potential three point shooters in this draft is her ball handling ability. And that's why the close similarity to Kristi Toliver based on Schimmel's junior year numbers is interesting, if not very exact. Although Toliver played point guard in college - and had a higher assist ratio to show for it - she has made a name for herself as easily one of the top five three point shooters in the WNBA, if not the best. What happened this year to skew Schimmel's numbers away from Toliver is that her rebounding numbers went up a bit, she shot about 80 more shots this season, and her steals went down about a third - those could be considered peripheral concerns when trying to figure out where Schimmel fits in the league.

On the bright side, Schimmel is a ball handler with range who's capable of shooting off the dribble. That skill probably makes Tayler Hill as the most similar prospect with Toliver's career perhaps offering a best case upside scenario - it's noteworthy that both of those players struggled mightily in their transition from college to pro, despite showing flashes of scoring ability. Where Schimmel might diverge in the comparison to the other two is that whereas they have both ended up being players who operate more effectively with the ball in their hands, she has spent plenty of time without the ball in her hands in college and is more comfortable shooting off screens and working off the ball.

It's not all that hard to imagine Schimmel excelling in a reserve role for a team that can use her ability to run off screens and hit transition threes, particularly if paired with perimeter players who can defend and set her up for shots offensively. When not being the focal point of opposing defenses, it's not hard to imagine Schimmel getting a lot more open shots and using that three point threat to space the floor. It's also not very difficult to imagine Schimmel struggling with the speed of the WNBA defenders and becoming even less efficient as a WNBA player like almost every guard prospect does. And unfortunately, inefficient three point specialists just haven't made it in the league in recent years.