Projecting a starring role for Bria Hartley in the WNBA is difficult statistically, but her combination of distributing and scoring efficiency could make her a big contributor as a combo guard in the right situation.

By almost any reasonable standard, Bria Hartley had an outstanding season.

She was part of UConn's six-player rotation that went undefeated this season and won a second consecutive championship. She earned herself All-America recognition.

And, of course, she bounced back to have that outstanding season after a really difficult junior season.

There has been so much written about Hartley's growth from her junior to senior year that I'm not going to bother rehashing it here. But highlighting the statistical improvements really helps to frame her strengths as a draft prospect.

Hartley's junior year slump was bad enough that we left her off of our preseason draft prospect watch list because her statistics were marginal, at best. 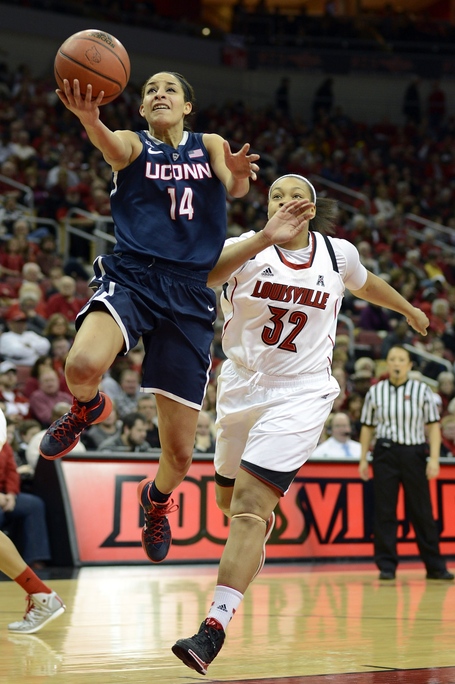 A look back on previous commentary on Hartley's season and pro potential:

The streakiness of UConn's Bria Hartley

Her 48.1% 2-point percentage was actually quite solid, but at a usage rate of 20%, shooting 49% of her shots from the 3-point line and having a pure point rating of 0.47 she wasn't a particularly strong WNBA prospect - as a 5-foot-8 guard, Hartley's numbers put her in an awkward tweener space of being too inefficient a distributor to play point guard and not quite dynamic enough a scorer to be considered a viable scoring guard. It wasn't that she was a "bad player", but far moreso that her statistical profile put her among a group of prospects historically that just haven't fared all that well.

That changed within the first few weeks of this season and, statistically-speaking, Hartley never really looked back.

As with many elite prospects in non-conference play, Hartley's numbers were astronomical in the first 10 games; unlike many, they remained strong even as the season wore on. She finished with a 2-point percentage well above the threshold for a successful WNBA prospect (54.6%) and a pure point rating of 2.40 - those numbers are far better than a number of successful point guard prospects just in the last year, possibly better than some that will make rosters this year.

Those senior year numbers put Hartley on the positive side of the sometimes-dreaded "combo guard" label, but she still has a major red flag in her profile.

Despite other improvements, the heavy reliance on perimeter shooting was still a bit of a weakness in Hartley's profile: she shot 44.29% of her field goal attempts from beyond the 3-point arc this season and had a free throw production rate of 16.73%. What that normally reflects is a player that relies really heavily on jumpers, which might explain some of Hartley's streakiness: she shot just 31.4% from the field and 50% from the free throw line over U Conn's last five tournament games, according to the numbers at WBB State.

There are essentially three criteria for success for point guards, but those criteria were challenged in the 2013 draft which might bode well for a combo guard like Bria Hartley.

The league has started to lean toward scoring point guards much more heavily over the last few years. Nevertheless, it's still true that guards who aren't either efficient distributors or high usage scorers struggle in the WNBA point guard role.

That's way too small a sample size to make any general claims about Hartley as a player, but if you're looking for potential weaknesses one might be that she'll struggle to score in an offense that isn't setting her up for shots consistently. And that leads to another point that makes it more difficult to evaluate Hartley as a prospect than people are giving it credit for.

While putting up great statistics, every time I watched her she didn't look all that spectacular. There were two reasons for that, which ultimately led me to seek out Synergy Sports data to see if I was seeing things right:

1. It seemed like she was doing the majority of her scoring in transition: Synergy bears this one out: a third of Hartley's scoring attempts came from transition baskets. Those weren't all uncontested layups - she is a very good jump shooter in transition - but there are a lot of plays where she's scoring relatively routine buckets in transition.

2. She didn't seem to be creating many of her scoring opportunities in non-transition situations: The rate at which she shot threes alone suggests a number of assisted spot up jumpers, but it seemed like she wasn't doing much to create shots off the dribble against a set defense.

Both of those observations would explain a low free throw rate as a player who was shooting the ball in situations when there wasn't likely to be a defender near her to commit a foul - that could be used as a proxy for a player's ability to attack the basket rather than settling for jumpers. But the Synergy Sports possession data adds a little weight to that claim.

The fact that she scores the majority of her points going right, tempers the strength of her scoring efficiency even further. But the point here is that Hartley got the majority of her scoring opportunities in the open court or by playing off others rather than creating a lot of shots for herself, which is what the high three point rate and low free throw rate suggested.

There are two perfectly reasonable - and not even mutually exclusive - ways to look at these numbers: the pessimistic way to look at this is that Hartley's amazing efficiency numbers were more a function of playing in a system with outstanding teammates who put her in excellent position to score, which have inflated her numbers. The more optimistic perspective is that UConn's style of play simply doesn't lend itself to a lot of individual, isolation plays and Hartley did take advantage of the opportunities she got within the offense - the fact that she doesn't get to the free throw line very much is really a function of the fact that she has the ball in her hands in driving situations so infrequently.

Either way, the low free throw rate thing is becoming less and less of a red flag with the more players I look at over the years, but in this case it did somewhat reflect what I assumed it did; all that said, Hartley might just end up being another case that disproves this so-called rule.

So I'm going to stop there with the critique of the numbers because I've had similar questions about far less efficient guards who score a lot in transition and they've worked out fine.

What we really don't know is how much those numbers matter: scoring guards are just all over the map in terms of how they score and we're going to learn a bit about Hartley. And unfortunately, I'm not sure how much looking at her SPI similarity ratings really matter - finding another high usage college scoring guard as efficient as Hartley has just proven to be really difficult, regardless of whether that be a function of UConn's system.

Nevertheless, there might be an interesting point to take from Hartley's closest similarities.

Similar prospects to Bria Hartley based on SPI style ratings for 2008-2013 prospects.

The first thing that should really stand out about these similarities is almost all of them played exclusively point guard in their college careers, though they were also generally high usage point guards at varying levels of efficiency. And if you were to just look at these players on paper and compare them independent of position, Hartley probably looks like the best of the bunch - a case could be made for either Prahalis or Robinson based on those numbers, but the bottom line is that Hartley's numbers are favorable when compared to players who played point guard full-time in college and earned starts at point guard during their rookie seasons. The fact that the considerably less efficient Bentley had an All-Rookie season last year despite perhaps having a similar question mark about functioning outside an uptempo system, might be encouraging for Hartley especially for any teams interested in pushing the tempo.

Otherwise, the only comparison that really stood out was Sydney Carter, particularly because the only thing really separating her and Hartley was their interior tendencies and I didn't recall Carter being that much more of a rebounder or shot blocker (what that's based upon) than Hartley. As it turns out, she really isn't: the fact that she had a much lower assist ratio, skewed things so that it inflated her interior ratings a bit. But otherwise, Carter probably really is the most similar prospect to Hartley since 2008 and I don't think I'll be offending any Aggies fans by saying Hartley is a considerably better prospect than Carter.

Still, all of this doesn't make projecting a WNBA role for Hartley any easier - based on how she thrived and put up some outstanding numbers at UConn, she's best playing off the ball; at 5'8", playing point guard is probably the best path for success for Hartley and she compares favorably to a number of other recent All-Rookie point guard prospects. That puts Hartley squarely in "combo guard" territory, which is sometimes a dismissive label but might just represent a valuable piece off the bench to play either spot in the right situation.