Over the course of the 2013-14 NCAA season, we've been watching a set of 10 WNBA prospects closely. With the draft just a few days away, we'll be taking a closer look at a few of them. Just to establish a structure, I'll begin with a profile of WNBA draft green room invitee Meighan Simmons with the help of our friends from Rocky Top Talk and a shot chart analysis we undertook during the season

When you spend three years earning a reputation as an inefficient volume shooter, it can be really hard to change people's perceptions.

But to understand Meighan Simmons' value as a draft prospect, you really have to begin by putting the past to rest and focusing on the numbers she has put up in her senior year.

She still had her moments of questionable decision-making this season and her last impression probably wasn't the best - she shot just 30% from the field during Tennessee's final six games in the SEC and NCAA tournaments. Yet what can't be overlooked is that she has actually gone from being an erratic shot-taker to reasonably efficient shot-maker in large part because she has been a bit more selective inside the arc.

To take a more nuanced look at Simmons' shot selection, David Hooper and Chris Pendley of Rocky Top Talk took the lead on a project to look more closely at her shot selection during conference play by charting her shots using a mobile shot charting app (credit to Hooper and Pendley who did the majority of the work on this project). Naturally, there are some inaccuracies from trying to chart off a television broadcast, but taken as a whole we were able to make some interesting observations about Simmons and perhaps her pro potential. 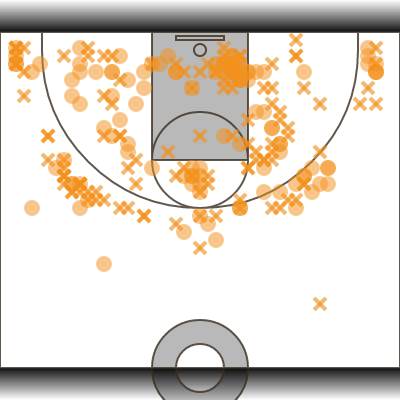 In summarizing his observations from the shot tracking process, Hooper wrote in an email exchange that, "During the shot tracking, she was pretty much taking exactly the shots they let her take. Her reliability is as good as the shot selection itself. The real question is whether she'll be able to find enough of the high percentage shots in the WNBA to maintain her ability to score."

That sums things up pretty well, but let's add some statistical support for what she did there.

The thing that ended up being most striking about that shot chart was the distribution across the court because of how she began: through the first six games of conference play, she took exactly four shots between the left lane line and the left side of the arc. Although it didn't quite match what you see from watching Simmons, it was looking like she was a heavily right-hand dominant player. But as you can see from the chart above, she ended up showing the ability to get shots from everywhere.

And that ability to create shots herself is an asset as you try to project her pro potential, even accounting for the high ratio of mid-range shots: at the rate she was making those shots, her ability to get them at such a high rate is a major asset.

For a WNBA wing prospect, the target number you're looking for is a 2-point percentage of about 45% at minimum. Not only does Simmons have that for the season, but she was significantly better than that during conference play. That might be tempered by the fact that her 2-point percentage dropped to just 32.43% in those final six games - which you could either dismiss as a small sample size or confirmation of your pre-existing beliefs about Simmons - but it's worth noting that the SEC was arguably the best defensive conference in the nation this season and she did a

Although It's sort of hard to know how much to read into that discrepancy between conference play and the rest of the season period of the season, the numbers don't support the notion that Simmons is a terribly inefficient volume scorer - it's pretty clear that Simmons is a dangerous, if streaky, scorer who's more than capable of getting shots that she can make.

Those jumpers that have had a tendency to drive women's basketball fans insane were actually falling quite a bit this season and that's a positive sign for her future development.

To Hooper's point about being able to find those shots against WNBA competition, the fact that she gets so many of these shots off the dribble - against intense defensive pressure - bodes well for her ability to continue growing into a reliable pro scorer in spurts, especially in the role of a complementary player who isn't her team's primary perimeter scoring option.

"She's good at driving hard, pulling up to a fully vertical jump, and getting a good stroke on the shot," wrote Hooper. "That may be the difference between her succeeding and failing at the next level - knowing when to keep driving for the layup and when to concede the layup and go for the jump shot. If a team can design some passes for her as another option from the dribble drive, then, she can probably shake defenses loose whether or not she's scoring."

To the point about her right-handedness, Simmons does have a noticeable tendency to pull-up more quickly or pass after taking a few dribbles to the left, but she's not a player who plays as though her left hand is allergic to the ball. The fact that she can shoot threes off the dribble so proficiently is a skill that so few WNBA players have that a team looking for scoring punch from beyond the arc might consider her 36% three point percentage an additional plus.

As something of more subtle importance, the fact that Simmons' three point rate went down is a major plus - as described previously about wing prospects, players who shoot upwards of 40% of their shots from the three point line and have below average free throw production rates (under 23%) haven't fared well in the league. Simmons' three point rate this season was exactly 40.98% and her free throw production rate (FTM/FTA) was 20.28% - it's almost as if she's just deliberately teasing history. Unfortunately, her numbers during that conference play period weren't much more encouraging.

The theory would be that a player with those type of numbers is more of a spot up shooter who relies heavily on teammates setting her up for jumpers and struggles to create shots off the dribble where they'd get a higher rate of free throws. Whether it be due to a lack of athleticism or a lack of handles, it's a bit of a red flag. Of course, that flag is blown away by the fact that both 2013 WNBA Finals MVP Maya Moore (UConn, 2011) and 2013 Sixth Woman of the Year Riquna Williams (Miami, 2012) had below average college free throw production rates - if you can get the jumpers as easily as those two did, these numbers might simply not matter as much especially when the shots are falling.

Simmons does get a fair number of her layups in transition - adding to the concern that she might struggle to get high percentage shots at the rim in a halfcourt offense - but the ability to hit the jumpers defenses give her at this rate really mitigates any concern about her ability to score at the next level.

Simmons is a rather inefficient ball handler with a pure point rating of -4.03 that could very well be her undoing, but that's better explained by a relatively low assist ratio than a high turnover ratio for a volume scorer which mitigates that a bit.

Nevertheless, the very fact of being a pure scorer - a player whose primary contribution is scoring on the SPI playing styles framework - has been a bit of a red flag in the past. It's not that players can't overcome being a pure scorer, but moreso that if they find it more challenging to score against WNBA competition - not an unreasonable challenge - they might not be able to offer a team much else.

In recent memory (since 2008), the only two pure scorers to really succeed in the league are Williams and Allison Hightower (2010). Although Hightower was able to turn her defensive and ball handling ability into an asset to the Connecticut Sun when she struggled to score early on, Williams just gets her shot so easily - if inefficiently in college - that she has been able to make a similar impact in the WNBA.

Finding a positive direct WNBA comparison for Simmons is somewhat difficult, but we might be able to extract some optimism out of the Williams example given her athleticism, shooting tendencies and style of play.

Similar prospects to Meighan Simmons based on SPI style ratings for 2008-2013 prospects.

To the point about pure scorers struggling to make the transition to the pros, Simmons' scoring tendencies put her in the 99th percentile of all prospects from 2008-2012 (400+ players) and as such she would have the highest scoring tendencies of any player in the league should she make a roster. 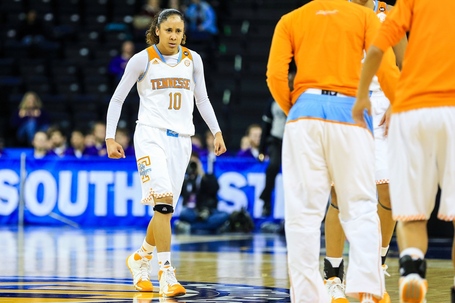 A combination of analysis from Rocky Top Talk and Swish Appeal about Meighan Simmons:

Meighan Simmons stood out in Tennessee's loss to Notre Dame

The explanation for that is not that other players haven't scored more or had higher usage rates, but that other players have done more outside of scoring - as reflected in the numbers above, both Hightower and Williams picked up steals about twice as often as Simmons and both used their athleticism to help their teams on the boards far more often. So that's (maybe) where we can find an optimistic projection for Simmons: optimistically, it's not hard to imagine her using her speed and scoring ability in transition to give an uptempo team some scoring punch as a reserve, if not necessarily a Sixth Woman of the Year candidate.

However, it's also not very hard to see where Simmons might exist more on the fringes of a rotation/roster as so many other pure scorers have done in the past. In addition to the higher steal rates, both Hightower and Williams were much more efficient ball handlers in college than Simmons - that has served Hightower quite well in finding a WNBA niche. Similarly for Simmons, it might help her if she could fill minutes in a ball handler's role, but the numbers suggest that's less than ideal for her.

With her numbers across the board so much closer to Italee Lucas than the more positive outcomes, it might be easier to take the more pessimistic view that she simply won't make it. But the fact that she's a little taller and that those numbers from conference play are so strong really help - if she finds a team that will give her a little freedom to create off the bench, she could easily end up being a contributor in the league.