BYU's Jennifer Hamson wins WCC Player of the Year awards: Can she make it in the WNBA?

The WCC announced today that BYU senior Jennifer Hamson has been voted both WCC Player of the Year and WCC Defensive Player of the Year, becoming the first player in league history to do so. So with her dominance in the WCC, does she have a shot at the WNBA?

Share All sharing options for: BYU's Jennifer Hamson wins WCC Player of the Year awards: Can she make it in the WNBA?

In BYU's regular season finale against San Diego on Saturday, 6-foot-7 center Jennifer Hamson did something that you will neither see happen very often nor appear in the box score.

As San Diego's 6-foot-3 Sophie Ederaine got by defender Morgan Bailey to make a sweeping move to the right side of the rim off an offensive rebound less than two minutes into the game, Hamson rotated over from under the rim to block her shot. The errant shot flew right into the hands of San Diego's Kameron Knutson about five feet outside of the key on the baseline, where she was able to quickly set her feet and get into her shooting motion while Hamson turned her body and managed to contest the shot.

Knutson did ultimately make the shot, but Hamson showed what has made her such an outstanding shot blocker on that sequence: to get from under the basket behind the player she blocked to five feet outside the key to the next shooter shows remarkable agility, instincts, and lateral quickness independent of her insane wingspan.

BYU's feature on Jennifer Hamson's decision to focus on basketball instead of volleyball this season (via BYUtv Sports).

Hamson didn't win the WCC's 2014 WCC Defensive Player of the Year award today merely because she's tall - the ability to get off the ground quickly that she brings from her All-American volleyball career makes her an elite shot blocker and absolutely dominant not only "in the paint" but also anywhere within a 10-foot radius of the basket. Similarly in BYU's win in San Francisco on February 8, Hamson was not merely standing in the paint and blocking close range shots, but rotating to block short jumpers as Dons guards refused to be intimidated. In that game, it looked like she was actually going to get that triple-double as she had 6 blocks within the first few minutes and finished with 8, leaving her just two blocks short of a triple-double.

Averaging a nation-high 4.2 blocks per game during the season, BYU's star player averaged 5 per game during the final six-game stretch between the game at USF and Saturday's senior day game against San Diego. Her nation-leading blocks in addition to being top two in the conference in scoring (18.5 PPG), rebounds (11.4 RPG) and tops in field goal percentage (56.8%) also made her the easy choice for WCC Player of the Year.

So now people are naturally asking what's next?

Jay Drew of the Salt Lake Tribune reported last week that Hamson is in fact drawing interest from WNBA scouts despite her intention to finish her All-American volleyball career from August to December, making it unclear whether or how much she'd play in a rookie year in the WNBA.

Hamson has made so many leaps and bounds on the basketball court that some WNBA teams, scouts and agents have taken notice.

"I have had a lot of agents and a couple scouts call me about her," BYU coach Jeff Judkins said last week. "I definitely think she has a good shot at getting drafted, maybe in the first round. She's one of the best big players in the country right now."

Yet what makes Hamson an especially interesting case study as a prospect is that her elite shot blocking ability is undeniably her biggest strength - that's a strength that makes her statistical profile particularly hard to read.

Setting aside any adjustments that need to be made for mid-major prospects (for now), former ESPN analyst John Hollinger noted in describing his NBA draft rater that prospects over 7'0" "greatly underperform their college stats in the pros" in part because "...they sure as heck weren't facing off against many players their own size." Obviously, women's college basketball doesn't have seven footers to offer, so James Bowman made an adjustment for women's basketball players with 6-foot-6 being the red flag threshold. Hamson sort of embodies the point at times.

The nation's leading shot blocker won her second consecutive WCC Player of the Week award after coming two blocks short of a triple-double at the University of San Francisco in BYU's win on Saturday.

The past six years have been cruel to mid-major women's basketball players trying to make the WNBA. So we wonder, what makes a successful mid-major WNBA draft prospect?

It's true that she's an efficient scorer, but as someone who takes the majority of her shots right around the basket as the tallest player on the floor, her field goal percentage of 56.4% is not necessarily outstanding compared to past WNBA center prospects. She misses a number of shots right around the basket that can't really be considered contested given her wingspan. Her true shooting percentage of 61.9% is greatly aided by her ability to get to the free throw line and make free throws (72.3%). And in a recent game at San Francisco, USF was surprisingly effective at pushing Hamson out of position in the post with a combination of players under 6'3".

Hamson's rebounding rate - offensive and defensive - is also impressive, but that again is where the very fact of being tall helps Hamson considerably: she often looks to out-jump opponents rather than angling for position early or boxing out on defense. Again against USF, there were a couple of plays when even 5-foot-7 guard Alexa Hardick was able to box out Hamson successfully.

But her shot blocking ability holds up even under such scrutiny due to the agility she has shown throughout the course of this season - she has used her physical tools to become an outstanding weakside shot blocker. What's remaining as important for Hamson then is a question that I've always found interested since hearing one GM say that they were going to draft specifically for shot blocking: how well does shot blocking as a skill transfer to the pros?

What is the value of shot blocking as a skill?

Plenty of people have asked this question about shot blocking for men's college basketball and the NBA so I'll summarize here and link you elsewhere for more on that:

The big takeaway from all those studies is this: amassing a bunch of blocked shots doesn't mean those blocks were valuable. As noted at Growing up 516 - and this is an important thing to note - a player's number of blocked shots is not equivalent to "defensive ability". Last, as noted by both Lyu and 82 Games, the location of a block matters - layups, for example, are easier to block than dunks, which has obvious implications for a 6-foot-7 shot blocker in women's college basketball.

So like most defensive statistics, blocked shots really don't tell us all that much on their own, even before figuring out what it means for a player's potential ability at the next level. But if we want to measure a player's shot blocking ability - rather than just how many times they've blocked someone, which is really based on how many minutes they play - using block percentage is the way to go. Thankfully, I have the numbers from 2010 and WBB State has block percentage numbers dating back to 2011, defining it as follows:

An estimate of the percentage of blocks a player registered while on the floor. Formula: (BLK * (TeamMin / 5)) / (Min * (OppFGA - OppThreePA))

But with some target data in mind, we can look more closely at how the strongest shot blockers in past drafts have fared.

How have shot blocking prospects fared in the WNBA?

Sticking with the (very, very loose) statistical comparison to Griner as a shot blocker, last year's draft was one of the best for shot blockers in recent memory and not only due to the presence of the top pick: seven players from the top 50 seniors in block percentage, according to WBB State, were drafted. All four of the first round draft picks (Brittney Griner, Phoenix Mercury; Elena Delle Donne, Chicago Sky; Toni Young, Oklahoma State; Kayla Alexander, San Antonio Stars) made rosters and two (Delle Donne and Griner) were all-stars. One more player (Joslyn Tinkle, Seattle Storm) appeared on a roster during the regular season. However, looking further back we see that 2013 is a bit abnormal.

What makes for a successful WNBA center prospect? 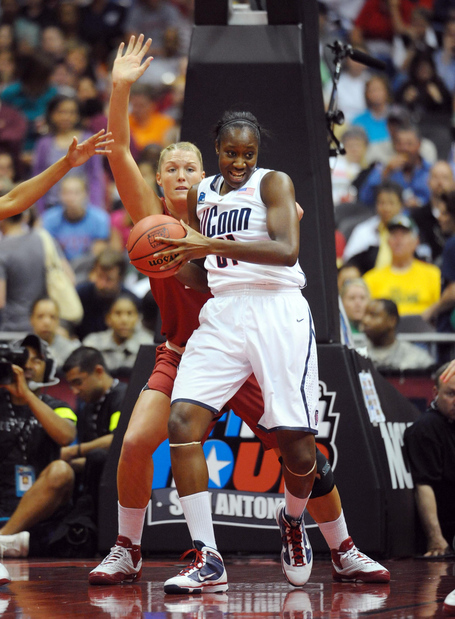 Back in 2011, we looked at a set of 36 NCAA DI center prospects to figure out some basic criteria for what leads to WNBA success. This is an update.

In 2012, just three of the top 50 were drafted and only one (Sasha Goodlett, Indiana Fever) made a roster with undrafted Avery Warley catching on with the Phoenix Mercury. In 2011, eight of the top 50 were drafted, two were drafted in the first round (Amber Harris, Minnesota Lynx; Victoria Dunlap, Washington Mystics) but the three second round picks (Jessica Breland, Lynx traded to New York; Danielle Adams, Stars; Carolyn Swords, Sky) have made a much bigger impact. In 2010, four strong shot blockers were drafted (Tina Charles, Connecticut Sun; Jayne Appel, Stars; Jacinta Monroe, Mystics; Jenna Smith, Mystics) and, perhaps needless to say, the results were mixed.

To underscore that point about successful players, Charles' true shooting percentage of 66% is still the best of any post prospect drafted in the first round in the last four drafts. Swords' insane true shooting percentage of 73.9% is the best of any player in the last four drafts. As it happens, Swords is also the only one listed at 6-foot-6 who has even been drafted from the top 50 seniors of her draft year, but shot blocking (3.8%) was clearly not her most significant strength as well as she scored against ACC competition. And yet she has averaged just 9.8 minutes in her career but did play an important role on the Sky prior to a season-ending injury.

Most of all, not being a shot blocker isn't the end of the world for a post prospect: 2013 All-Stars Nneka Ogwumike and Glory Johnson were not among the top 50 seniors in their draft year despite elite athleticism and 2013 All-Rookie selection Kelsey Bone didn't rank in the top 600 in the nation overall during her final season.

So what does this mean for Hamson?

Hamson's unique in that she is a better shot blocker than anyone who has been drafted since 2010. Since her numbers are outstanding, the next question has to be how much being a mid-major player will affect her chances. That's a subject for another post.

For more on WNBA prospects, check out our 2014 WNBA Draft prospect watch storystream.