The Atlanta Dream has re-signed center Erika de Souza to a contract. She has played for the franchise since its first season in 2008.

The Atlanta Dream re-signed de Souza by using the core player exception on her. Last season, she averaged 12.9 points, 9.9 rebounds, and 1.8 blocks per game, all career highs and helped get the Dream to the 2013 Finals. She also had the most double doubles (18) in the WNBA.

de Souza's 2013 performance earned her some league accolades as she also made her second WNBA All-Star team, and was named to the WNBA's All-Defensive Second Team.

Vote in our poll here.

Atlanta Dream Executive Vice President and General Manager Angela Taylor also had this to say about the move in the team's press release:

We are excited to have Erika back. Re-signing Erika was a priority this off-season because she is one of the best centers in the world and will be a key part of our championship efforts this year & in the future. Her veteran leadership, competitive nature, and passion for the game are valuable assets to the Atlanta Dream franchise.

de Souza, who hails from Rio de Janeiro, Brazil, also played for their Olympic Team in 2004 and 2012. In the 2012 Olympic Games, she averaged 16.2 points and 8.8 rebounds in pool play. With the Olympics being held in her hometown in 2016, I would imagine that she will do whatever she can to be on that team as well, even though she would be 34 by the time those games come around.

I actually happened to be in Brazil last week, and spent a number of days in São Paolo and Rio. Here's a picture I took of Copacabana Beach from the Pão de Açúcar (Sugarloaf Mountain), which is one of the major attractions there along with the Christ the Redeemer statue. 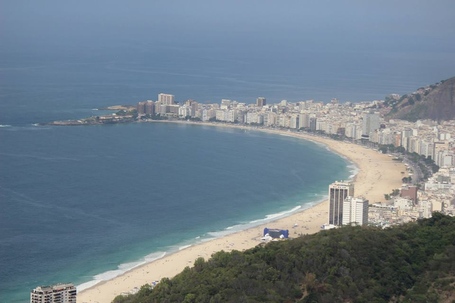 I love Rio. But I digress.

At any rate, re-signing de Souza helps keep the Dream's core intact, which also includes guard/forward Angel McCoughtry and forward Sancho Lyttle, who have helped the team win three of the last four Eastern Conference championships. Having all three back for 2014 should help keep this team in the picture for the East for some time to come.

With this move now in the books, I think that the Dream will try to add some more three point shooting power, and this has been a weakness for this team for quite some time. If Atlanta can add some more shooters to the roster, the Dream could once again win the East this summer.