Tennessee wins their version of “Dancing with the Stars”, claims SEC Championship

Kentucky coach Matthew Mitchell provided Tennessee with some "bulletin board material" for their 2014 SEC Tournament matchup without even saying a word.

Share All sharing options for: Tennessee wins their version of “Dancing with the Stars”, claims SEC Championship

Duluth, GA - There was a very unique photo hanging up on Tennessee's whiteboard to go along with their keys to game, a photo that was a very telling image of things to come.

It was a picture of a coach reveling with their players - it was a very euphoric display. The coach and players were celebrating what looked like winning a championship. The imagery of this picture was so telling, as there was only one depiction to come from it. It would be something that would definitely drive the Lady Vols to another level in their desire for the SEC Championship.

Many might be pondering, who was in the picture?

Maybe it was a picture of Pat Summitt winning her last SEC Championship in 2012?

What about Summitt with Candace Parker and crew when they won their last national championship in 2008?

Not that one either.

It was a picture of Kentucky coach Matthew Mitchell dancing on the chairs of the Lady Vols' locker room - after the Wildcats beat Tennessee earlier this regular season. Mitchell, who is known for his legendary dance steps at Midnight Madness, was doing the "Nae Nae" dance in the visitor's locker room.

Let's just say that it didn't go unnoticed by the Lady Vols, not at all.

The Nae Nae, for those unaware.

"I find that disrespectful," said 2014 SEC All-Tournament Team performer Cierra Burdick. "He's dancing on our chairs; he's doing the ‘Nae Nae' on our chairs. I took that as great disrespect, I think one of the greatest things about a rivalry is there's no love lost. And, there's no love lost in this rivalry - everyone knows that. I look at that picture - we got our redemption.

"They got us on our home court. But we were able to put the white (uniforms) back on, come out here in front of all our fans, and get the home win that they deserved."

Burdick's statement that it's a rivalry is not only true, but also goes further than what is on the court. This tension runs deep. Multiple sources have stated that when former Kentucky assistant, Kyra Elzy, took the same position at her alma mater, that Mitchell was the one that had her office packed.

All the underlying things aside, this game was great theater -- this game was about two teams competing to see who would get the ultimate prize of the SEC. Now onto Kentucky's dancing competition: Tennessee.

So who's the best dancer on the Lady Vols? 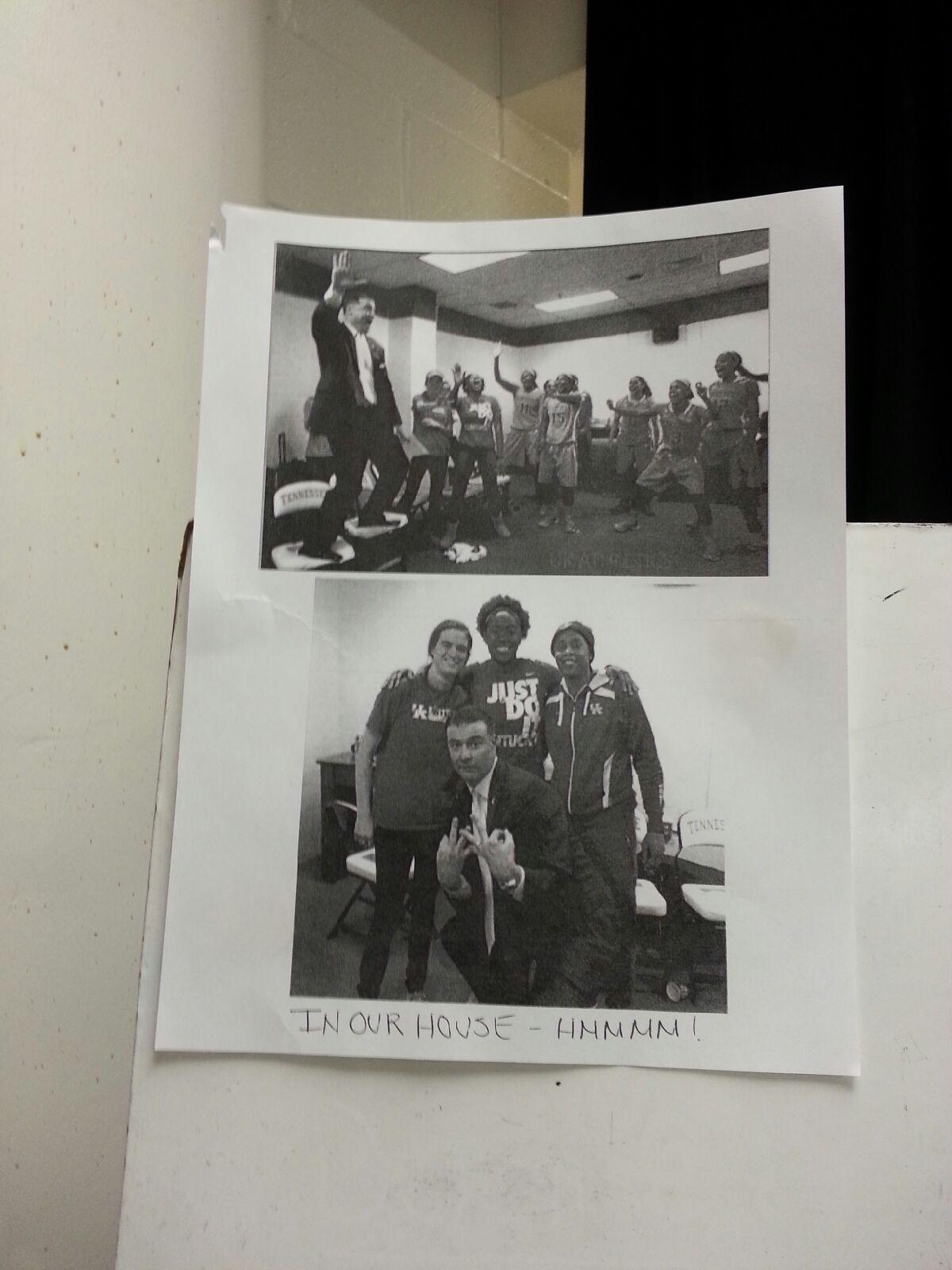 Two of the best dancers on the team, Harrison and Reynolds, danced like "stars" two days ago. What else can be said about Harrison, who was named SEC Tournament MVP, as she continued to showcase why she's arguably the best post player in the country right now.

"I think Izzy, we talk a lot about doing work in the off-season," said Tennessee coach Holly Warlick. "Izzy was injured last year, didn't play a lot as a freshman. This summer everybody stayed in school. Izzy went that extra mile, worked out with her brother. She put in the time. I think Izzy herself deserves a lot of credit because she's put in the work, she's battled.

Now onto the other, "Dancing with the Stars" participant, Reynolds. She put on such an anesthetic performance in the second half, as she constantly "waltzed" and pirouetted through the heart of the Wildcats defense. It was almost as if the basketball court was her dance floor as she played with such harmony - constantly doing things that caused her teammates, coaches and fans to erupt into a standing ovation.

It didn't matter if a play for her was choreographed or not, Reynolds continuously did moves that truly left many in the stands aghast. Whether it was a quick "ball change" or when she did the "free spin" at the top of the key, drove to the left, and pulled up for a 15-foot midrange jumper.

Or what about when she "side box stepped" Kentucky's Bria Gross, which led to layup and the foul, and thus resulted in tying the game at 59. Immediately she turned to the bench, to see their thoughts, and they gave her a resounding "10". From that point on, the young freshman played like a true wunderkind as she helped orchestrate the team to victory.

Does Tennessee deserve a #1 seed in the 2014 NCAA Tournament after winning the SEC championship?

Freshmen step up for Tennessee in SEC tournament

Andraya Carter and Jordan Reynolds stepped up for the Lady Vols in the SEC tournament.

And for an encore Reynolds "reverse turned" off a Graves ball screen, which led to a Harrison layup to tie the game with 2:25 remaining. Her moves were so aesthetically pleasing that Reynolds was the topic of discussion on Twitter - trending nationwide.

While the nation was talking about Reynolds as this newly discovered phenomenon, there were a plethora of people in Tennessee's camp who weren't caught off guard in the slightest - especially the coach who first saw her.

"So I go out to the End of the Trail tournament in Portland, Oregon," said Tennessee assistant Dean Lockwood. "(I'll) never forget...saw her play at a high school about four or five miles from the main site, I called Holly (Warlick) immediately after the game and said, ‘This is a kid that we must have.'

Who knows, maybe next year we will get the same cast going against each other for a sequel? Because this year's season finale in the SEC tournament was quite the epic dance off.

But Sunday afternoon, it was the Lady Vols who were crowned champion. And ironically, it was Tennessee that would "save their last SEC dance" as their best -- and be the ones to do the "Nae Nae."

For more on the conference's tournament, check out our 2014 SEC women's basketball tournament storystream.