The event is being held December 27th through the 30th in the recently-renovated DC Armory (still used as an active military facility which first opened in 1941). The Armory is used at times for numerous other civilian events including concerts and other sporting events.  For this event, the floor was configured to hold four courts next to each other.  On the off Sunday, there was a banquet where presentations were made helping to enrich the young ladies present in what Title IX stands for and how it has affected them.

While most of the 41 participating teams were from the District of Columbia, Maryland and Virginia, there was ample representation up and down the East Coast.  Only Sierra Canyon (of California) and Whitney Young (of Illinois) came from the West and Midwest regions.  College coaching attendance ranged from high majors down to division two's again primarily from the eastern (north and south) portion of the nation.

If you are involved with a high school that would like to combined some good basketball with on-site learning in the nation's capital, you may wish to consider participating in this event in future years.

Unfortunately, my travel schedule would not allow me to stay until the event ended. Thus I only highlight several of the top performances prior to the final and some players present that you may wish to note for present prep or future college fandom. Observations below concentrated on the top (Patsy Mink) bracket and the private schools in the Bob Headen Classic (New Hope Christian Academy and Potter's House Christian Academy mentions).

However, I would be remiss not to mention her as being in the tournament as she was considered the top uncommitted prospect present at the event by the scouts on coaches' row. In her first game in the event, she tallied 32 points in a lopsided 96-31 victory over TPLS Christian Academy of Midlothian, Virginia.

Burke is an impressive looking athlete with great size and perimeter game.  She played a lot of point guard in her team's loss (54-45, first of season) to McDonogh School where she tallied 21 points.  At UCLA, her next stop, she will probably play more on the wing for the guard-rich Bruins. She combines her above average athleticism with good court vision and basketball IQ.  She can score via drive (changing hands on attack) and shooting over the top.

Davis transferred into the program this fall.  When she was seen earlier this fall, her team lost twice in the Tennessee Turkey Jamm and the team was not at all on the same page. While NCA lost to Whitney Young 65-53, the locals looked considerably better (more together) than in Tennessee. As such, Davis distributed the ball well and scored 11 points herself using both drive and perimeter stroke.  Word in the gym was that she is getting mid-major looks.

Enabosi, committed to Delaware, has battled knee injuries for all too much of her career.  In scouting her, one might assume she's a lefty as she goes left so well.  When she gets to the foul line, you realize she isn't.  Enabosi plays hard, has a driving mentality and readily takes contact hoping for an "and one" trip to the foul line.  She finished with 15 points in the loss to Eleanor Roosevelt.

Goode is one of those "good motor" players who just keeps attacking.  In St, Anthony's 58-57 overtime win over Riverdale Baptist, Goode went to the basket as opportunities presented themselves.  When the dust finally settled on this contest, she had tallied a team leading 19 points for the game.

Grayson is a name that is becoming well known in BCS recruiting circles.  She is a fine athlete who has basketball understanding well beyond her years.  For her team in game one of the event, she ran the point showing a nice distributing ability.  She also can move to the wing going on attack mode. "Honesty," remember the name!

With the supply of uncommitted 2016 graduating class players capable of handling high major Division I point guard duties shrinking to a relative few, Lewis only continues to attract more interest from those still recruiting the position for 2016.  In the first half versus National Christian (NCA), Lewis hung out like a shooter in the wing to baseline area.  In half two, she changed gears taking the point going into distribute, drive to score or dish mode.  In the final tally versus NCA, Lewis finished with 28 points.  Along with Rellah Bothe, she was one of the two best underclass prospects at Title IX.

Logan, committed to the College of Charleston, came out on fire, tallying 13 points in the first half upset (54-45) win over Sierra Canyon.  She played with strong focus taking good shots (mostly mid-range in wing to baseline area).  In the second half she added eight to finish with 21 for the game.

When a player scores 27 points in a game, that's noteworthy, When it's a freshman, that's even more so.  McCalla's jersey number was incorrectly listed in the roster data and only a trip to the scorer's table showed that it was this young player doing the damage.

I cannot emphasize enough to high school and club basketball coaches to submit accurate rosters.  Yet this problem so common in club ball (where rosters are often in flux) should not occur with mid-season high school teams with only about a dozen players to account for.

McCalla has a sweet stroke and did most of her damage taking perimeter shots making several threes along the way. Coaches following this team will want to monitor this young player for the future.

In scouting players who I may only see year to year, I look for areas of improvement in the individual in question. Sometimes you find it and sometimes you don't. Niang, committed to North Carolina State, showed greater energy and movement with and without the ball than a year ago.  Above average athletically, she appears to be more key driver than face-up shooter. 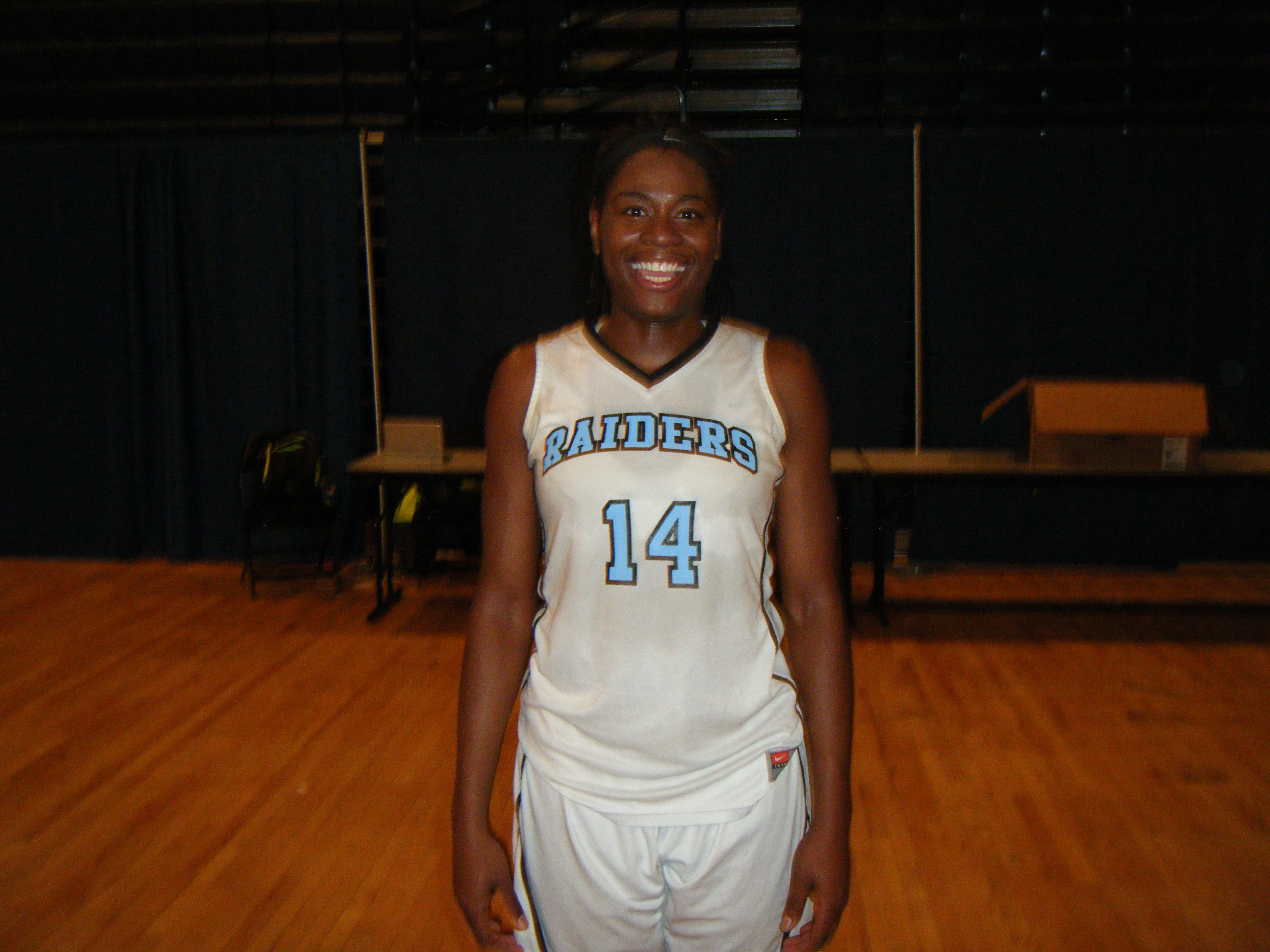 Before Roosevelt's game with Good Counsel, I was told to be on the lookout for this high energy undersized post.  Omokore, committed to UCF in Orlando, Florida, certainly fulfilled the description.  She doesn't take possessions off and battles for each rebound regardless of opposition size.  In helping her team to a 60-50 overtime win, she tallied 16 points and 22 rebounds.

From Denmark, Scheel came from her homeland just this fall in search of an American college scholarship. Already having a few schools eying her, a 14-point showing in helping her team come back in the second half to defeat (61-44) Life Center Academy probably increased her stock.  With a sturdy medium-solid build, she works the baseline with intelligence and can also spot up on the perimeter.