In light of the increased scrutiny of Alabama's women's basketball program, ex-Alabama women’s basketball player Brittany Jack shared her own experience with Kristy Curry and the Crimson Tide program with Swish Appeal.

I talked to one of my teammates yesterday who told me that Alabama wasn't allowing Daisha to play this year.

From my personal experience, I've been wanting to say something, but I needed an opportunity. I didn't want to come out and lay all of Alabama's stuff out, and they say, "Well she's just mad because she got released." I've graduated and I'm not enrolled at Alabama so I don't have ties to anything. It's been hell every single year at Alabama, and it has to stop.

I think what the majority of people do not know is that I was never recruited by The University of Alabama officially. I committed to play at Samford University in 2010. After having the winningest record in program history and winning the first conference championship, I left.

I left a full scholarship at a DI university. I had no offers, nothing set up, and nowhere to go. I enrolled at Alabama as a regular student because that is how much I wanted to be there. I tried out and made the team. I busted my butt for an entire year and was awarded a scholarship for the next year.

When I first met Coach (Kristy) Curry at a team meeting in late May before summer session one started, she just seemed to be this great person who was genuinely concerned about us as a team and the women's basketball program at Alabama. I can remember her telling us, "We are going to have the best shoe strings in the country because ya'll deserve that".

I can remember having such a feeling of relief and finally feeling what other players felt at other schools. It finally seemed liked we belonged in women's basketball because we finally had a real coach. Unfortunately, this would soon change.

After summer, the pre-season workouts began, and I personally feel like those workouts were designed to run players off.

It was just relentless -- they were just not backing down in how difficult things were regarding conditioning drills for freshman Brooksie McGraw. But with the freshman from Canada, Oceana Hamilton, they weren't treating her like that at all -- that was their player (that) they recruited, though. Brooksie was Coach Hudson's recruit, the treatment was just...wrong.

The next day, coach (Kristy) Curry gathered us in a circle and said, "Brooksie is not part of our program anymore. She's going to be at a place that fits her better. We're going to do everything we can to make sure she gets to where it's the best fit for her."

They didn't do a thing to help her.

We were confronted as a team and told by a member of the coaching staff that "it is my job to over-recruit you". Anytime we were having a bad practice or bad game we had "horrible character and were horrible people". Recruiting was always thrown in our faces.

Nonetheless, despite having the best conference record the women's basketball program at Alabama had had in the past 12 years -- after being voted to finish last in the SEC --  and finishing tenth out of 14 teams, we did not make any postseason tournament.

Our pre-conference play was where we created the deficit -- if only we had just won three or four more games we would have qualified to play in the post-season.  After finding out we did not make the WNIT tournament the night before, I went to bed relieved that the season was finally over, but nothing would prepare me for what would happen the next morning.

On March 18, 2014, I was sitting in class going about my regular day when I received a text message from Grant Fausett, our Director of Operations at approximately 8:08 am, saying that Coach Curry wanted to meet with me around 11:30am.

My stomach dropped immediately and my mind raced over all the reasons why she could possibly want to meet with me -- I hadn't done anything wrong. Maybe we were just having our end of year meetings early.

I was so uncomfortable and nervous because coach Curry had not requested to meet with me individually all year -- other than a meeting after the summer sessions ended to tell me what a great job I had done all summer. And if something was so urgent that I had to be contacted first thing that morning, why did she not text me or call me herself?

I can remember walking across campus to the gym with the feeling like my heart was beating through my chest and out of my throat. I walked in the locker room and went to sit directly on my stool in front of my locker and began praying. My point guard, Daisha, walked in and says to me, "Oh you have a meeting too?" I am thinking to myself, 'How does she know?'

Seconds after this thought crossed my mind, Kara Rawls, one of our freshman forwards who had been out all season with an Achilles injury, comes pacing in the locker room with tears streaming down her face.

And in that moment I remember feeling like I was going to pass out. I called my mother immediately. I was panicking, asking her, "What if this is it mom, what if they are kicking me off?"

I walked into Coach Curry's office, seeing every single one of my coaches sitting at this round table, with one chair open waiting for me. And it was in that moment I knew my worst nightmare was about to come true.

I sat down at the table, my heart in my stomach, the conversation began from Coach Curry: "Hey BJ, now I knew taking this job at the beginning of the year, I was going to have to make some tough decisions at the end of the season..." 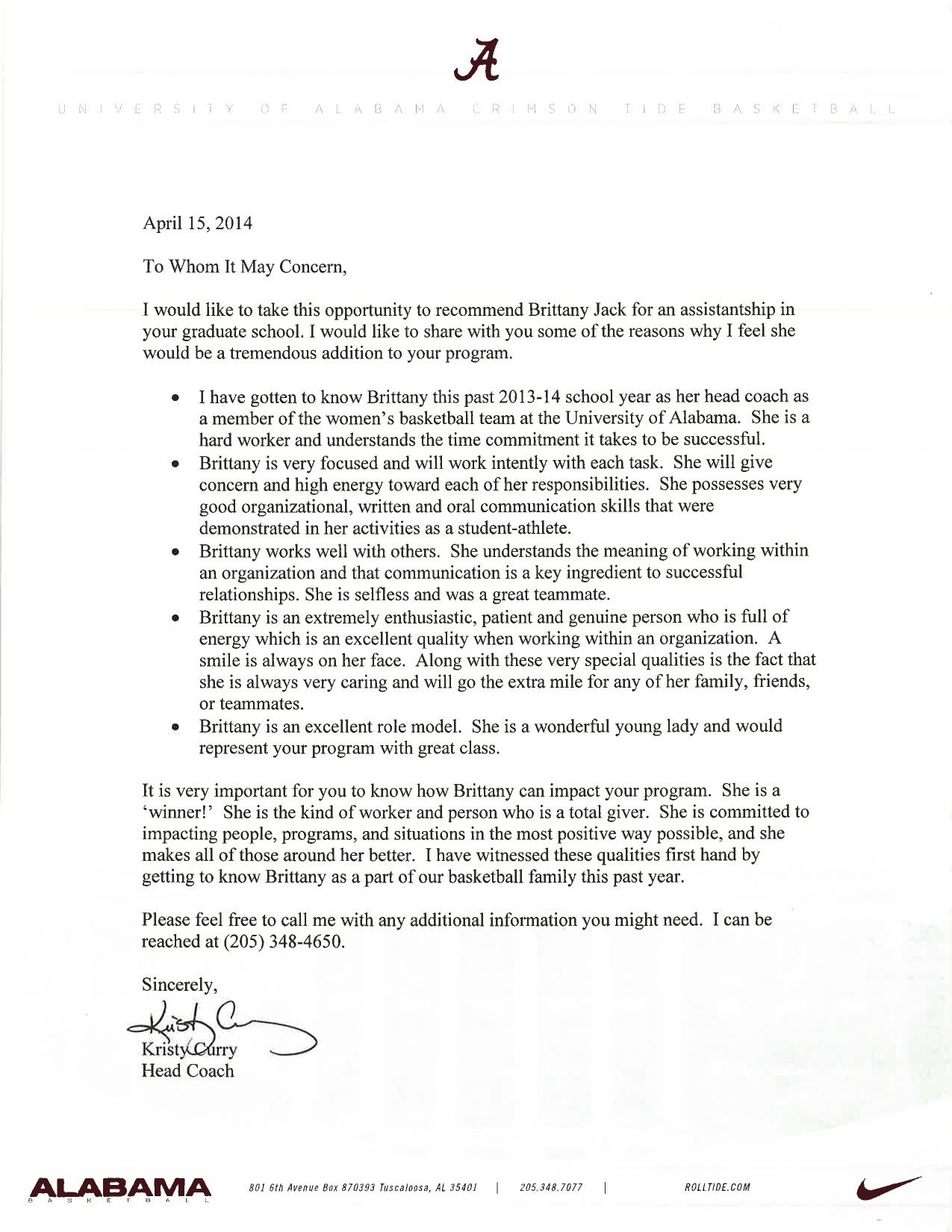 Swish Appeal has obtained a letter of recommendation dated April 15 in which Kristy Curry praised Brittany Jack as a "winner!" who "...is committed to impacting people, programs, and situations in the most positive way possible." Almost exactly a month prior, Curry told Jack she was releasing her from her scholarship.

Then, everyone took their turn and proceeded to tell me how instrumental I was in helping them get off to a great start in the program from a recruiting standpoint.  I was told that they "had never seen anything like it". I was told that I carried myself in a great manner, that I've done everything that was asked of me and go even further than what was asked of me on a regular basis.

They used me to host and recruit six players that are signed and active members on the team now.  I have played under four different coaching staffs in four years, only transferring one time from Samford University to The University of Alabama.

The one question that throbs in my head every single day is: "Is this how someone who has done all of the right things is treated?" Exhibiting such qualities as integrity, hard work, commitment, and sheer passion no longer matter?

If not, then the game we all love is being tainted by the very industry it's centered around. Is this not the kind of senior leadership and experience that is valuable to a team?  Is this the kind of message that we want to send to young women? That being a woman of integrity, selflessness, enthusiasm, and passion is not worth anything? This was the message that was sent to me that day. To this day I cannot pinpoint a specific reason why I was "released" from my scholarship.

As far as I was told it was because I'm graduating and have the life skills and am just "ready for the real world", but what was more real than this? I never had one disciplinary issue. My grades were fine. So what is the reason? WHY did this happen to me?

If all of the things I went through can help at least one person, one little girl with a dream, one player who is currently going through this now, then everything I have gone through for the past four years will be completely worth it. Every last sprint, every last all-nighter, every last long road trip, every last loss and every last tear.