We are talking pretty extensively about the Los Angeles Sparks and their ownership saga, where their former owner Paula Madison cut ties with the franchise, laid off team employees, and that the Golden State Warriors are interested in buying the team. But the WNBA and the Sparks have given no official update on their sites regarding the matter.

Share All sharing options for: The WNBA needs to be more transparent on the Los Angeles Sparks ownership situation

With many news sources right now reporting on the Sparks, you'd think that the WNBA and/or the Sparks would say something on their websites.  So, let's check.  Here is a snapshot of the league's site taken today, January 4, 2014, just before 11 a.m. Eastern Time: 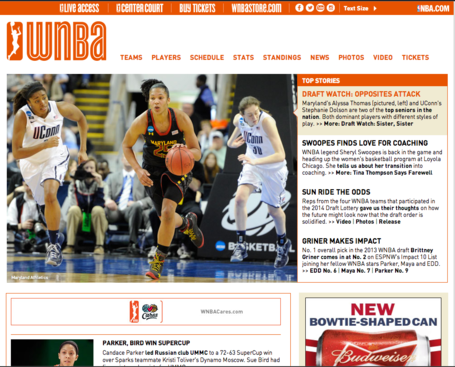 Wow, no mention or any indication about the ownership situation in L.A., and there's also no mention of the situation from the league's Facebook and Twitter accounts which I find odd at best.

Then, let's check the Sparks' site.  Even though team employees were laid off, you'd think that NBA website folks would take over and edit things as needed at that point, right?  Here's a snapshot of their site, taken on January 4, 2014, just before 11 a.m. Eastern Time: 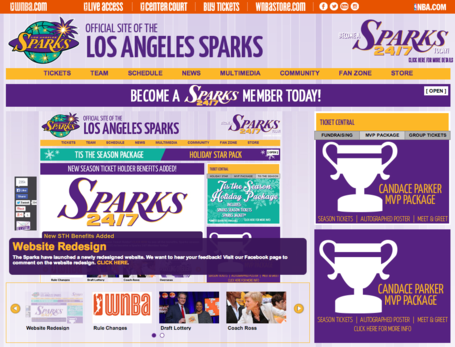 Again, no indication of anything about the ownership change.  However, what I am seeing is that it's clear that the website hasn't been updated in some time.  After all, the Christmas holiday has passed and I'm still seeing ads for Holiday ticket packages.  Like the WNBA, the team's Facebook and Twitter accounts have no mention of the situation.  But they also have not been updated since the New Year, when it would be likely that those sites would have had a "Happy New Year" post at that time.

So now, here's my opinion on this.

I get that a franchise being in limbo is bad news for the WNBA.  But seeing that the league is not saying anything publicly on the situation is worse.

So far, both WNBA President Laurel Richie and Paula Madison have just talked to other media sources instead of their own communication channels which would be their official websites and social media accounts.  But they have not, and this should be considered condescending to WNBA fans, in particular Sparks season ticket holders, who are wondering whether money they have already spent for the 2014 season will be refunded should the team relocate or fold.

The WNBA and the Los Angeles Sparks need to be transparent on their official media platforms to the public, and most importantly, their fans.  I'm not seeing it right now, and a team and a league not directly acknowledging a situation like this is one of the most despicable things that sports organizations can do toward fans.