A small group of us SB Nation bloggers have been using a shot chart app to track the shot locations of a particular volume shooter in the SEC and as I've been getting used to the app I decided to use it while watching Jerica Coley face UAB yesterday.

It just so happens that she dropped 38 on UAB in a win (boxscore), which was a good game for shot chart analysis. And I also think that seeing the shot chart for this game (in addition to extrapolating some strategic insights from the highlights above) might help to put her 12-for-35 performance in perspective. 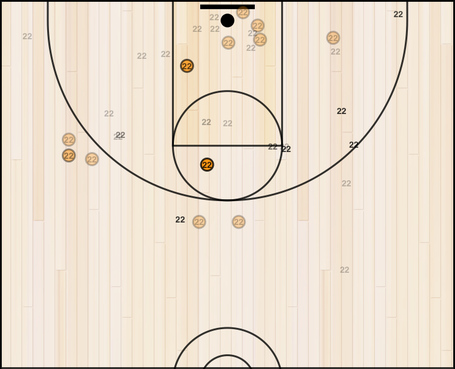 There's a lot more to say about Coley-the-WNBA-prospect that goes beyond what we can glean from one game, but we'll get to that in a future post. For now, it bears repeating that neither mid-major prospects nor pure scorers (which Coley classifies as with all the shots she puts up) have fared well in the WNBA in recent years, which definitely works against the 5-foot-8 Coley.

For more updates on draft prospects, check out our 2014 WNBA Draft storystream.