Did you know that the Sparks played in the very first WNBA game? While we wait for new Sparks news, let's go back to the simpler year of 1997.

As Albert Lee wrote, there will be days where there isn't much news on the Sparks front.  Therefore, let's take you back in Los Angeles Sparks history - about as far back as you can go - to the very first game in WNBA history between the Los Angeles Sparks hosting the New York Liberty on June 21, 1997.

Both the Liberty and the Sparks received their first assignment of players on January 16, 1997 with each team getting two players each.  The Elite Draft on February 27th boosted these nascent rosters with four more draft choices.

Nancy Darsch would be the Liberty's first coach.  Darsch had been a head coach at Ohio State and had served as an assistant coach in two Olympic games. The major players on the roster would be Kym Hamption, Rebecca Lobo, Vickie Johson, Sophia Witherspoon and Teresa Weatherspoon.  The Liberty's strength was listed as a "quick backcourt" whereas its weakness was "not much bulk in post position" according to the Associated Press breakdown of 1997 teams.

In Los Angeles, the head coach was Linda Sharp.  Sharp - a future Women's Basketball Hall of Fame member - had coached at Southern California for 12 years and had led USC to consecutive NCAA championships in 1983 and 1984.  The key players were Daedra Charles, Lisa Leslie (who was the leading scorer on the 1996 US Olympic Team), Penny Toler, Jamila Wideman - and Haixia Zheng, a Chinese player who at 6 feet 8 inches was the tallest player at the time.

The strengths listed were basically Leslie's ability to score and Zheng's height.  The weaknesses?  Zheng and Wideman had arrived late to training camp.

Sparks Watch Day 17: could LA get a new team soon?

With the Sparks apparently looking like they will be moving to the San Francisco Bay Area this summer, we ask whether the WNBA will come back to the City of Angels anytime soon.

With the possibility of the Sparks folding or relocated, those Sparks fans that have bought season tickets are undoubtedly worried that they won't see their deposit money again.

There were 14,284 fans at that very first game in the Great Western Forum.  According to Scott Earp, the game was "hailed as a battle between power house players" Lisa Leslie and Rebecca Lobo.  Before the game started, Kym Hampton and Lisa Leslie took part in a ceremonial tip-off with WNBA President Val Ackerman playing referee.

Sparks guard Penny Toler would score the first points ever in the WNBA.  Both teams struggled early, and New York center Trena Trice would key an 8-0 run early on, scoring six points during that run to put the Liberty up 18-12, a lead which the Liberty would never lose.

Sparks center Lisa Leslie would score eight points and eight rebounds in the first half, but the Liberty led 33-26 at halftime and would finish the game with a 67-57 win.  Leslie's final 16 points led all Sparks players, and she finished with 14 rebounds - but turned the ball over seven times.  (Toler also had seven turnovers.)  Liberty center Rebecca Lobo matched Leslie with 16 points and 6 rebounds, and even though Liberty point guard Teresa Weatherspoon only scored 3 points, she had 7 defensive rebounds and 10 assists for New York.

The officials for the game were Stan Gaxiola, June Corteau and Violet Palmer. 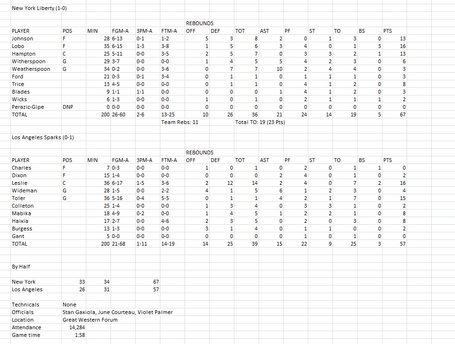 The Sparks would finish the season at 14-14.  Even though there were eight teams - four teams in both the Eastern and Western Conferences - teams went to the playoffs based on their overall finish in the league.  The 14-14 record of the Sparks was good enough to finish second in the West, but only sixth among all teams and the Sparks did not make the playoffs.

As for the Liberty, they finished with the #2 seed an a 17-11 record in the Eastern Conference, one game behind Houston.  The top four teams in the league met in a single elimination tournament, and beat Phoenix 59-41 in the semi-finals to face a team that had beaten in three out of four tries that season - the Houston Comets.  However, Houston had New York's number this time and beat the Liberty 65-51 on the way to the first of their four WNBA championships.

There is, sadly, no video of the first WNBA game.  All we have are some short clips, so check them out.  If the Sparks ending up moving - or God forbid, folding - a magic moment in women's basketball history will never be recreated again.