Texans love their stars. There's a star on the Texas state flag, they call themselves the Lone Star State and we all know that "the stars at night are big and bright deep in the heart of Texas."

"From this day forward, we're going to be the San Antonio Stars." - Coach Dan Hughes

So when the WNBA's Utah Starzz moved to San Antonio, it was no surprise that the new ownership group decided to keep the core of the name. The addition of "silver" likely had everything to do with limiting confusion between themselves and the NHL's Dallas Stars.

I guess they decided that confusion was overstated as they have announced their plans to revise the look and name of their brand. San Antonio will join both Dallas AND the Texas Stars (an Austin-based minor league hockey team) as the third Texan team to call themselves the Stars.

Video for the Stars' unveiling of their new logo and jerseys. Click here to see the full video.

The San Antonio Stars will don new jerseys with new logos in the summer of 2014 as they look to rebound from a season lost to injuries. The new logo strays away from the "shoot the moon" look the old one wore and more closely resembles the logo used by the Stars' brother organization, the San Antonio Spurs. The wordmark took on a more modern look, but the logo kept the signature windswept style that marked the previous iteration.

As the reigning Czar of WNBA names and logos, I'll give my stamp of approval to San Antonio's new look; mostly because they didn't change that much. The grey silver and black of the Spurs is a strong, unique look that looks darnn good on a jersey. Dropping "silver" seems unnecessary, but as long as the Houston Texans exist, a team named the Stars won't have the most boring name in the state.

Along with the new logo, the Stars landed a jersey sponsor in H-E-B, a gigantic supermarket chain that is also very invested in the San Antonio Spurs. This is great news for the financial viability of the club.

Below are a couple of pictures of the new jerseys with the Stars' jersey sponsor as well as a look at the new logo. Hat tip to HoopFeed for the pictures. 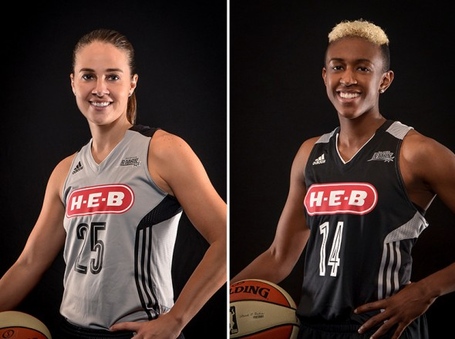