Happy Saturday everyone. On this chapter of Sparks Watch, we have some links to various pieces besides those written by the contributors on this site.

While there is no major news regarding the Sparks, here are some recent pieces around the web as other people give their thoughts on what the Sparks' situation could mean for the WNBA.

If there are things that need to be answered now, here's our list.

Day 8: Where else could the Sparks play?

We look at six different arenas in the Los Angeles metropolitan area.

Day 9: Questions we want answered now! Day 8: Where else could the Sparks play?

1. Embed to an ESPN video you can see above (or click here) - Michelle Smith and Rebecca Lobo discuss the Sparks' ownership situation, their thoughts on the Golden State Warriors' interest on the team, and how this could impact the WNBA schedule.

2. Link to an article by Patricia Babcock McGraw of the Daily Herald based near Chicago - This article gives some thoughts on the same question we offered in Day 5 of our series. Chicago Sky owner Michael Alter was interviewed for the piece and here's the money quote regarding LA:

There's no way to sugar coat what's happening with the Sparks. No one's happy about it. But the Houston situation is a good example. At first, so many people were like, 'Oh my God, that's it. It's over (for the WNBA). But the league moved on, and we've seen that it actually got stronger.

3. Last Monday, we put out a note that two Sparks fans, Chris Woodmansee and Callan McClurg created a petition to save the Sparks, and keep them in Los Angeles - Now, over 500 fans have signed the petition. Click here to get to the petition directly to add your name if interested.

4. Last Saturday, I put out a piece that the WNBA is not being transparent regarding this situation by not updating its website - So you'd think that the NBA's website staff would finally update the site or the Sparks', right? They did alright. Here's a snapshot of WNBA.com from Friday, January 10: 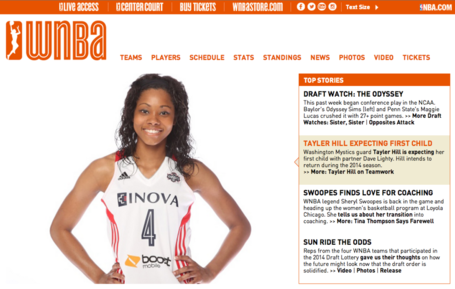 Well, with Tayler Hill, it just so happens that...uh...

WE COVERED THAT STORY OVER A MONTH AGO!

As for the Sparks' site, as you might have expected...nada.

I am at a loss of words regarding this league's silence and lack of acknowledging the situation. Even if it's just a couple sentences from the NBA's head of PR, something is better than nothing. Really, it is. Anything else I have on this would be like NFL punter Chris Kluwe's rant against the Pro Football Hall of Fame selection committee and their lack of respect regarding putting a punter in Canton, most notably Ray Guy who is a senior nominee this year. So I'll stop while I'm ahead.

5. FanPosts - When major stories happen, it gives plenty of opportunity for FanPosts in order for us to discuss all sides of a situation. al reyes 86 wrote a number of FanPosts on the Sparks over the last day. He has a take on why the WNBA won't fold anytime soon, why the Sparks should move to the Long Beach Arena, and some takes on how the WNBA can improve.

There may be other links on the web regarding the Sparks as well, so feel free to share them in the comments. And if you have a long thought, like al reyes 86, click here.