2013 WNBA Playoffs: How the Phoenix Mercury beat the L.A. Sparks to advance to the Western Conference Finals

The Phoenix Mercury defeated the Los Angeles Sparks 78-77 in Game 3 of their Western Conference semifinals series to advance to the Western Conference Finals. Although the final moments of the game made for dramatic highlights, there was one primary statistic that explained why the Mercury won the game.

Share All sharing options for: 2013 WNBA Playoffs: How the Phoenix Mercury beat the L.A. Sparks to advance to the Western Conference Finals

Last second heroics (or failures) can sometimes obfuscate the actual narrative that shaped the previous 39 minutes or so of a basketball game.

Seldom is a perfectly executed game lost on the last play; usually it's a combination of minor mistakes and wasted opportunities throughout a game that undermined a team's chances to win a game without the need for heroics.

Game 3 of the Western Conference semifinals last night was an example of where this dynamic sort of cut both ways: Brittney Griner's game-winning shot will eventually wash away the memory of multiple technical fouls picked up by the Mercury in a one point game; Candace Parker's inability to create something out of nothing on the last possession of the game will be a magnet for individual blame and hypercritical talk about her value as a player.

But in the end, neither Griner nor Parker deserve sole responsibility for the fates of their teams: there was a far more significant theme that ultimately made it possible for the Mercury to be in position for a last second shot on the road in the first place.

More: GIFs of the final possessionsBright Side of the Sun recaps an "instant classic"Mercury-Sparks series storystream

And Sparks coach Carol Ross summed it up perfectly after their win in Game 2.

We've sort of beaten this theme to death this season, but it's hard to avoid being redundant after the way that series turned out for the Sparks: the Sparks have a really bad habit of settling for jumpers and, when they do, they become very predictable and extremely easy to defend. Making matters worse was that the Sparks was their success relied heavily on outshooting opponents this season because they had a bit of a turnover problem and weren't a particularly strong rebounding team. Further exacerbating things, they were only an average 3-point shooting team which means they were susceptible to being suffocated by their own poor spacing.

So there was one thing the Sparks couldn't afford to allow in this series: for the Mercury to be the more efficient shooting team. And unfortunately, the Mercury not only established an advantage but also dominated the category in their two wins.

Four Factors statistics for Los Angeles & Phoenix in Games 1 & 3 of the first round of the 2013 WNBA Playoffs.

Despite the narrow margin of victory in Game 3, the shooting efficiency differential was pretty much identical to what you see above (51.49% to 40.85%). Maybe it's a stretch to say that it's impossible to overcome a differential like that, but it's very, very difficult to do so, as evidenced in Game 1 by the Sparks' significant offensive rebounding advantage (13-4, no percentages needed).

When a team gets outshot that badly, it's never the fault of one player but it was obvious coming into the series that the Sparks would struggle if guard Kristi Toliver had a poor performance. Unfortunately, her performance in Game 3 was sort of emblematic of the season-long trend that Ross described. 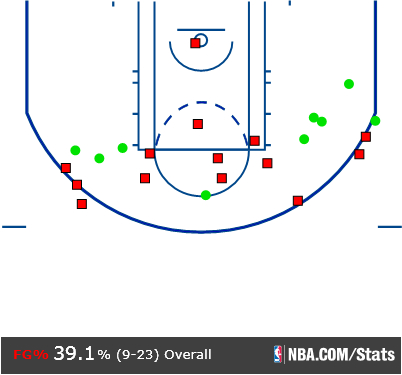 Kristi Toliver's shot chart in Game 3 of the first round.

Toliver's shot chart from Game 3 provides a visual of multiple things that went wrong for the Sparks in the series.

The point here is not to blame Toliver for the loss (in Games 1 or 2) - the Sparks got so little from the rest of their roster that Parker and Toliver had a difficult burden placed upon them. But the point is that the Sparks simply weren't getting high efficiency shots. And when they did get the ball inside to Ogwumike and Parker in the second half, they just weren't hitting them: the Sparks' starting frontcourt combined to shoot 4-for-13 in the second half.

But the reason I added the the synergy and assisted field goal numbers there is that they tell another layer of this story for the Sparks: not only was there a problem with "diversity" of shots, but they simply weren't moving the ball all that well for the most part (until the end of the game when it looked like nobody wanted the ball).

Assists aren't always a great measure of success: when a team is shooting as poorly as the Sparks were, assists are bound to be hard to come by. But a team with under 40% of their field goals coming with the aid of assist is generally not a team moving the ball very well. The synergy rating reflects the combination of the low assisted field goal percentage and their inability to get high efficiency shots (read: they couldn't knock down threes).

In stark contrast, the Mercury moved the ball just fine.

Even though the Mercury's shot selection wasn't always impeccable - near the end of Game 3, it seemed like the winner would be the team that did the least self-harm - they did a very good job moving the ball in their wins. And a large part of that was due to Taurasi's efficiency as their lead ball handler.

In the Mercury's two wins, Taurasi had a combined 17 assists and just 3 turnovers, including her 10 assists along with 18 points and 5 rebounds in Game 3 - that's a 10.41 pure point rating, which is the mark of an elite point guard. To make a long story the short, the Sparks didn't appear to have an answer for Taurasi entering the series and they never really found one. And that's not to ignore Taurasi's 6-for-19 shooting performance in Game 2 when she seemed to struggle a bit with balancing her roles as distributor and scorer - when Taurasi was in attack mode, the size advantage she had over the Sparks backcourt became even more significant as she was confident passing over them in double team scenarios and shooting over them when isolated.

And she was particularly effective in pick and roll situations.

Although Dupree made a name for herself early in her career with the touch on her mid-range jumper, she was able to showcase her toughness on the interior this series. And she played a particularly significant role in Game 3: using a combination of pick and rolls and drives to the basket - and finishing with both hands - Dupree had 20 points in the first half before going just 1-for-6 in the second half. With Taurasi hitting shots on the outside and Dupree looking unstoppable for half of Game 3, the Sparks struggled to keep up with the Mercury's offense even in L.A.

Then after nearly 40 minutes of effectiveness from everywhere else on the floor, the Mercury went to their weapon of the future on the final possession: Griner and the soft touch on her jumper.

Sparks MVP: Candace Parker isn't to blame for the first round exit

Game 2 proved that the Sparks were capable of victory, even on the road, with Toliver off her game; anything is possible when Parker is attacking the basket, rebounding, and generally making good decisions. Although the breadth of Parker's talent can send the imagination running wild, she and the team are at their best when she's imposing her will on the interior.

The final two possessions of the Sparks' season accentuated the point: on Parker's go-ahead bucket before Griner's game-winner, Parker faked a handoff turned and went right to the rim. It was a well-designed play that used both the threat of Parker's ability as a playmaker and her ability as a post scorer to create an easy bucket. On the final play of the game, Parker was asked to create something from the perimeter, which would have required a superhuman effort given that the Mercury were bound to send a double team her way no matter what. It didn't help that she got the ball in the corner.

Despite the hype and a pair of MVP awards, the reality is that Parker can't do everything for the Sparks - it wasn't even reasonable for her to create anything out of that final play. And that gets to something else: Parker didn't get a whole lot of help in the Sparks' two losses; Toliver did lead the team with 22 points in Game 3, but she needed 23 shots to do it. Prize offseason acquisition Lindsey Harding, had 6 assists and 5 turnovers in Games 1 & 3. Obviously nobody got anything going from the 3-point line.

Yes, Parker is the MVP and MVPs are expected to work miracles, but basketball is still a team sport and the Sparks simply did not get it done.

A loss in the first round would've been disappointing for either team, but it's a worse situation for the Sparks: as Jake Sundstrom noted before the series, the Sparks had to make the Finals this season. Even another loss in the Western Conference Finals would've been stagnation, though perhaps a reasonable hurdle to be overcome. With a loss in the first round to the Mercury, the Sparks are unavoidably going backwards: the Mercury are only going to get better as Griner adjusts to the league and they figure out their coaching situation. Sue Bird and Lauren Jackson will be coming back to the Storm looking for their third title together. The Lynx will still be the Lynx.

The Sparks can't afford to stand pat if they want to work toward a championship - it's not unreasonable to believe that the Sparks could end up battling to keep themselves out of fourth place next season. That doesn't mean they're on the dreaded "treadmill of mediocrity", but this series against the Mercury makes it very difficult to believe that this current roster can break through to the WNBA Finals.

For more on the final game and the series, check out our Mercury-Sparks series storystream.