2013 WNBA Playoffs: How the Minnesota Lynx swept the Seattle Storm

The Minnesota Lynx defeated the Seattle Storm 58-55 in Game 2 of the first round of the 2013 WNBA Playoffs to return to the Western Conference Finals. And they did so in unsurprising fashion.

Share All sharing options for: 2013 WNBA Playoffs: How the Minnesota Lynx swept the Seattle Storm

A lot had to go right for the Seattle Storm to even win one game against the Minnesota Lynx in the first round of the 2013 WNBA Playoffs.

And for a time in Game Two, things were good: the Storm went into halftime tied with the Lynx, probably considered a victory in the minds of most people.

The dominant narrative was that the Storm "uglied the game up", playing physical ball to make the game sloppy. But on closer examination of what happened, that doesn't quite tell the full story - as Tina Thompson alluded to at halftime, they weren't necessarily even the team setting the physical tone.

In the first quarter, the Lynx were their own worst enemy as they settled for a number of perimeter jumpers - the two shots they did make in the paint were fast break layups off of Storm turnovers. Removing those shots from the equation, just 3 of 15 shots for the Lynx came around the basket. 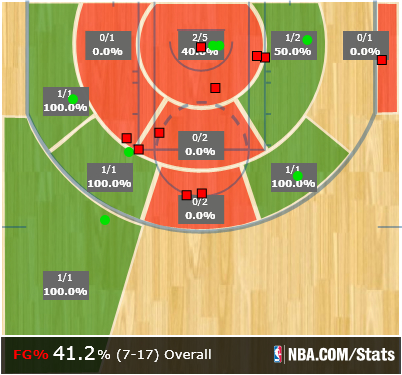 Minnesota Lynx first quarter shot chart against the Seattle Storm in Game 2 of the first round.

In the second quarter, there was a similar story but you got a much better sense of what makes the Storm's defense tick. 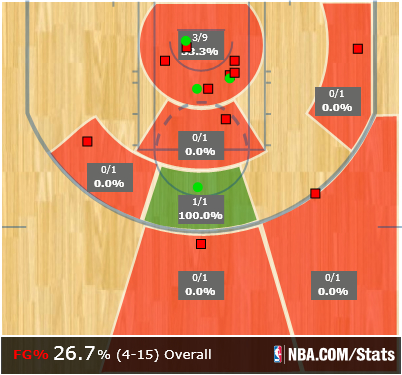 Minnesota Lynx second quarter shot chart against the Seattle Storm in Game 2 of the first round.
(One shot in the inner circle is mis-marked.)

The Lynx clearly looked to correct for their first quarter shot distribution - they did get to the rim, although 3 of their 8 shots around the basket came on one possession - but every single one of their shots were contested. And really, shots were not just "contested": 2-3 Storm defenders with hands raised high surrounded the shooter on almost every shot, making for extremely difficult scoring opportunities.

While the interior defense stood out for most of the game, the pressure on the perimeter was also essential to the Storm's success. They generally closed out on 3-point shooters well and conceded long mid-range shots that are generally less efficient scoring options.

Defensively, Tanisha Wright was a part of that perimeter effort both setting the tone at the top of the defense and making things difficult - or as difficult as possible - for Maya Moore when she was guarding her at times. Offensively, Tanisha Wright was an outstanding 14-for-24 for the series - by far the Storm's most consistent scoring option - and her grit on both ends seemed to be the engine that kept the team going throughout both games. Her scoring efficiency allowed the team to go bigger defensively with Temeka Johnson on the bench and Alysha Clark and Noelle Quinn on the wings.

Game 2, even in its botched ending, was blue collar Seattle Storm basketball at its best. The Storm played outstanding interior defense and made things extremely difficult for the Lynx. The Storm were aggressive and the refs were either letting things go or missing calls depending on your perspective, but that began with outstanding rotations and communication to be in position to challenge nearly every shot and pressure up on ball handlers.

The second half featured similar defense, though the Lynx just continued to make a concerted effort to go inside and eventually found ways to get buckets. But shot charts like that would often be enough to earn a win, even if they sabotaged themselves a bit with turnovers.

Ultimately what led to the Lynx winning the series was their most dominant strength.

The Lynx have been the most consistently dominant rebounding team for three years now and finished the regular season as the best offensive rebounding team in the Western Conference despite a lull after the All-Star break.

And the Storm simply had no answer for that.

Four Factors statistics for the Minnesota Lynx & Seattle Lynx in the first round of 2013 WNBA Playoffs.

There was really one thing that won the series for the Lynx: offensive rebounding.

The Storm did pretty much everything else they had to do: in Game 2, they did better in shooting efficiency, turnovers, and free throw rate (and yes: again, we could critique how much the refs let go there). But the Lynx managed to get a lot of it back by getting second and third chance points to overcome their shooting woes.

Part of the Storm's inability to rebound was a direct byproduct of their aggressive defensive rotations: by sending 2-3 defenders at one shooter, the Storm weren't in position to prevent the Lynx from getting an offensive board. And really, that's a reasonable concession: the Storm weren't a good rebounding team anyway this season. Had they shot a little better, made close range shots, and shot better than 6-for-11 from the free throw line they could have won that game even with the number of turnovers they committed and rebounds they gave up.

When rebounding is the theme, obviously Rebekkah Brunson is going to play a starring role. Brunson averaged 4.5 offensive rebounds per game in the two-game series and her never-ending tenacity on the offensive end helped power the Lynx through the Storm's defensive intensity.

Defensively, she was just as critical as her athleticism allowed her to guard the likes of Camille Little or Tina Thompson on the perimeter. But the bottom line is that you don't dominate the boards the way the Lynx did - even against a poor rebounding team - without the effort of a player like Brunson.

In a game like Game 2 though, the Lynx still needed someone to step up and make things happen when the entire team was struggling to find quality scoring opportunities.

In this series, that was Maya Moore.

Clearly, she's making a name for herself as a great scorer, but she also showed in this series why she was the MVP runner-up: Moore was more than merely a scorer in this series. In Game 1, it was her game-high 6 assists (to 1 turnover) when her shooting wasn't stellar. In Game 2, she was definitely hot in a game when the Storm were making everything difficult but she tied a game-high with 3 steals, contributed 7 rebounds to Minnesota's biggest advantage, and added another 3 assists (to just 1 turnover).

This wasn't really a series about statistics at all though: it was far more about hunger. And the Storm were scrapping for whatever they could get while being stingy with what they allowed the Lynx to have. Yet the Lynx simply had more weapons: outworking Brunson is not something that's going to happen often. Although Lindsay Whalen didn't post outstanding statistics, she helped guide the Lynx through the Storm's pressure. And Maya Moore is just not going to stay quiet in a three-game series - she's becoming a well-rounded player who can find ways to have an impact.

But that's just the thing with the Lynx: you can't make even the relatively few mistakes the Storm made and expect to beat them, home or away.